News You Can Use: Support for Veterans Can Extend Beyond V-Day 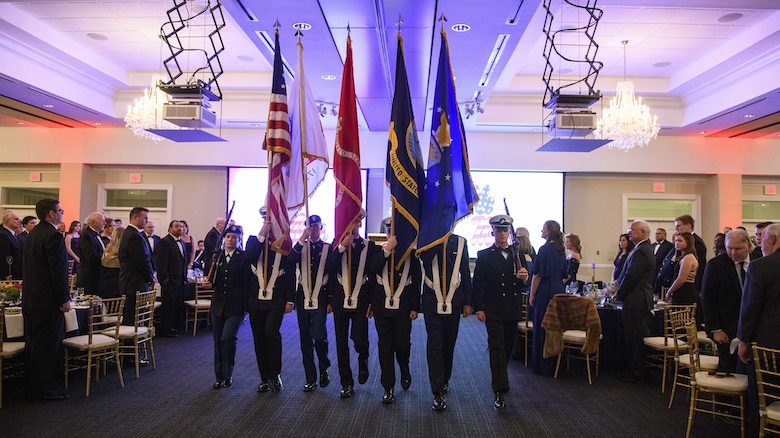 A color guard of the University of Mississippi ROTC programs displays the flags of their respective military units during a Veterans Day celebration at the Inn at Ole Miss. Photo by Thomas Graning/Ole Miss Digital Imaging Services

With Veterans Day right around the corner, military experts at the University of Mississippi are offering a variety of suggestions for those who want to honor veterans. And many of those gestures, they say, can continue year-round once the holiday comes and goes.

Maj. Seth Davidson, executive officer of the Ole Miss Army ROTC program; and Scott Caldwell, recruiting operations officer; each have served decades in the armed services and been deployed overseas for multiple tours. Both said that showing kindness and appreciation to veterans and soldiers makes a powerful, positive impact on their morale and mental stability.

“People in Mississippi are pretty patriotic already,” Davidson said. “It only takes a moment to make gestures, but the impact of such actions is deep and lasting.”

“All American patriots should observe and celebrate Veterans Day as a time to reflect on the freedoms this country provides and the men and women who continue to stand guard and protect this country from all enemies, both foreign and domestic,” Caldwell said.

Both men offered the following suggestions for demonstrating patriotism on Veterans’ Day, which is Nov. 11, and beyond:

First called Armistice Day, Veterans Day was established by Congress in 1938 to remember the end of World War I on Nov. 11, 1918, when the Allies and Germany stopped fighting on the 11th hour of the 11th day of the 11th month. After the Korean War, Congress changed the name of the national holiday from Armistice Day to Veterans Day to include veterans of all wars in the national holiday.