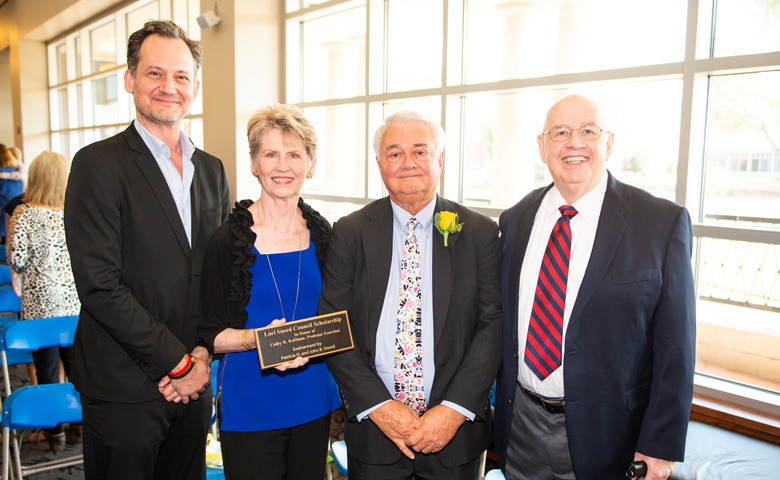 As a University of Mississippi student, the late Lori Sneed almost instantly formed a special bond with English professor Colby Kullman, and soon the feeling was mutual. Now, the two “great friends” will be linked in perpetuity by a new Ole Miss Women’s Council (OMWC) scholarship endowment bearing their names.

The $250,000 Lori Sneed Council Scholarship Endowment in Honor of Colby H. Kullman, Professor Emeritus was established as a gift to the University by Sneed’s parents, John B. “Shorty” and Patti Sneed of Gulfport, Mississippi.

The scholarship’s recipients will be entering freshmen who are English majors chosen by financial need, academic ability and leadership potential. Contingent upon maintaining a 3.0 GPA, the award may be received for a maximum of eight semesters. In addition to their academic pursuits, the scholars will be expected to participate in leadership development and mentoring sponsored by the OMWC and the Lott Leadership Institute.

“We are deeply honored that Colby allowed us to honor him along with Lori because he was her favorite teacher, without a doubt,” said Shorty Sneed, adding that Kullman of Oxford, Mississippi, agreed to participate as the mentor for the scholarship’s first recipient.

Lori Sneed, who died of liver cancer in July 2017 at age 44, suffered a paralyzing spinal cord injury in a 1991 car accident during her freshman year at Ole Miss. After months of rehabilitation and a year at Mississippi Gulf Coast Community College, she returned to Ole Miss to complete her bachelor’s degree in liberal arts, majoring in English.

Kullman recalls a special memory he has of his favorite student, who was always prompt for class.

“One day she didn’t appear and I thought, ‘I wonder what’s wrong.’ Well, 10 minutes into class, suddenly there’s this police officer with Lori in her wheelchair. Both looked a little bit winded. I thought, ‘Oh my goodness, did she get arrested?’” Kullman remembers. “But she had parked her van and some unthoughtful person had parked behind her, so she was trapped in her van. Well the police officer helped her out of the van, got her into the chair and brought her to class.

“She always deflected attention away from herself, so she said, ‘This is Officer Clark. He is my hero today. He just rescued me from my car. Let’s hear it for Officer Clark!’ And there was a round of applause and she said, ‘You can do better than that!’ And they all stood up and gave him a standing ovation.”

He is a published author and editor of a number of academic works, including “Speaking on Stage: Interviews with Contemporary American Playwrights;” “Studies in American Drama: 1945-Present” and “Death of a Salesman at Fifty: An Interview with Arthur Miller.”

Lori’s uncle, Bill Henry, quoted in Gulfport’s Sun Herald, said that beyond her humor and strength, Sneed was exceptionally kind.

“For me, the thing about Lori was, when you were with her, she always made you feel as if you were the nicest thing that happened to her,” he said. “She asked how you were doing; she’d compliment you about something you were wearing. … It’s like you were the absolute highlight of her day.”

At Ole Miss, she was a Campus Favorite, member of Pi Beta Phi sorority, member of the UM Committee on Disabilities and a two-time winner of the Most Beautiful Eyes on Campus contest, before and after her accident.

After graduation, she moved to Atlanta, Georgia, where she worked in public information for CNN from 1997 to 2006. While in Atlanta, she performed self-deprecating humor in comedy clubs, telling audiences they should request their money back if they were expecting a stand-up comedian. Additionally, she loved art, poetry, music and animals.

She returned to Gulfport in 2015, where she attended St. Mark’s Episcopal Church and worked as a self-employed artist.

Her love for her family was deep.

“Nothing brought her more pride than when her mom and dad came to Atlanta so Lori could bring them to CNN or to go to dinner with them and her Atlanta friends,” said Tom Johnson, former president of CNN, delivering a eulogy at Sneed’s funeral.

During a recent OMWC ceremony, officially dedicating the endowments, Shorty Sneed said he remembers the day his daughter, who never thought of herself as disabled, called to say that she would casually roll through the background of the CNN news broadcast.

“Look for me. I’ll be wearing a blue blouse and some gray slacks,” she told him.

“I said, ‘Lori I think you’ll be the only person in the newsroom in a wheelchair. I think we’ll be able to pick you out.’ And she rolled through and just kind of looked at the camera,” her father said, laughing. “She never let (her disability) hold her back in school or at work at CNN or in her social life.

“She once asked one of Oxford’s finest on the Square one night if he would follow her home so she wouldn’t get a DUI. He did. And she didn’t.”

Johnson remembers Lori Sneed’s jovial spirit, an affable charisma that kept her coworkers both on their toes and in good humor.

“For me, there has never been a more inspiring example of optimism, of warmth, of courage, of humor and of love than Lori,” he said, remembering the many times she would navigate her motorized wheelchair at full speed into his office with one announcement or another or to meet visiting dignitaries or celebrities.

“One day, she wheeled into my office to tell me that the doors at CNN were not wheelchair friendly, especially the one down the hall from her office on the sixth floor,” Johnson said. The doors at CNN Center became accessible within a week.

Lori Sneed did things and got things done.

Even now, her brother Johnny Sneed, an actor in Los Angeles, California, gives his sister credit for shaping his personal life. A series of events initiated by Lori resulted in Johnny’s introduction to his fiancé, Cristina; the two are now parents to a 1-year-old boy.

“Lori passed away in July and my baby boy, Wilder, was born in August,” Johnny Sneed said. “A big regret of mine is that they weren’t able to meet, but I know that she’s with us. We see her in different ways every day.”

“This OMWC scholarship honors Dr. Kullman and an extraordinary, vivacious young woman who tragically lost her life while living it to the fullest,” Clinton said. “The generosity of this gift, which overwhelms our hearts, will continue for many generations to give OMWC scholars a four-year academic and cultural program to prepare their lives to be world-ready upon graduating. Our hope is the life Lori lived will inspire her scholarship recipients to always strive to achieve the best version of themselves, despite the circumstances.”

Read more about the Women’s Council at www.omwc.olemiss.edu. For information on how to make a gift to support OMWC programming or a scholarship, contact Suzanne Helveston, development associate, at shelveston@olemiss.edu or 662-915-2956.