As students move back to campus this week at the University of Mississippi, more than 850 of them are getting keys to the state’s newest residence halls.

The “Ridges” – Ridge North, Ridge South and Ridge West – open less than 15 months after construction began in June 2011. The three buildings, along Rebel Drive on the former site of Miller Hall, cost $39.3 million and provide many of the amenities requested by students, including private bathrooms, microwaves and refrigerators in each room, study rooms, community kitchens and lounges with TVs on each floor.

The new halls will help the university provide for an ever-increasing student body. UM enrollment has surged by 6 percent each of the past three years, and more than 3,000 freshmen are expected to enroll this fall. Each of the three buildings can house between 250 and 340 students. 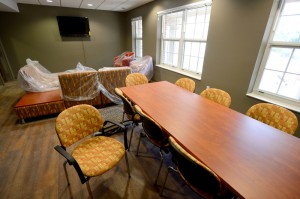 Each floor in the Ridges includes a television lounge for residents.

“We have received an overwhelming response from our students,” said Jennifer McClure, assistant director for marketing in the Department of Student Housing. “They are very excited to have these opportunities and live among students with similar interests and goals.”

LLCs include Business, Global Perspectives (designed for international studies and modern languages majors as well as for international students), STEM (science, technology, engineering and mathematics), Honors College, Provost Scholars and FASTrack. In FASTrack, small groups of students take three courses in common each semester, thus allowing them to study together and support one another.

FIGs include Foundations, which focuses on developing leadership skills and community service, and The Well, which focuses on cultivating and maintaining healthy lifestyles. The freshman interest groups started last year in other residence halls, and students’ comments on them have been favorable.

“The FIG was a great place for me to get my feet on the ground as an out-of-state student and to learn when and where to get involved, especially through the help of my RA (resident assistant),” said Phillip Schmidt, an accountancy major from Cypress, Texas. “Not only were we able to get involved around campus, but also our FIG floor has created an unmatched community, from living on the same floor to going on trips with everybody.” 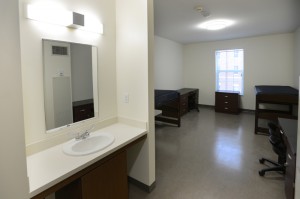 All rooms in Ridge dorm are double suites, each with two desk, two dressers, two elevated beds, double closets, a sink and a private bathroom.

Political science major and Vicksburg native Kimberly Hardges said, “As an incoming freshman, I was worried about making new friends, being involved in the Oxford community and maintaining a high GPA. The FIG program gave me a chance to do all of those things.”

Because of their positive experiences in the residence halls last year, both Schmidt and Hardges have chosen to serve as RAs this year. They will provide leadership and plan events for members of their residence hall communities.

Although not officially named, the new residence halls have been dubbed the “Ridges” in honor of Larry Ridgeway, who retired earlier this summer as vice chancellor for student affairs