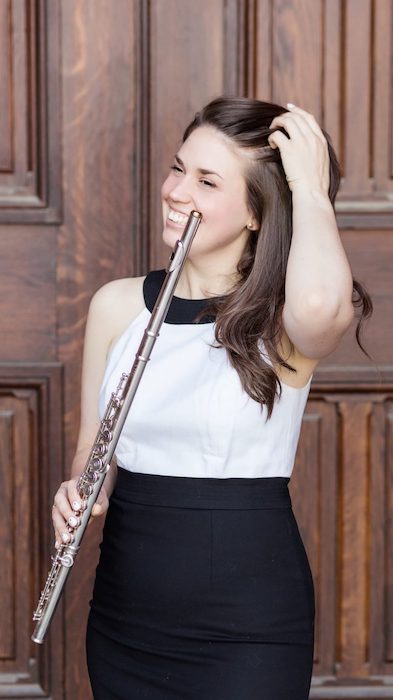 Graham, who joined the faculty in August, will be accompanied by Adrienne Park, instructor of piano, for the recital, set for 7:30 p.m. in Nutt Auditorium.

Graham said she will perform some of her favorite works for flute, including two of her favorite French composers. Debussy’s “Bilitis, Six Épigraphes Antiques” for flute and piano was based on poems by Pierre Louys called “Chanson de Bilitis.” Amanda Johnston, an associate professor of music, will perform the original poems in French as a part of the recital.

“This work is intense, mystical and sometimes even a bit terrifying. It is also known as one of the most difficult works ever written for flute.”

The program also includes two pieces by living composers inspired by jazz. Graham and Park will perform Amanda Harberg’s “Court Dances,” a 2017 three-movement work for flute and piano that is written to conform with the structure of baroque dances, which makes a pleasing counterpoint to its modern, jazzy musical style.

Pianist Park relishes the collaboration with Graham. “I love the variety of the program, and am enjoying getting to know a new work for flute and piano by American composer Amanda Harberg,” she said.

Graham will perform a solo flute piece by David Heath that was written in tribute to jazz great John Coltrane.

“The piece features a flashy, jazzy, improvised style and is one of my favorite pieces for solo flute,” she said.

Although this is her first solo recital, Graham has performed on campus with the Faculty Woodwind Quintet, as a guest performer with Adam Estes and as part of the First Tuesdays in Bryant Hall noontime music series.

Tickets for the recital are $10 for the general public or $5 for children and those with an Ole Miss ID. They are available at the Ole Miss Box Office and at the door.