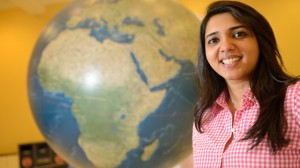 University of Mississippi junior Shruti Jaishankar of Ridgeland could have attended any college on her long application list in 2010 when she graduated from St. Andrew’s Episcopal School as a National Merit Finalist.

In choosing her college destination, Jaishankar held at least two convictions: She knew she wanted to study international relations in preparation for her long-term goal of joining the Foreign Service and working for the U.S. Department of State, and she was seeking an environment with other students who are serious about becoming the best they can be.Upon learning about UM’s Croft Institute for International Programs, she was sold.

“We are thrilled to have a student of Shruti’s caliber in the Croft Institute,” said Kees Gispen, Croft director. “I have taught her and seen her in action in other classes and, based on that, I can say with confidence that it’s easy to imagine Shruti as a future Foreign Service officer or in any one of a wide variety of responsible international service positions.”

Upon closer look at the university, Jaishankar also was attracted to the Sally McDonnell Barksdale Honors College, which she thought would add value to the package.

“Both Croft and the Honors College have allowed me to study with students that take their education as seriously as I do,” she said. “They have given me the opportunity to travel and interact with great minds, such as Attorney General Eric Holder and famed poet Robert Haas, and pushed me to stretch my mind and have made college rewarding and fun.”

As for travel, Jaishankar spent summer 2011 studying in Quito, Ecuador, and she is enrolled this semester at the Pontificia Universidad Catolica de Valparaiso in Chile. Her Ole Miss tuition covers her expenses, and she is earning academic credit, with majors in international studies, political science and Spanish. She thinks it’s a good deal.

“I think studying abroad is the best experience a student can have while finishing an undergraduate degree. It allows you to see America through the lens of other countries and leads to a greater understanding of how the world works. The United States is not alone in the world, and it’s important to develop relationships with people from different countries so we can become truly thankful for the privileges we may take for granted, while also learning to understand the flaws of our own society.”

She chose Chile for her study destination because she plans to write her honors thesis about how American electoral laws compare with those around the world.

“Since my concentration in Croft is in Latin America, I chose Chile because it has a unique electoral system with a fascinating history, and I also wanted to experience the rich Chilean culture and travel to regions like Patagonia.”

She expects to get a firsthand look at the country’s culture while living with a host family and commuting to classes at the PUCV.

Jaishankar is slated to graduate from Ole Miss in May 2014, with bachelor’s degrees in both international studies and political science. She hopes to land an internship with the White House or the Department of State, before continuing her education.

“I want to eventually apply to a (juris doctor/master’s) program, where I’ll finish a law degree and a master’s in international relations.”

Besides her academic enrichment and travel abroad, Jaishankar has been rewarded in other ways since arriving on the Oxford campus.

“Ole Miss has taught me to interact with people from many different backgrounds and all walks of life,” she said. “I truly think I’ve become a kinder person after spending so much time among the warm and welcoming Ole Miss community.”