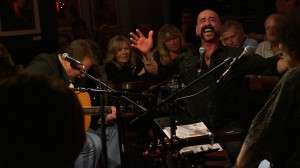 Inspiration can strike at any time, even while searching through an old junk pile. For documentary filmmaker Rex Jones, the inspiration for his upcoming film came while studying old Coca-Cola bottles.

“I’m always looking for movie ideas and I’m lucky here in that I have the freedom to make movies that reflect both my own interests and the mission of ‘South Docs’ and the center,” said Jones, a producer-director at the Southern Documentary Project (formerly Media and Documentary Projects), an institute of the Center for the Study of Southern Culture at the University of Mississippi.

As a child in Hickory, Jones was only eight miles from the Coca-Cola bottling plant in Newton, and he recently rediscovered his stash of old bottles at his mother’s house. After Googling “Newton Coca-Cola bottles,” he found the blog of Jimbeau Hinson, also a native of Newton, who had written about picking up Coke bottles from the ditch and selling them for a nickel apiece.

“Jimbeau was 15 or 20 years older than me, and I had never heard of him, but he grew up right down the road from me,” Jones said. “I knew I had to make a movie about him because he has had an incredible life.”

Jones reached out to Hinson, a 62-year-old Grammy-nominated singer-songwriter living in Nashville, who has been HIV-positive for more than 30 years, and found an enthusiastic subject. Hinson was the first openly bisexual singer-songwriter in country music, whose notable writing credits include “Fancy Free” by the Oak Ridge Boys, “Hillbilly Highway” by Steve Earle, “Broken Trust” by Brenda Lee and “Party Crowd” by David Lee Murphy.

“I asked him later on, as we got into the process, how long it took him to decide if he should be involved in the project, and he said about half a second,” Jones said. “So he was very enthusiastic about doing it, so it was serendipity, or as he called it, kismet.”

Hinson will also appear as the featured musical guest on “Thacker Mountain Radio” before the film’s premiere. In 2012, he released a new album, “Strong Medicine,” a record of songs mostly written in the 1980s, chronicling his struggle with his HIV diagnosis.

“I think God gave me a big enough heart to love everybody,” Hinson said in the film.

Jones began working on “Beautiful Jim” in March, taking three trips to Nashville to film interviews with Hinson and his wife of 33 years, Brenda Fielder. Those interviews, combined with scenes of life on their farm and live performances from the Bluebird Café and Douglas Corner Café, turned into a 53-minute production.

For Jones, one of the joys of making the film was getting to know his subjects, whom he referred to as the most wonderful people anyone would want to meet.

Hinson may be HIV-positive, but he doesn’t let his status define him, and it was a life-changing experience for Jones to be around such an impressive, unique person.

“Jimbeau and Brenda are gracious, kind, generous and funny,” Jones said. “One of the greatest pleasures – and challenges – of documentary filmmaking is the opportunity to gain a relatively quick intimacy with people. The time I spent with them was among my most rewarding ever, in both the professional and personal senses. I believe we came away with a powerful film, and I know I came away with two new friends.”