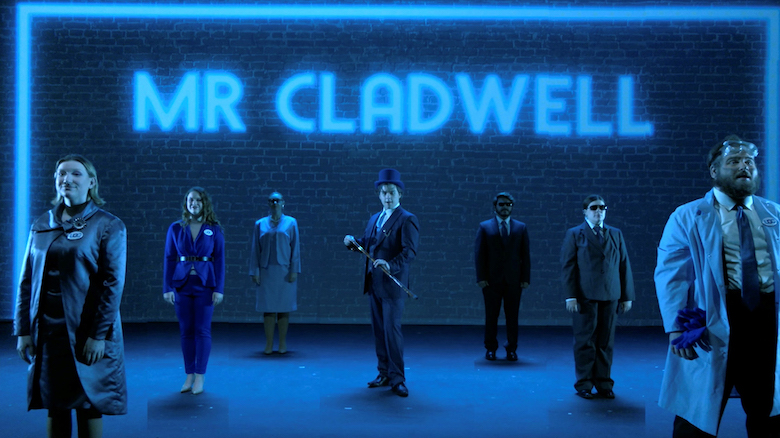 The University of Mississippi Department of Theatre and Film‘s innovative 2020-21 season continues with another opportunity for students to create and present theater in a way they have never done before.

“Urinetown: The Musical” will be available to stream on-demand from 8 a.m. Friday (April 9) through 11:45 p.m. Sunday (April 11). Tickets are $10 per device, and once viewing begins, the rental lasts for 48 hours, or until the availability period ends Sunday evening. Tickets are available at this link.

The musical, a rollicking satire focusing on themes of climate change, corporate greed and political corruption, is about a fictional city in the not-so-distant future where the problem of a devastating water shortage is solved by corporate meanies UGC, who control the water supply by eliminating private bathrooms and forcing residents to pay for public amenities. Those who violate the rules are spirited away to an ominous place called “Urinetown.” 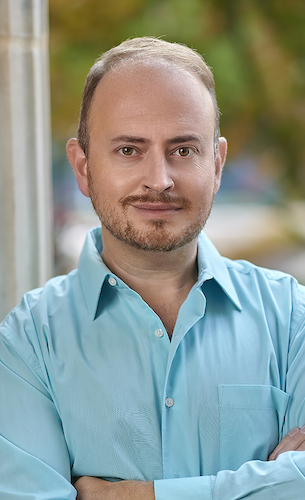 Micah-Shane Brewer, UM assistant professor of musical theatre, is the director. He first saw the show when it debuted 20 years ago and was taken with it immediately.

“I laughed so hard – I hurt after I left the theater from laughing so hard,” Brewer said. “I wanted to go back and see it the next night, and when it transferred to Broadway a few months later, I went back and saw it two more times.”

Much of the show’s fun, Brewer said, comes from the show’s self-referential nature and its not-always-subtle sendup of the whole genre of musical theater.

“The creators of the show are pure genius, because they knew exactly what they were referencing when they were writing these songs,” he said. “If you know musical theater, you’ll hear moments that remind you of shows like ‘West Side Story,’ ‘Les Miserables’ and “Chicago.’”

But Brewer noted that beneath the humor and song, the authors were influenced by Bertolt Brecht, whose “Epic Theatre” movement sought to jolt audiences out of an escapist way of consuming art.

“One of my favorite quotes of Bertolt Brecht is, ‘Art is not a mirror with which to reflect reality, but a hammer with which to shape it,’” Brewer said “And I think that’s what ‘Urinetown’ does very well: It shows us what’s going on, and it asks us what we are going to do as a society to effect change.”

Brewer has directed the show once before, some 15 years ago, but this time will be markedly different. It has been rehearsed, performed and filmed using elaborate safety protocols during a time when it would otherwise be unsafe to have a 17-member cast singing together onstage.

It will stream to at-home audiences who cannot safely gather in theaters. 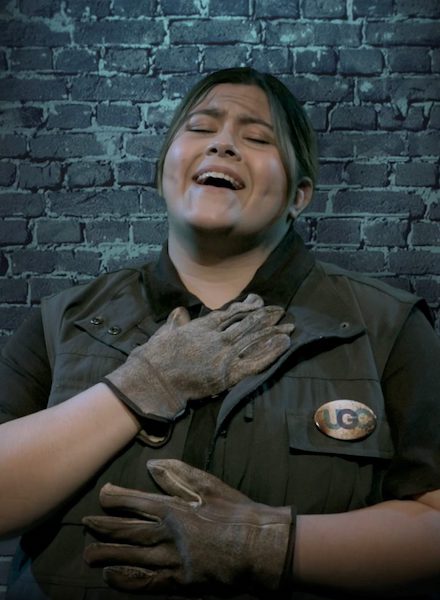 UM senior Gabriela Nieto-Hale portrays Penelope Pennywise, the warden of Public Amenity #9, in ‘Urinetown,’ the final production of the spring from the Department of Theatre and Film. Submitted photo

Senior Gabriela Nieto-Hale, from Belmont, plays Penelope Pennywise, warden of the public amenity where much of the show’s action takes place, whom she describes as “no nonsense, but also very romantic, secretly. She’s multifaceted and very, very funny.”

Nieto-Hale said she has enjoyed playing Pennywise, to whom she relates on many levels, as she has to other characters she’s played in department productions, including Marmee in 2019’s “Little Women,” and Lisa in 2020’s “A New Brain,” which was cancelled due to the pandemic.

“There’s something very determined” about the characters she plays, she said. “I feel like I always play headstrong characters … very bold and brash.”

For inspiration, Nieto-Hale, who has been singing since age 4, looked to legendary stage divas.

“Musical theater divas very much influence my performances, and I would say that this definitely ties in with Penny, especially because of the dramatic atmosphere of the show,” Nieto-Hale said. “Everything is very heightened and soap opera-like, so I think of Bernadette Peters or Barbra Streisand and a very heightened, diva-ish way of presenting a performance.”

Even channeling the likes of Streisand and Peters, the production’s unusual rehearsal and filming schedule presented challenges. Actors filmed scenes individually so that they could perform alone and without masks; recorded scenes will be edited together into a complete film of the production.

“The other day, I had a big solo number at the beginning of the show, and I think I sang it three times while we were filming,” Nieto-Hale said. “It wasn’t so much physically or emotionally draining, but thinking about having to keep the performance level for every single take.” 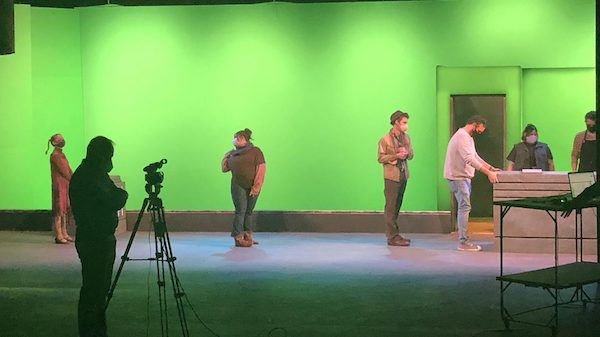 Cast members for the production of ‘Urinetown’ rehearse before a green screen in Meek Hall Auditorium. Submitted photo

Lawson Marchetti, a senior English major from Jackson who is minoring in music and theatre arts, portrays Caldwell B. Cladwell, owner of UGC, the company that controls the public amenities – and the water.

“For all intents and purposes, in terms of the story, he’s the villain,” Marchetti said. “But he’s also trying to find solutions, so I think that’s the way to connect with him … seeing where he started, with trying to think of a way to keep people alive and keep the water from drying all the way up.”

Marchetti, who, like Nieto-Hale, gravitates naturally to musicals and singing roles, said he hadn’t yet had an opportunity to play this kind of villain – and he kind of liked it.

“I grew up loving Disney villains, so it’s really fun that I get to play the villain,” he explained. “There’s something really exciting about being the guy who’s on top. … And doing that whole song-and-dance, typical musical theater/movie-type moment where everyone’s like, ‘Oooh, Mr. Cladwell.’ It’s just fun.”

Echoing professor Brewer, Marchetti noted that the song-and-dance numbers are what he enjoys most about the show, which he was not familiar with before becoming involved this semester.

“I like how outrageously ridiculous and funny it is,” Marchetti said. “All these little moments of breaking the fourth wall, the over-the-top exaggeration of all these different musical theater styles, the political archetypes … it’s all just too much fun.” 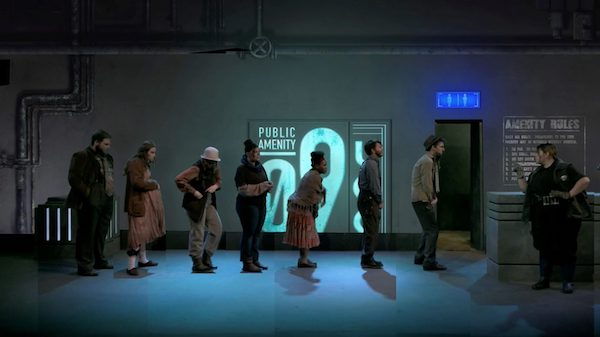 Members of the ensemble cast for the Department of Theatre and Film’s production of ‘Urinetown’ were filmed individually in Meek Hall Auditorium and digitally edited into a set constructed in Fulton Chapel. Submitted photo

He explained that the rehearsal and filming process has been very different from what he is accustomed to. Rehearsals were done socially distanced and masked, but Brewer feeds lines to the individual actors for filming.

This meant not having castmates to play off during performances, and also sometimes filming out of sequence.

“We rehearsed and learned all the music and recorded it, so now we basically have a cast album,” Marchetti said. “We’ve been practicing singing for intros and the way we did phrases on the tracks, because we’ll have to sync up with the filming.

“It’s really different, especially for a lot of people who are thus far accustomed to acting on the stage and having everything be of the moment, happening all at once, and suddenly things are not happening chronologically according to the script.” 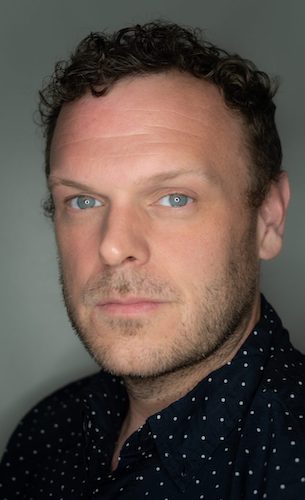 Cody Stockstill, assistant professor of scenic design, created both physical and digital locations for the production of ‘Urinetown.’ Submitted photo

Cody Stockstill, assistant professor of scenic design and the show’s scenic designer, has created both physical and digital locations for the production: a set constructed in Fulton Chapel and a series of digital backgrounds and projections that will be used in scenes filmed in front of a green screen in Meek Hall Auditorium.

“What the green screen allows us to do is film each person separately and then digitally insert then into large group scenes,” Stockstill said. “We’re trying to let these actors interact in the final product without interacting during the recording.”

The production team had learned of theaters creating this kind of filmed performance, but “we don’t think a lot of colleges are going to the breadth that we are to accomplish this particular production,” Stockstill said.

All told, more than 20 set pieces, a mix of physical – or “practical,” as Stockstill calls them – and digital sets, along with digital projections, together will convey the numerous locations of this sprawling show.

“Practically speaking, we’re trying to do something that a lot of us have never done before.”