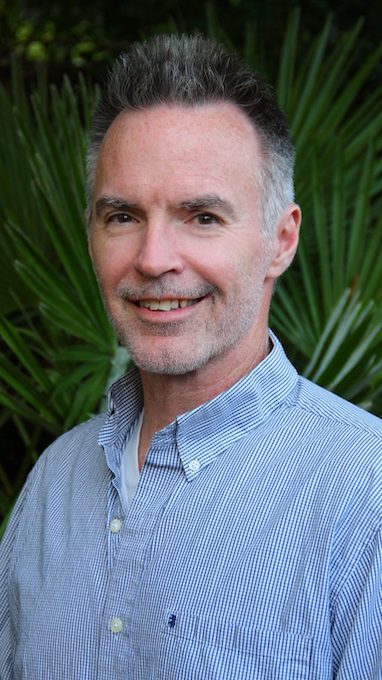 Jos Milton keeps a full schedule at the University of Mississippi Department of Music, including teaching classes and voice and giving private lessons, all while maintaining his own performance schedule as an acclaimed tenor.

It’s that last one that recently got the associate professor of music nominated for a Grammy Award. One of his favorite creative enterprises is singing with Conspirare, an Austin, Texas-based professional choral ensemble that just garnered its latest Grammy nomination.

“The composer tapped into these lofty, profound texts,” he said. “John Muir focuses on the vastness and beauty of nature, for example, but Runestad also doesn’t shy away from text that deals with serious issues, and that gives a rawness to the work and makes it thought-provoking.

“For being so young, he’s also prolific, and he has a background in choral music, so he resonates with writing for choir.”

Interestingly, Runestad was present at the rehearsals and collaborated with the ensemble throughout the project, Milton said.

“At the point of recording, the music is in the hands of the choir and artistic director Craig Hella Johnson, but Craig wanted to be sure that the music reflected the composer’s intentions,” he said. “Runestad is a big fan of Conspirare, and said it meant a lot to him that we did an entire album of his works.”

Although Runestad’s compositions are lengthy, he is comfortable writing in the choral medium, Milton said.

“That means, for example, picking the right moment to bring to bring forward dense textures and then thinning it out by letting voices come into unison, giving the singers time to breathe, creating contour for each voice, making it comfortable for the singers as they move throughout their range,” he explained.

Milton first connected with Conspirare’s artistic director when he was living in Austin in the early 2000s. He began singing with the group in 2009.

“Jos has been a leading member of Conspirare, a cherished member of this musical family,” Johnson said. “His talents are an integral part of the ensemble’s artistry and sound. We celebrate this recognition of his many gifts.”

Singing with Conspirare continues to be a rewarding experience, Milton said.

“This is ensemble singing at a very high level, and it’s a viscerally moving experience every time I work with them,” he said. “It helps reaffirm my pursuits as an artist, because it feeds my artistic self. I work hard to stay active with them – it’s a challenge balancing it with my work here, but it’s a high level of artistry, so it’s worth it.

“The artistic director, especially, performs at a brilliant level of artistry. He’s also a composer. He doesn’t prescribe a specific way to sing, but trusts us as singers to reach into our tool kits and create the sound he’s looking for.”

Each Conspirare project is different, but logistically, they follow a similar pattern, Milton said.

“We get the music ahead of time, then we meet in Austin for three to four days of intense rehearsal and a series of public performances, then we record the music,” he explained. “It’s an immersive experience, and it makes the musicians close – like a family.”

The length of time that the group’s members have worked together is a creative asset, Milton said.

“We’ve have done many projects together, so we don’t have to take time to find a unified sound. We go straight there, now, which is a big help when we have limited time and a difficult project.”

One energizing element of Conspirare’s work is that “it’s something unique every time,” he said. “Each project turns over another rock to try something unusual and new. Craig Hella Johnson is in relationship with lots of composers, and is a champion for new music, but we also do the masterworks.”

“This choral organization is the leading professional choir in the United States,” he said, citing the group’s slew of Grammy nominations and win. “Due to Dr. Milton’s association, we were able to bring Craig Hella Johnson and Conspirare to Ole Miss in 2018 for a performance of ‘Considering Matthew Shepherd,’ which also involved our own University Chorus.”

“Considering Matthew Shepherd” was nominated for a Grammy, and Conspirare performed it in Oxford as part of a national tour. Ole Miss music students scattered throughout the Ford Center stood and joined the singing, and it is a performance that students and community members still discuss.

“Dr. Milton’s singing with Conspirare connects Ole Miss to the professional choral world, which is not only exciting, but quite educational for the choral students here,” Trott said. “We all applaud and value highly his work with Conspirare.”

Since “The Hope of Loving,” Conspirare has recorded another album, titled “The Singing Guitar.”

“It conjures the feel of the vast Western landscape,” Milton said. The standout piece on that recording, “How Little You Are,” is a piece by Nico Muhly for singers and three classical guitar quartets, based on texts from 19th century pioneer women in Wyoming and Texas.

“The album takes elements of folk and cowboy songs and folds them into contemporary classical techniques,” he said. “Classical guitar creates a unique texture, and it was a challenge to work the voices into relationship with the guitars’ sound, but it was tremendous to work with the LA Guitar Quartet – which is especially well-known – as well as quartets from Austin and Dallas.”

This is Conspirare’s ninth Grammy nomination and would be its second win. The 62nd Grammy Awards ceremony is set for Jan. 26, 2020.