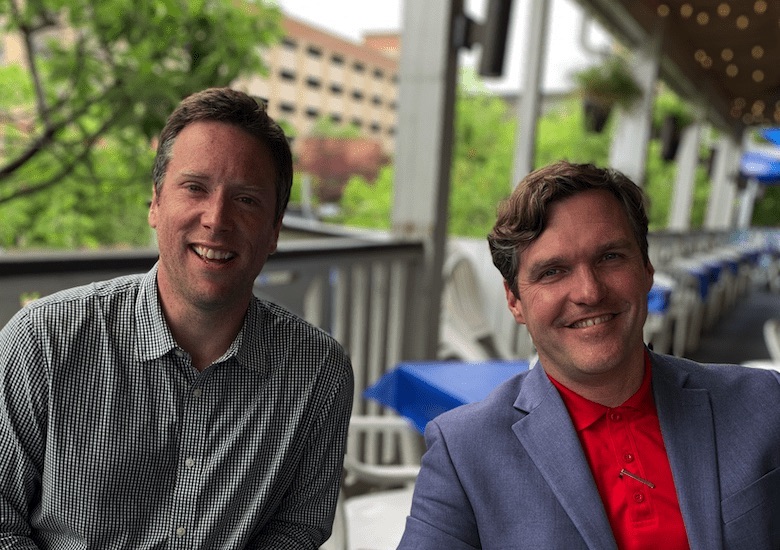 Hunter Taylor and Ryan Miller became friends over their shared love of music. Their new podcast, Same Side of the Tracks, invites prominent UM figures to explore their lives through the lens of shared musical experiences. Submitted photo

Hunter Taylor and Ryan Miller built a friendship around shared musical memories and experiences – now they hope to do the same for others with their new podcast.

Episodes of the podcast, which is called “Same Side of the Tracks,” feature conversations with guests centered around the music that has played a significant role in their lives.

Taylor, clinical assistant professor of teacher education at the University of Mississippi, and Miller (BA international studies 02, JD 08), executive director of the Mississippi Office of Workforce Development, created the show because they became close by talking about ’80s country music – especially their love of George Strait.

“Ryan and I have a lot in common as family men and professionals, but we really love talking tunes,” Taylor said. “Music is one of the things that tends to unite people faster than anything else. We are using music like a Trojan horse in an effort to bring people from different backgrounds together.”

“We start each interview by talking about how music has impacted the guest through the years and that often leads to significant life events,” said Miller, former associate director for external operations at UM’s Haley Barbour Center for Manufacturing Excellence. “Then we can ask about the songs and artists that resonated in those moments.”

Cole talks about his siblings’ fighting for control of the boombox, Wilkie talks about listening to the Dire Straits while covering the Lebanese Civil War, Tannehill talks about the early days of Oxford’s Double Decker Arts (and Music) Festival, and McPhee-McCuin reflects on the music she listened to growing up in the Bahamas.

“These are people in our community who live inspired lives,” Taylor said. “And every time we left an interview, we would innately text each other something like, ‘Wow, that was incredible.’”

The first episode, which features Cole, is available now. Subscribe through a preferred podcast app or on the Same Side of the Tracks website.