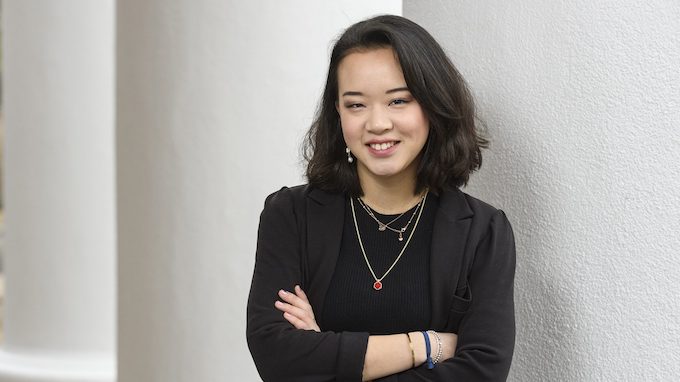 Born in Daejeon, South Korea, University of Mississippi student Jiwon Lee spent part of her childhood and teenage years in Oxford, so Ole Miss is a second home to her. Photo by Thomas Graning/Ole Miss Digital Imaging Services

Jiwon Lee is not your typical international student at the University of Mississippi.

Born in Daejeon, South Korea, Lee arrived in Oxford as an infant. Her father, Jongbok Lee, and mother, Aeran Moon Lee, were attending UM in the late ’90s, so the family moved to Oxford.

Jiwon Lee learned to speak English – before learning Korean – in Oxford, and she also fell in love with the university. With both parents on campus, their toddler daughter spent many hours there, too, either following them around, being read children’s books from the J.D. Williams Library or attending football and basketball games.

When her father earned his doctorate in curriculum and instruction in 2000, the family moved back to South Korea, where Jiwon Lee spent kindergarten through seventh grade. Then the family returned to Oxford when her parents became visiting scholars at UM.

“I think of myself as a bridge of an actual domestic American student and international student because I have experiences of both,” said Jiwon Lee, who graduated from the university in May 2018 with a bachelor’s degree in music performance with an emphasis on flute and violin performance.

While an undergraduate, Jiwon Lee was a drum major for the Pride of the South Marching Band, principal flutist of the UM Wind Ensemble, ensemble violinist for the LOU Symphony and a featured soloist playing the national anthem at various Ole Miss sporting events. A member of Phi Kappa Phi honor society, Lee also was president of the Korean Student Association and recipient of the Marcus Guinn Spirit Award.

In April 2018, Lee was inducted into the university’s Hall of Fame, one of the highest honors afforded an Ole Miss student.

David Willson, UM director of bands, first met Jiwon Lee when she was in the band at Oxford High School. That first meeting has led to a 10-year professional mentorship.

“Jiwon was very fortunate to have a world-class artist as her mom,” he said. “Regardless, Jiwon was immersed into music very young and that was her form of playtime. Practice was her recreation. Being exposed to music so early allowed her brain to be wired with the musical processes in such a way that much of what she does is much like walking and any other natural acts that nature gives us.

“With the natural foundation, she has continued to work and polish what she does to a much more professional level. … Despite this talent, she is a normal student with all the study and time demands of a music student.

“Jiwon has a great sense of humor and this trait also helps her with her performance composure. She has brought much energy to our program and has been an inspiration to me and many others.”

Jiwon Lee is pursuing a master’s in music education with an emphasis in violin performance with a tentative graduation date of May 2020. Her end goal is to become a professor at a university teaching either flute or violin, or maybe music education courses.

“(Teaching) is kind of our family business,” she said. “It’s what I grew up watching. I grew up at a university.”

She’s deciding her path forward now, and she’s also interested in maybe earning a doctorate in instrumental conducting. Or, she might teach for a while before entering a doctoratal program. Best to call her unsure, she said.

Still, whatever her next step after she earns her master’s degree, Jiwon Lee said, “Ole Miss has prepped me for what I want to be.”

She grew up an Ole Miss fan – of the school and its sports teams – and has long been surrounded by what she calls “the Ole Miss family,” which is a big reason why she attended UM.

“Ole Miss has definitely helped me grow into a better student and better person because interacting with these wonderful, amazing people has prepared me to deal with certain things: how to study, how to extend my knowledge,” she said. “And it will for the rest of my life.”

This appreciation of UM is echoed by Jongbok Lee, who is a professor in the College of Education at Mokwon University in Daejeon and president of the university’s faculty council.

“When I visited Ole Miss in 1996 … it gave me great inspiration,” he said. “The campus was so beautiful, and people are very kind and gave a warm welcome. Also, I found that Ole Miss is one of the most excellent universities in America.”

When her busy schedule allows, Jiwon Lee assists in the Office of Global Engagement, helping other international students discover their home at Ole Miss. She also has a graduate assistantship with the Ole Miss band.

Her mother lives in Oxford but is preparing to move back to South Korea and rejoin her husband. Jiwon Lee doesn’t return to South Korea very often, previously visiting last summer for the first time since graduating high school. With both parents being there, she’s hoping to visit more often.

She’s just not ready to leave her campus home yet.

“I love this school too much,” she said. “The people are nice with this Southern hospitality. The campus is beautiful. There’s something exciting about being here.

“Ole Miss is such a wonderful environment.”