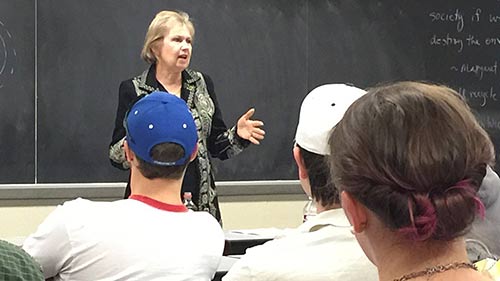 A veteran scientist who helped the National Aeronautics and Space Administration (NASA) achieve one of the crowning achievements of the 20th century visited the University of Mississippi recently to challenge students to face life’s problems by first checking their assumptions.

Howard recalled sitting behind James Meredith in one of her classes, then talked about one of her first jobs, which involved developing programs to guide a spaceship through the Earth and moon’s orbits for the first lunar landing. She also talked about some of her current projects, which include writing a novel.

Howard’s visit offered students a different perspective on subjects related to mathematics and suggested that students should branch out of their subjects and learn as much as possible for the value that knowledge will have in their long-term careers.

The lecture provided an incredible opportunity for students to speak with a veteran scientist, said James Reid, professor and interim chair of mathematics.

“Howard reminds me a lot of our students because she is very industrious,” Reid said. “This is one of the most exciting speakers our undergraduates will have an opportunity to hear.”

Howard has worn many hats throughout her career. She worked on design trajectory for the Apollo lunar missions, programmed data management programs for oil and gas companies, wrote control language for data management systems, and organized and implemented successful political campaigns for 18 years.

Howard has taught junior high and high school, operated her own real estate company in Sugar Land, Texas, and helped found Living Water International, an organization that helps provide clean water in 26 countries. She assisted with typhoon relief in countries affected by a 2013 typhoon.