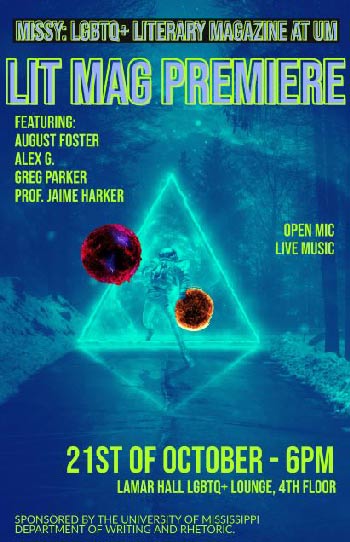 Like clues in a scavenger hunt, stickers with nothing more than the word “Missy” and a QR code are making their way around campus to promote and distribute the first issue of the University of Mississippi‘s latest student-led publication.

Anyone who scans the QR code on their phone, or follows this link, will be taken to an online flipbook collecting poems, photographs and illustrations from LGBTQ+ and allied members of the UM community.

To celebrate the release of the first issue, the editorial staff is hosting a launch party in Lamar Hall’s LGBTQ+ Lounge at 6 p.m. Thursday (Oct. 21), featuring live music, an open mic and featured readings from magazine contributors.

Greg Parker first thought about creating a magazine during the Transitioning to College Writing symposium in 2019. The idea for Missy took root in Parker’s during a breakout session focused on using zines and community writing for writing instruction and community building. At the time, Parker was president of the UM Pride Network and was interested in project the group could undertake.

“As an English major, I always have writing on my mind,” said Parker, who graduated with a bachelor’s degree in secondary English education in 2020. “I’m not going to say I’m a great writer, but I like to do it.”

Parker said he wasn’t focused on some big idea or larger aspiration, but simply wanted a place for LGBTQ+ students on campus to be published.

He shared the idea with others in the LGBTQ+ community and was eventually introduced to Tyler Gillespie, an instructor in writing and rhetoric who spent years working and writing for zines and small community publications in Chicago.

“I was doing that because I needed an outlet and I needed community in 2010,” Gillespie said. “I didn’t think that 10 years ago would actually be something that would help me in this moment to help students. I think the work I’ve done with them has influenced my work.”

Gillespie is writing and researching a book about community writing and its influence on LGBTQ+ communities in Florida.

With the addition of associate editors Grace Marion and Michael Martella, the idea began to take shape. The group came up with the name Missy, a queer rhetorical play on Ole Miss, and began taking submissions. They hosted a writing workshop, which focused on poems from LGBTQ+ authors around specific themes.

Parker said the project immediately began to enrich the relationships of everyone involved.

“I had known most of the people working on Missy for a while,” Parker said. “And none of us had ever talked about writing. Then, suddenly, we’re doing workshops and sharing poetry with each other and reading submissions where before we were just hanging out – playing video games or getting something to eat.” 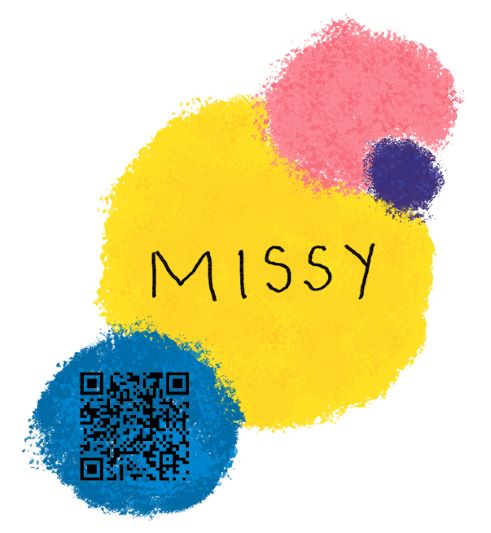 Colorful stickers with the word ‘Missy’ and a QR code have been popping up around campus to promote and distribute the first issue of the University of Mississippi’s latest student-led publication.

“I was an undergrad from 2012 to 2016, and there were a few visible outlets that were open for queer students, but not many,” said Martella, a 2021 creative writing MFA graduate from Brandon. “I think it’s important to have that space for students to develop among an accepting and loving group of people – especially when it comes to something as tender as expressing themselves through art.”

Marion, a senior journalism major from Levittown, Pennsylvania, said she also hopes the magazine serves as a way to let other LGBTQ students that they aren’t alone.

“Many people are uncomfortable being gay in Oxford, Mississippi,” Marion said. “I know people are afraid to live here out and as themselves, so it’s important to have representation in the community to let everyone know they’re not alone. There are plenty of people just like them.”

Marion hopes the launch party is an extension of the magazine’s mission and a way to get more people involved in subsequent issues.

Thursday’s launch party will feature readings from Parker, Martella, August Foster, Alex G and Jaime Harker, director of the Sarah Isom Center for Women and Gender Studies, as well as live music and an open mic for anyone in attendance who would like to read or share.

Missy is taking submissions for the next issue. Anyone interested can submit their work for consideration to missysubmissions@gmail.com.

Missy is sponsored by the UM Department of Writing and Rhetoric, Sarah Isom Center and Division of Diversity and Community Engagement