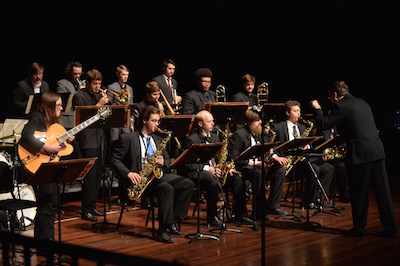 The Mississippians Jazz Ensemble just returned from a tour through Illinois and Indiana where the group performed at the Notre Dame Collegiate Jazz Festival on Feb. 27, 2016.

Held annually since 1959, The Notre Dame Collegiate Jazz Festival is the oldest and most prestigious festival of its kind. The festival has a rich history of bringing world-renowned artists to judge and clinic selected jazz ensembles from across the country.

The band performed in a prime slot on Saturday night and received an enthusiastic standing ovation from the audience and judges.

The band was awarded First Division ratings by all five judges, and two soloists, Alicia Venchuk on guitar and Hunter McGuary on trombone, were awarded certificates for outstanding performance.

Other highlights from the tour included performance rehearsals at Illinois State University, Elkhart Central High School (IN) and tours of the Bach and Selmer musical instrument factories in Elkhart.

The Mississippians Jazz Ensemble is an 18-piece big band under the direction of Michael Worthy, associate professor of music. Members of the band are University of Mississippi undergraduate and graduate students majoring in music and other academic disciplines. Students enroll for academic credit and meet for three fifty-minute rehearsals per week on MWF at 12:00. The band performs on campus several times throughout the year. Recent guest artists and clinicians include Jeff Coffin & The Mu’tet, Roy “Futureman” Wooten, Mark Taylor, Jim Snidero, Marcus Printup, Elliot Mason, and Ali Jackson.

To learn more about the Mississippians Jazz Ensemble at the University of Mississippi, visit http://jazz.olemiss.edu.