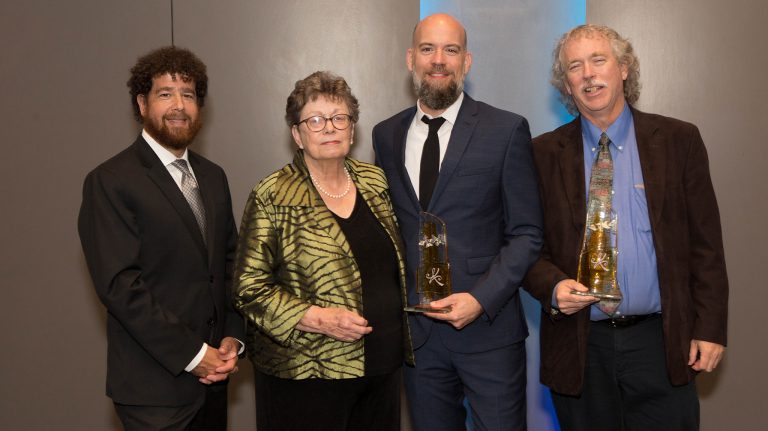 Jimmy Thomas, Ann J. Abadie, Odie Lindsey, and Ted Ownby accept the Special Achievement Award on behalf of the UM Center for the Study of Southern Culture at the MIAL banquet. Photo courtesy of Brian Hull

The University of Mississippi Center for the Study of Southern Culture garnered two awards at this year’s Mississippi Institute of Arts and Letters awards banquet, held June 2 at Two Mississippi Museums in Jackson.

Also receiving an award was John T. Edge, director of the center’s Southern Foodways Alliance. Edge is the winner of MIAL’s nonfiction award for his recent book, “The Potlikker Papers: A Food History of the Modern South.” 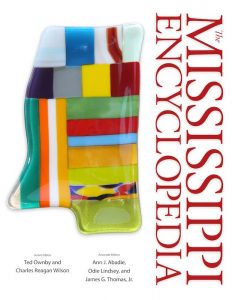 The Mississippi Encyclopedia, a 9-pound reference book, features 1,500 essays by nearly 700 authors on all things Mississippi, from academics and agriculture to Zig Ziglar. It is the product of more than a decade of work at the center.

“We are particularly pleased to get an award from MIAL both because it suggests the encyclopedia did a good job with creativity—coverage of art, architecture, poetry, fiction, nonfiction, drama, foodways and other topics— and also because we got to spend time with creative people on the night of the banquet,” said Ted Ownby, the center’s director and senior editor of the Mississippi Encyclopedia. “We appreciate any award, but this one is especially gratifying.”

MIAL, begun in 1978, supports, nurtures and recognizes Mississippi’s artists, including fiction and nonfiction authors, visual artists, musical composers, photographers and poets. Each year, the institute honors creative individuals with an award in their specific field.

The prestigious awards, first made in 1980, are presented in seven categories, and the institute’s juried competition is unique in the state.

Nancy Davidson LaForge, president of MIAL, said she was delighted with the winners and honored to have been able to recognize them this year. The Special Achievement Award has been given only five times in MIAL’s 39-year history, so it has particular significance.

“It is an award initiated by the board of governors of MIAL and may be presented to an individual or group for a significant and unique literary, artistic or other creative accomplishment,” LaForge said. “The board of governors recognizes the depth of achievement in this volume and that it is thorough in its details of our history and culture.

“The entries, from the everyday to the extraordinary, tell the complex story of the state of Mississippi, her places and her people.”

For the second time in four years, MIAL honored the center for its work in publishing, and Ownby said he is pleased that the award recognizes the shared efforts of a large group of people.

“It’s an award for all the authors and editors because they were all part of a collaborative process, so we accept with all of the contributors in mind,” Ownby said. “So many people contributed to the book that it’s nice to win an award that recognizes all of their hard work.

“The online version also comes out this month so it was good to share with an audience who cares about Mississippi.”

Edge has written or edited more than a dozen books, including the Foodways volume of The New Encyclopedia of Southern Culture.

In the “Potlikker Papers,” he traces 60 years of how the food of working-class Southerners became a pivotal part of American cuisine. The book has been roundly praised by major news outlets and made National Public Radio’s list of 2017’s Great Reads.

An Atlanta Journal-Constitution review asks, “Is the ‘Potlikker Papers’ a history of the South by way of food stories, or a story about Southern food by way of our history? By the time you come to the end of this rigorous volume, you’ll know that the two are indivisible.”

“Edge manages to combine an appreciation of food as a measure of class and race in the post-World War II American South with a real zest for the comestibles themselves,” said Harold Selesky, this year’s nonfiction judge.

The award recipients, chosen by out-of-state jurors prominent in their respective fields, were all honored at the recent awards banquet.

Other award winners with UM connections include the fiction award for “Eveningland” to Michael Knight, who was the 2005-06 John and Renee Grisham Writer in Residence; and the poetry award for “The Virginia State Colony for Epileptics and Feebleminded: Poems” to UM MFA graduate Molly McCully Brown.

For more information, visit the MIAL website at http://ms-arts-letters.org.