Read an excerpt from Mississippi, an ongoing collaborative project of poems by Ann Fisher-Wirth, professor of English and director of environmental studies, and photographs by alumna Maude Schuyler Clay on Bloom literary website>>

More of Mississippi: A Collaborative Project in About Place Journal, published by the Black Earth Institute >> 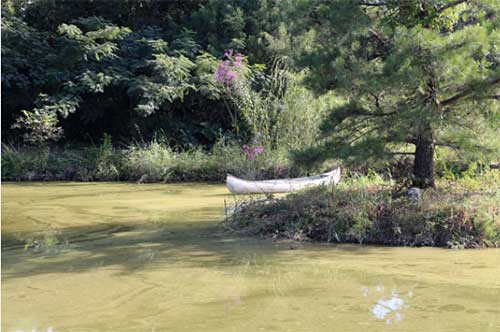 Bloom: Can you talk about your collaboration with Maude Schuyler Clay? How does it work? Are you responding to photographs she’s already taken? How has this work been received so far? What have you learned from others as this project unfolds?

Ann Fisher-Wirth: Thanks for asking about this new project, Mississippi. I have known Maude Schuyler Clay for many years, though not well; though she doesn’t live in Oxford, she has deep ties with the literary and arts community here and we have mutual close friends. I chose one of her photographs to be the cover of my fourth book of poems, Dream Cabinet. She mentioned in passing that sometime she’d like to “do something together,” and eventually I was able to take her up on the idea. She began sending me .pdf’s, choosing among the thousands and thousands of photographs she has taken, and I began writing poems in response to them—not all of them, by any means. With one exception, the photographs are not of people, but rather of swamps, fields, trees, derelict buildings, weather, dogs—but they evoke Mississippi so powerfully that I would begin to hear voices speaking their lives through these images. It’s a matter of listening, waiting. These poems are all about voice.

Bits of my own experience coalesce in creating these speakers who are not me. For instance, the poem “Had me a dog once”…. In 1995 we found the starving puppy, who became our dog GrizzLee, abandoned in a forest, and the vet told us that he had probably been turned out to die because he didn’t look like he would be a good hunting dog. That’s the story I created for the dog in my poem. Then, I’ve noticed that men around where I live, including my two grown sons, often punctuate their conversation with “You know what I mean?” So that made its way into the poem too—though my sons would never abandon a dog. I like the horrifying irony of that last iteration of “You know what I mean?” when, I hope, the reader most certainly does not.

I’ve been submitting these poems for publication, with a lot of success. I have given readings from Mississippi, accompanied by a PowerPoint of the images, at various universities in the United States and also in Taiwan at a conference on material ecocriticism last December; and I’ll travel to Cambridge University, to the ASLE/UK conference, to do another presentation. It is very exciting, the enthusiasm with which the project has been met. The voices in these poems are not often heard outside the South, and they are voices that, like the land, are being lost with the development and modernization that characterize the New South. Yet they express emotions and concerns we all share, and wherever I’ve taken this project, people are responding to it.