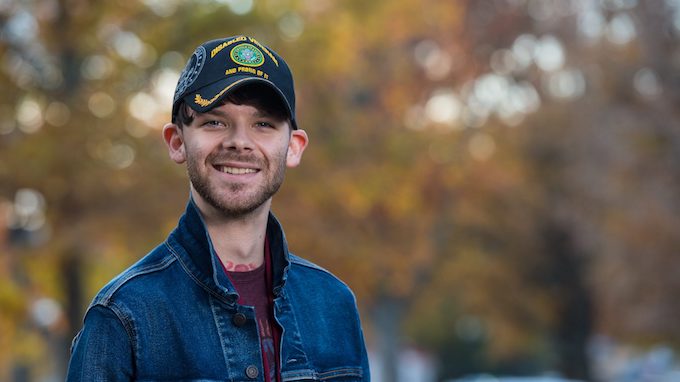 Nicholas Roylance is a theatre arts major at the University of Mississippi, a disabled military veteran and a member of Walkers for Warriors, a nonprofit organization that raises money for military veteran students at Ole Miss. Photo by Kevin Bain/Ole Miss Digital Imaging Services

Four years ago, University of Mississippi student Nicholas Roylance was injured in training exercises during his time as an active duty member of the United States Army. That accident during drills left Roylance wounded, angry and searching for his path in life.

Roylance eventually found his place at Ole Miss, pursuing a career in acting while using his talents, in partnership with a start-up nonprofit, to help raise money for veterans like himself.

“I signed up for the military because I wanted to do my part for the country, but I also wanted to live after that,” Roylance said. “I found my (outlet) in my art: acting. I want to change the stigma surrounding veterans, that they can be seen as humans and seen as artists.”

Fans of the AMC series “Walking Dead” can paint a perfect mental image of Roylance by picturing the character Daryl Dixon.

Roylance is one of the “team leaders” of Walkers for Warriors, a nonprofit that raises money at “Walking Dead” cosplay conventions to help fund services that benefit veterans at the university. The Walker Stalker cosplay conventions are hosted in cities around the world to give fans opportunities to interact with cast members as well as costume experts, such as Roylance, who are adept at portraying characters from the acclaimed show.

Walkers for Warriors’ first major donation to the university was for last month’s Ole Miss Wish. The organization gave $7,500 to the family of Ole Miss Wish Kid Benjamin Clark to go to Disney World.

Roylance’s story does not include a trip overseas and a return home with medals signifying valor in combat.

“My service is very tragic,” he said. “I got hurt and a lot of people had to take over and deploy for me.”

Roylance’s consideration of soldiers and their lives after service led to his eventual involvement with Walkers for Warriors, an organization that allows him to give back to fellow veterans while taking advantage of his natural appearance and his acting ability.

But Roylance didn’t set out to be a cosplay star; instead, he wished to become a TV and film actor. That dream started when he was young, but it grew intense as an adult as he tried to find an outlet for his post-service frustrations.

“When I came out of the military, I was angry at everybody,” he said. “I had nothing to do and no one to yell at, and then acting and cosplay gave me a purpose.”

Roylance, who has appeared in a couple of movies, is majoring in theatre arts at Ole Miss. Acting created a natural outlet for Roylance to get into cosplay, he said.

“I love acting because I get to be somebody else,” Roylance said. “Cosplay was a cheap and easy way to start acting while putting smiles on people’s faces.

“As an actor, I want people to enjoy my work, but if you’re telling me I can just dress up in costume and make someone smile? Sign me up.”

It was at a “Walking Dead” cosplay convention in Atlanta in February 2018 where fate would have Roylance meet his future Walkers for Warriors partner Gene Russell.

Roylance, who portrays Daryl Dixon, and Russell, who is a spitting image of character Negan, had both wrapped up appearances as their respective characters when they happened to share a table and start talking. They began working together at conventions, and Russell told Roylance that he had created a nonprofit for wounded veterans, but it had never really gotten off the ground.

“The idea sat dormant, but when Nick and I first met, he explained that he was a disabled veteran,” said Russell, an insurance adjuster from Atlanta. “I said, ‘I have this nonprofit for disabled veterans; why don’t we start gearing (cosplay) for the benefit of veterans?’”

“The fact that we even found each other and said, ‘hello’ is remarkable,” Roylance said.

Roylance and Russell felt that veterans organizations around the country could do more to directly help those they serve.

The two began working with Mary Loveland, director of Walkers for Warriors, and daughter Grace Loveland, president. The nonprofit gives money it raises to veterans services, with the sole beneficiary being Ole Miss.

The group raises money through interaction with fans, who come to meet the celebrity look-a-likes, have photos taken and purchase prints and other merchandise.

The partnership between Walkers for Warriors and the university allows services to be provided to student veterans on the “ground floor,” said Andrew Newby, UM assistant director of veteran and military services.

“Walkers for Warriors does wonderful things that deliver tangible results immediately, as opposed to other larger groups that provide things for nameless, faceless veterans,” Newby said. “Walkers for Warriors benefits real veterans in our community, on our campus and in the Ole Miss family.”

The link between the nonprofit and Ole Miss was an obvious one, according to its founders.

“The partnership with the University of Mississippi seemed like a perfect fit,” Mary Loveland said. “Nicholas, being a student veteran, was clearly the impetus for the relationship and has continued to work diligently to develop and enhance the partnership.

“The SVA program at University of Mississippi is extraordinary and, in my opinion, should be emulated throughout the university level in this country.”

Eventually, Walkers for Warriors may expand its benefactors to other universities or organizations, but for now, its sights are set on even bigger impacts for Ole Miss, Roylance said.

“Right now, we are working on compiling thousands of dollars, because the next donation we want to be super-substantial,” Roylance said. “We want to give Andrew enough money to say, ‘Wow, I can do anything I need.’”

Newby said he already has plans in mind.

“We are hopeful that as we gain more space on campus in the future, we will be able to partner with Walkers for Warriors in outfitting a dedicated one-stop-shop for our military-connected students,” he said. “As we see growth in terms of veterans coming to campus, we will need more space and personnel to accommodate these wonderful students, and the partnership with Walkers for Warriors will make this vision a reality.”

For Roylance himself, the goal remains an acting career. He hopes to continue his studies at Ole Miss and eventually move back to his home state of California to pursue a serious film and television career.

Anyone interested in supporting Walkers for Warriors can visit https://www.walkersforwarriors.com/. There, guests can contact members of the nonprofit to find information on cosplay convention schedules or donate.