April 9, 2015  |  by Lana Ferguson
Courtesy of The Daily Mississippian 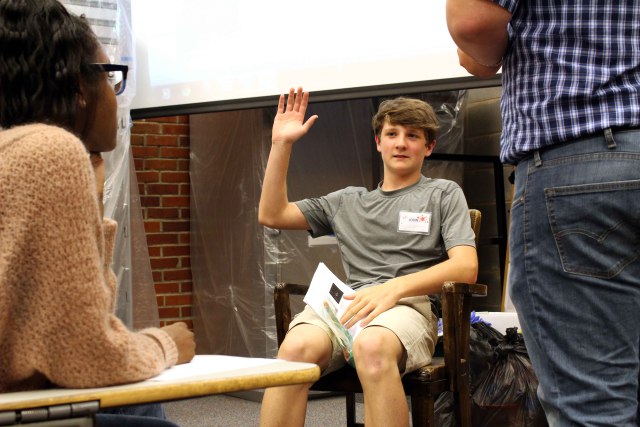 Brenteria Travis, a computer science Ph.D. student and Mississippi Grant Consortium fellow, coordinated the event. Her fellowship requires a K-12 outreach component, the reason for her involvement with the middle school.

“The teacher and kids enjoyed it so much, the teacher asked if I could put it together again as part of her 2015 unit. I agreed,” Travis said.

Travis worked with Murrell Godfrey, associate professor of chemistry and biochemistry and director of the forensic chemistry program. She said she remembered Godfrey hosting a workshop for students previously, so she reached out to him for help.

“Dr. Godfrey and his team of college students filled in the contents of each session, as forensic chemistry is not my area,” Travis said.

Eighth grader Anna Claire Franklin said she was excited to participate because she wants to work with toxicology when she grows up.

There were bullets at the crime scene which provided the students the opportunity to learn about ballistics, including details about different types of bullets and gunshots.

“I liked doing the ballistics lab and learning about the different gunshots,” Addy said. “We got to look at bullets and match them together to figure things out.”

After visiting the crime scene and analyzing the evidence, selected students were put on the witness stand in a mock trial.

Eighth grader Jesse Edge acted as a witness for the CSI unit. He helped collect some of the evidence and analyze it, then he testified on the stand.

“I liked being questioned because I like talking to people and indirectly communicating with people, like in the audience,” Edge said.

The students were engaged throughout the workshop and were eager when the presenters would ask for volunteers.

Travis said bringing the students to campus allows them to see what they can learn in the classroom or when getting a degree can be applied to real life, like aiding in crime scene investigations.

She is traveling to the middle school today to give a talk on cyber security and digital forensics to the students who participated in the workshop.