Micah Everett Takes the Trombone to the People 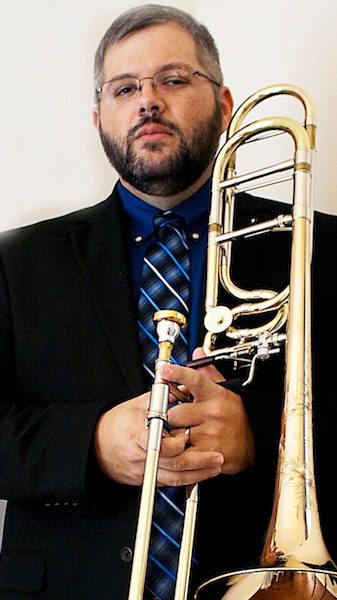 A University of Mississippi associate professor of music will demonstrate the surprising range and impact of tenor trombone in “I Was Like WOW: Music for Trombone Alone and with Multimedia,” set for Thursday (Sept. 6) evening in Nutt Auditorium.

The 7:30 p.m. program by Micah Everett features music that moves from quirky playfulness to emotional resonance.

The concert will be quite different than a typical wind instrument solo recital in which a soloist is accompanied by piano for “most or the entire program,” Everett said.

“Instead, I will be on stage by myself for the entirety of the hour, performing either unaccompanied or with multimedia of various kinds,” he said.

“I Was Like WOW,” the piece for which the evening’s program is named, “is much more serious than the title might seem to indicate” because it combines “the trombone sound and various vocal and electronic effects with video clips of interviews with Iraq war veterans,” he said. The piece marries music to content and technology in a way that elevates a cultural conversation.

On the other end of the emotional spectrum, “Doolallynastics: A Brief Torture for Solo Trombone” by British composer Brian Lynn is “challenging yet silly,” Everett said. The substantial technical difficulty for the performer delivers a whimsical listening experience for the audience, he said.

“Micah Everett, who has been a member of our faculty since 2012, is one of our most active performers,” said Robert Riggs, music department chair. “He has been extremely successful in recruiting and attracting students to his low brass studio.

“His upcoming trombone recital, with its multimedia components, promises to be a colorful, unusual and highly enjoyable event.”