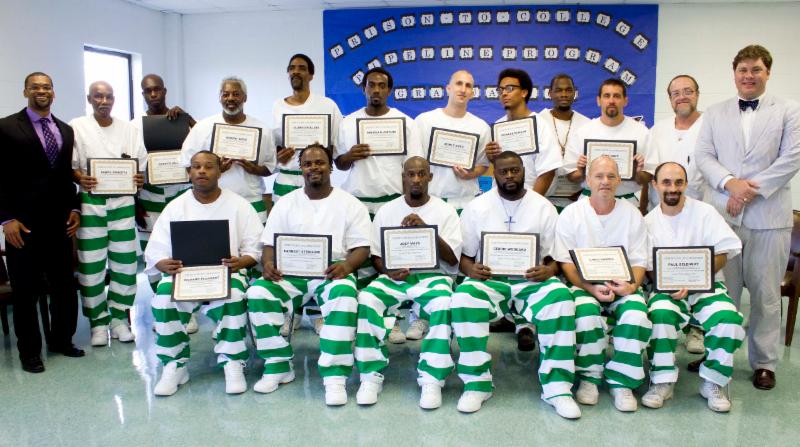 Patrick Alexander (far left) and Otis Pickett (far right) with the 2015 graduation class of the Prison-to-College Pipeline program at Parchman Prison.
Photo courtesy of the Mississippi Department of Corrections.

On a recent steamy June afternoon near Pearl, Mississippi, twenty-two women engaged in an animated discussion around Theda Perdue’s book Cherokee Women, an examination of the roles and responsibilities of Cherokee women during the eighteenth and nineteenth centuries. It was clear they had each read the text carefully before coming to class, and their analysis of Perdue’s study of the complexity of Native gender relations was as scholarly as one might find in any university classroom. But this was not a university classroom; the women are all inmates at the Central Mississippi Correctional Facility and the course is part of the Prison-to-College Pipeline Program administered by two professors, with financial support from the Mississippi Humanities Council.

The Prison-to-College Pipeline Program was conceived by Dr. Patrick Alexander, assistant professor of English and African American Studies at the University of Mississippi, and Dr. Otis Pickett (PhD history ’13) of Mississippi College. Pickett and Alexander’s vision was a college-level course for prisoners who held high school diplomas or GEDs that would be designed around the inmates’ interests. Prisoners who participate in the course have the opportunity to earn college credit, and perhaps more important, to prove to themselves they have the ability and the intelligence to pursue a college education after their release. The Prison-to-College Pipeline Program was launched at the Mississippi State Penitentiary at Parchman in June 2014 with a grant from the University of Mississippi College of Liberal Arts.

Inmates completed an initial survey, which gave them an opportunity to recommend topics they would be interested in studying. Based on their responses, Pickett and Alexander created a history and literature-based course they titled, “Justice Everywhere,” which focused on the Civil Rights Movement, race relations and the justice system.

After two successful summers at Parchman, Pickett and Alexander engaged Dr. Stephanie Rolph of Millsaps College to develop a similar program for women incarcerated at the Central Mississippi Correctional Facility.

“The class is teaching U.S. history through the lens of Southern women,” Pickett explains.

The women were given a list of several literary and historical works to build the course around, including Jubilee by Margaret Walker, Incidents in the Life of a Slave Girl by Harriet Jacobs and Kindred by Octavia Butler. As with the program at Parchman, the students were allowed to choose which texts they would study. The course includes reading, large- and small-group discussion and writing assignments, both in-class and out of class.

The Prison-to-College Pipeline course at the Central Mississippi Correctional Facility is the first for-credit college course offered in the history of that institution.

“This is historic!” says Dr. Pickett. “This means that in the history of incarceration in this state that these women will likely be the first to have the opportunity to receive college credit while being incarcerated.”

Response and participation in the program by the inmates has been gratifying, Pickett says. “It has been an absolute pleasure to teach (there) over the last few weeks…The women are really digging into the course and are loving it.”

One student penned a letter of thanks to the instructors soon after the course began. “I just wanted to write you to let you know how much it means to me personally and also how much I appreciate you for making this possible. I have been here 20 years and to get a college course like this…there are no words. From the bottom of my heart, thank you.”

Pickett says the caliber of scholarship displayed by these women is impressive. “They are students, they are scholars, they are teachers, and they are capable.”

Through its prison education initiative, the Mississippi Humanities Council supports the Prison-to-College Pipeline in addition to the “Mississippi Prison Writes” program.