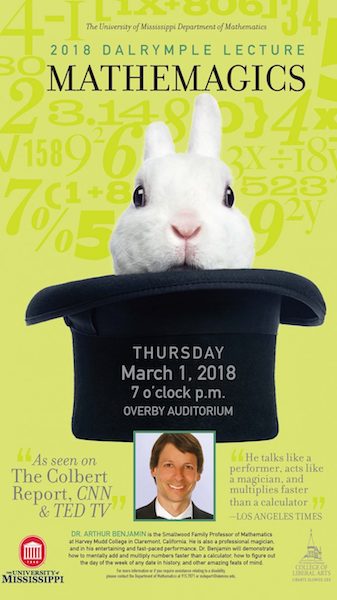 Mathematics and magic will mix Thursday (Mar. 1) at the University of Mississippi as a renowned professor demonstrates that the human brain is still faster than a calculator.

“Mathemagics” is the focus of the 23rd Dalrymple Lecture in Mathematics, set for 7 p.m. the Overby Center Auditorium. The presenter is Arthur Benjamin, Smallwood Family Professor of Mathematics at Harvey Mudd College in Claremont, California, and a professional magician.

The event is free and open to the public.

“In his entertaining and fast-paced performance, Dr. Benjamin will demonstrate how to mentally add and multiply numbers faster than a calculator, how to figure out the day of the week of any date in history, and other amazing feats of mind,” said James Reid, chair and professor of mathematics. “For the last 30 years, he has presented his mixture of math and magic all over the world to thousands of groups.”

A renowned mathematician, Benjamin has appeared on many television and radio programs, including NBC’s “Today” show, several CNN programs and “The Colbert Report” on Comedy Central. He has been profiled in The New York Times, Los Angeles Times, USA Today, Scientific American, Discover, Omni, Esquire, People Magazine and Reader’s Digest.

Benjamin has given three TED talks, which collectively have been viewed more than 15 million times.

“In their ‘Best of America’ issue, Reader’s Digest recently called him ‘America’s Best Math Whiz,’” Reid said. “The Los Angeles Times wrote, ‘He talks like a performer, acts like a magician and multiplies faster than a calculator.’”

Established to bring distinguished speakers to campus to discuss mathematics and mathematics research, the Dalrymple Lecture series was endowed by Mr. and Mrs. Arch Dalrymple II of Amory. Dalrymple attended Cornell University, Amherst College and UM, where he earned a bachelor’s degree in 1947.

For more information on the Department of Mathematics, go to http://math.olemiss.edu/.