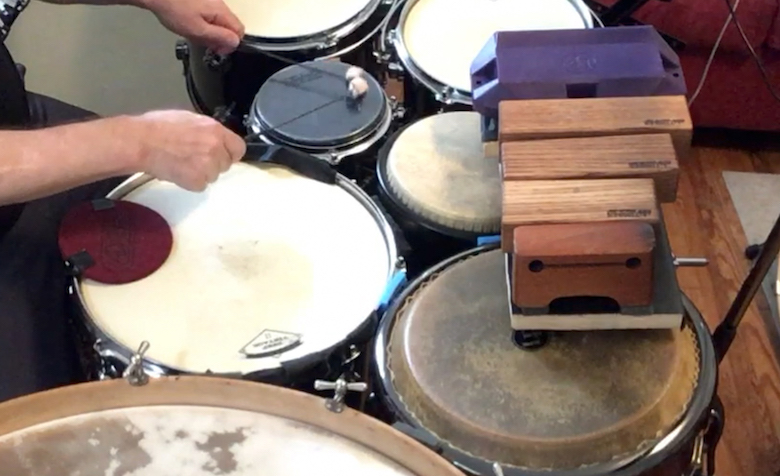 David Carlisle knows how to keep a lot of balls in the air.

Carlisle teaches and performs as an adjunct instructor in the University of Mississippi Department of Music. He is also principal percussionist with the Memphis Symphony Orchestra, which carries responsibilities far beyond performing, and he recently completed his Doctor of Musical Arts at the University of Cincinnati’s College-Conservatory of Music.

The deep exploration of musical forms he encountered while earning his degree reflects an enthusiasm for music that he shares with students.

The Teacher Becomes a Student

“I started the degree a while ago, then when I auditioned for the principal percussion position at the MSO, I had to put the degree on hold because the work at the orchestra was so intense. Then, we had our two children.”

During the last year, Carlisle returned to and completed work on his doctorate. The Doctor of Musical Arts is a terminal degree for musicians that emphasizes performance, while the Ph.D. emphasizes research.

Carlisle’s lecture recital focused on two works for solo percussion by 20th century Greek composer Iannis Xenakis. His research showed that most performers do not actually play all the notes Xenakis wrote for these complex pieces.

“His works for solo instrument are notoriously impossible to play,” said Carlisle, noting that Xenakis himself predicted that these two pieces for percussion would be playable … someday. “While some performers have come close, I didn’t see people come up with the solutions I did.

“My work was to come up with innovative methods to improve the playability of ‘Psappha’ and ‘Rebonds.’ I created about four different methods and demonstrated how a performer could combine those methods in different ways to play all of the music.”

Carlisle used both feet and hands to play the piece, an unusual solution. Since he plays drums as well as an array of traditional percussion instruments, Carlisle was well-suited for this adaptation.

He wrote about his innovations for his lecture-recital and performed the pieces to demonstrate his findings and earn his degree. The percussionist also produced a video about his work.

“Because of COVID-19, I presented my lecture and performance by video,” Carlisle said. “I used the same technology I use to teach my UM classes online.” 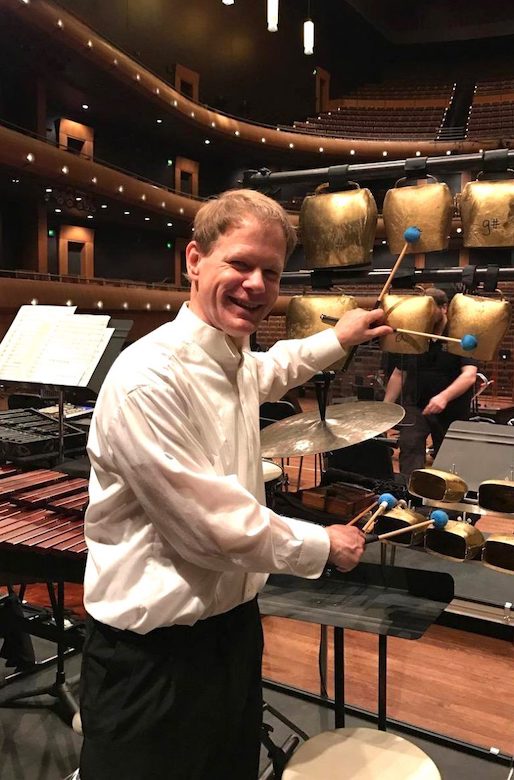 David Carlisle, an adjunct instructor in the UM Department of Music, is principal percussionist for the Memphis Symphony Orchestra. The musician and educator also recently completed his Doctor of Musical Arts at the University of Cincinnati’s College-Conservatory of Music and says that insights he gained while working on that degree will yield benefits for his Ole Miss music students. Submitted photo

Besides finding ways to play “unplayable” music, Carlisle has plenty of other ways to use his solution-oriented mind.

As principal percussionist for MSO, Carlisle does more than perform: he must decide how many players are needed, determine who plays what, make all the assignments and design the onstage percussion space.

“My goal is to maximize efficiency, eliminating all the obstacles that would interfere with percussionists making music,” he said.

This includes drawing a stage plot that maps out all the percussion instruments, measured to ensure that musicians and instruments have enough space and are arranged to create a calm efficiency during performance. The less the percussionists have to run around among various instruments, the more they can concentrate on the music.

During a recent appearance at the Orpheum Theatre, for example, MSO performed the entire score to “Harry Potter and the Sorcerer’s Stone” while the movie played. Carlisle designed a percussion space that accommodated five musicians playing dozens of instruments along 50 feet of stage space.

Percussion is one of the most ancient modes of musical expression; it’s been around for thousands of years in cultures around the world. But until the mid-1800s, it was not fully leveraged in orchestral settings.

“Now, the entire back of the orchestra is percussion,” Carlisle said. “Percussion is continually developing because there are so many kinds of music that utilize percussion heavily now, so it welcomes new strategies and innovation.”

Drawing on Experience to Enrich Teaching

Carlisle’s interest in finding solutions extends to his teaching at Ole Miss. He teaches several sections of Music 103: Music Appreciation and is part of a team of music faculty who are working to reimagine and redesign the course

“This is about helping students, some of whom do not have a background in music, understand some of music’s building blocks, so that they can listen to any kind of music in a new way, talk about it more precisely and engage with it on a richer, more informed level,” he said.

Years ago, Carlisle began to appreciate the impact of engaging listeners by building their knowledge of the music’s elements when he was performing in Canada at the Banff Center for the Arts.

“We took a group of eight musicians and went to small towns that didn’t have an established music scene,” he explained. “We performed a variety of music genres, and we talked about the music beforehand: things to listen for, or the context or history of a piece.

Growing up, Carlisle played with rock and jazz bands, and also performed with the Toronto Youth Symphony Orchestra and studied tabla drumming, a style from India.

“The word ‘pandit’ is really a title that indicates an extremely high level of musicianship; in fact, Pandit Sharda Sahai is a direct descendent of the person who founded the Benares style of tabla drumming 200 years ago,” Carlisle said.

He also learned Ghanaian drumming, and loved it.

“When Dr. George Dor came to Ole Miss and established the Ole Miss African Drumming and Dance Ensemble, I was thrilled to be playing that music again,” said Carlisle, who regularly performs with the ensemble.

“He has been very open and committed to broadening his musicality and perspectives in Ghanaian dances,” Dor said. “He is a very innovative, astute, hardworking percussionist and a great team player.”

The fact that Carlisle enjoys and performs so many different types of music also helps him as a teacher.

“I grew up listening to rock, playing rock, playing jazz, and also playing symphony music, so it’s natural for me to make those connections,” Carlisle said. “It’s what I do as a performer, so it’s not a leap to draw connections between different forms of music with my students.

“Classical music shouldn’t be put behind the glass to look at but not touch. It’s fruitful to see connections across genres. Presenting music in new ways can allow an audience to connect more closely, and that’s the point.”