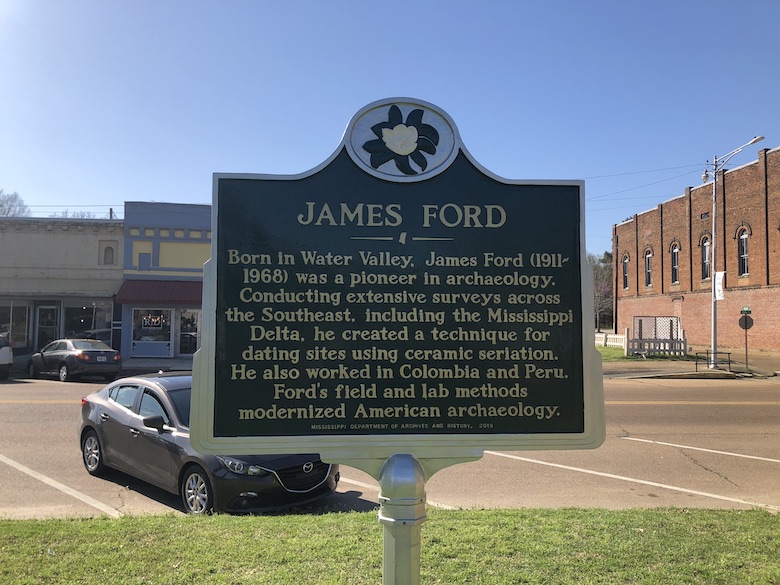 The James Ford historical marker in Railroad Park on Main Street in downtown Water Valley, Mississippi. The marker reads: “Born in Water Valley, James Ford (1911-1968) was a pioneer in archaeology. Conducting extensive surveys across the Southeast, including the Mississippi Delta, he created a technique for dating sites using ceramic seriation. He also worked in Colombia and Peru. Ford’s field and lab methods modernized American archaeology.” Photo by Maureen Meyers.

Maureen S. Meyers, associate professor of anthropology and president of the Southeastern Archaeological Conference, nominated James Ford, a Southeastern archaeologist and one of the SEAC’s earliest presidents, from Water Valley, Mississippi for a historical marker in his hometown. She worked with the Mississippi Department of Archives and History for the nomination, and had the costs covered by multiple professional organizations. The marker was unveiled on Saturday March 20, 2021. 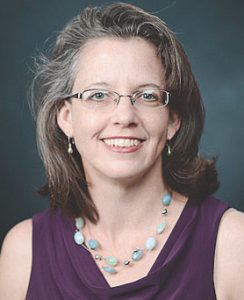 Here are the remarks made by Dr. Meyers at the event:

Twenty-five years ago, as an undergraduate student I took my first archaeology course. James Ford was in the first chapter of my textbook, featured as a “Founder of Americanist Archaeology.” I was fascinated by the story of a small town boy from Water Valley—which the author notes—who worked his way through the Great Depression and who developed the seriation technique, a critical part of how archaeologists, understand change over time and better understand how humans have lived in the past.

Ford’s first work was as someone barely out of high school in 1927, hired by the Mississippi Department of Archives and History, sent to look for Native American sites in Mississippi for three summers. In 1930 he assisted Smithsonian archaeologist Henry Collins at Point Barrow, Alaska—the report is available online—and the artifacts he brought back are now at the U of Mississippi. By 1933 John Walker writes he was “uniquely qualified” to oversee excavations at the Ocmulgee site in Macon, GA. Overseeing hundreds of untrained men, he excavated some of the largest earthen mounds in the Southeast, working all day and teaching the men the basics of archaeology at night. Ford also excavated at the nearby Lamar Mounds. In 1995 I was part of a crew that re-found his excavation pits—they were very straight, 60 years later. Overseeing at one point 700 workmen by 1935, they reconstructed an earthen lodge after excavation. 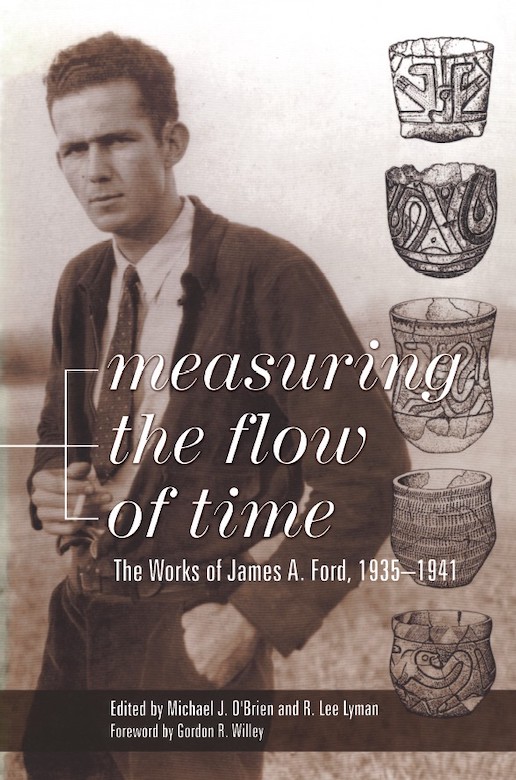 Ford also completed an undergraduate degree and a master’s degree at U of Michigan during the school year, and spent six weeks at Chaco Canyon. He later received a PhD at Columbia University and was named the assistant curator of North American Archaeology at the American Museum of Natural History.

The work he did in Georgia, but also other parts of the Southeast, was instrumental in what became the creation of the Southeastern Archaeological Conference, a now-700 member professional organization of Southeastern U.S. archaeologists that meets yearly. The first meeting was held in 1938 to discuss the ceramic Indian types, At the University we have some of the original envelopes and type collections used at this and subsequent meetings, where Ford and other Southeastern archaeologist would bring native pottery and argue about what time period it belonged to. Eventually Ford created a technique of sequential ordering known as seriation. It assumes that cultural styles change gradually and that archaeologists can chart the changes by recording the  popularity of a particular type in relation to other types. It’s a simple yet game-changing idea in archeology, and allowed archaeologists to understand cultural change over time.

What Ford did was allow archaeologists to move beyond merely recording when things appear, but to ask the important question—why did they appear?

The permanent display in Lamar Hall of some of Ford’s Alaska artifacts that students in ANTH 324 created. They researched the items, learned about how to create displays using curation methods, and then did a presentation.

Today I use seriation as a way to show students that asking why is a goal of science. For example, we examine how car engine size changes over time in the 1970s and tie that to political and environmental global changes. That is, our culture and its changes are reflected in the things we use and leave behind.

As Ford said “For centuries, the perspective of the study of history was narrowed to a listing of battles, kings, political situations and escapades of great men, an activity which is analogous to collecting curios and arranging them in cabinets. Such collections are fascinating to those who have developed a taste for them, but they contribute little towards the processes which are always the foremost interest of science.”  Ford advanced science and fundamentally changed how we do archaeology, so we can ask big questions. 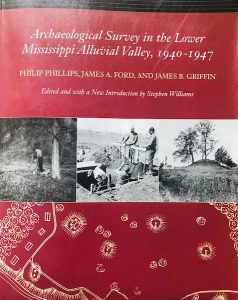 Archaeological Survey in the Lower Mississippi Alluvial Valley, 1940–1947
By Philip Phillips, James A. Ford, and James B. Griffin; Edited by Stephen Williams, University of Alabama Press

If you are interested in Ford there are a few books I’ve brought for people who want to learn more, and I’ve also brought a few examples of the Alaskan artifacts and the ceramics he dug up at Ocmulgee, from the type collections at the university.

In closing, thanks to Mickey Howley who has been supportive and instrumental at every step of this process; Annette Trefzer, whose support and tireless work helped make today possible; Brother Rogers and the MDAH who helped me with this process; the Mississippi Archaeological Association, the Mississippi Association of Professional Archaeologists, and the Southeastern Archaeological Conference, who donated money to make the marker a reality, and the Water Valley Mayor and Chamber of Commerce, who supported the idea. I hope this marker of Ford inspires others to consider the possibilities of understanding the past and how that can moved us forward.