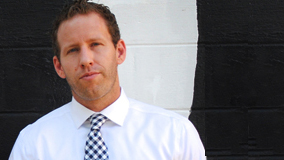 Mark Wagenaar has been chosen as the eighth annual Summer Poet in Residence at the University of Mississippi.

Wagenaar is the 2013 winner of the James Wright Poetry Prize, the Poetry International Prize and the Yellowwood Poetry Prize. His debut collection, Voodoo Inverso, was the 2012 winner of the University of Wisconsin Press Felix Pollak Prize. His poems have appeared or are forthcoming in Field, Image, Ninth Letter, Tin House, the Florida Review, Washington Square, Sou’wester, the Sonora Review, the Chattahoochee Review, The Pinch and Blackbird.

“Mark’s poetry is fascinating in the way it sets up correspondences between thematic ideas and formal tensions,” says Beth Ann Fennelly, a poet and UM associate professor of English who is director of the university’s MFA program in creative writing. She comments that a strong elegiac line runs throughout many of his poems, accompanied by a strong sense of humor.

“Mark’s poems are engaged with the world and will make for an extremely lively evening when he reads at Off Square Books.”

Wagenaar’s appearance at Off Square Books is scheduled for June 19, with a signing and reading beginning at 5:30 p.m.

The residency is designed for poets who have at least one full-length book, either published or under contract, and no more than two books.

As a writer who has been greatly influenced by Southern writers, Wagenaar said he dreamt of the opportunity to contribute to a program that has such a great reputation. Two former Summer Poets in Residence, both of whom Wagenaar greatly admires, had great things to say about the UM residency when he consulted them. Without hesitation, he sent in his application and writing sample.

Wagenaar is delighted to meet Fennelley and fellow UM professor and poet Ann Fisher-Wirth, who worked together to select him for the residency. He also looks forward to talking with students from the MFA in creative writing program, and reading and discussing their work.

“I am so impressed and moved by Mark’s maturity as a poet, the way he can develop a poem beyond its expected limitations and his lyrical intensity,” Fisher-Wirth said. “I look forward to reading more of his work and getting to know him when he’s in Oxford.”

While at UM, Wagenaar will continue to polish the manuscript for his second book of poems, The Body Distances (A Hundred Blackbirds Rising).

As he prepares for his summer residency, Wagenaar has poems in various stages of drafting and some ready to go through a grueling round of magazine submissions. One current poetry project views the lives of composers through unfinished symphonies; other projects contain a series of sonnets that incorporate many traditional traits of the style, but break the line at unexpected moments.

“There are still many gaps in the manuscript, and I hope to take this time to write the poems that the book still needs, he said. “I have 30 days here, so I hope to write the first draft of at least half-a-dozen poems while continuing to brush the dross from the book.”

Wagenaar says he is often a poet who depends upon, and is informed by, the place and the landscape around him, so he hopes to get to know the city and surrounding countryside. He will be hosting a small lecture/literary salon one evening and a poetry reading on another, and he plans to visit many classes during his residency.

“I dearly hope to be of some service to the students I meet, but I’ll certainly settle for just useful,” Wagenaar said.