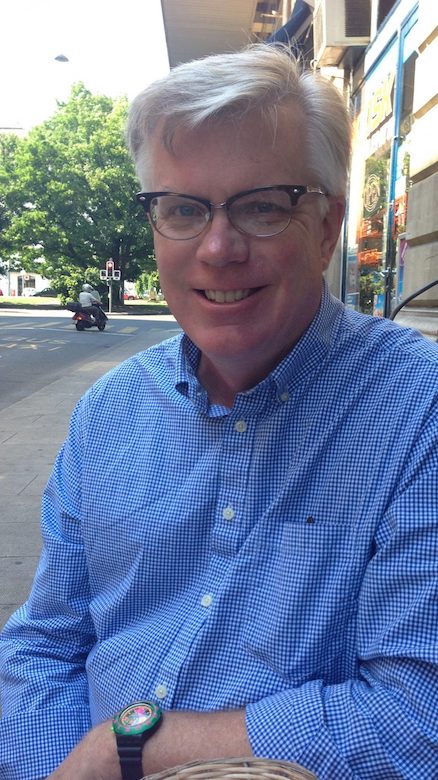 UM economics professor Jon Moen is sharing insights into financial markets and the impact of the COVID-19 pandemic on them. Photo by Barbara Lowe

Jon Moen, professor and chair of the Department of Economics at the University of Mississippi, is parsing some of the financial terms zinging around the news amid the COVID-19 pandemic and offering insights into the state of Wall Street during an unprecedented plummet – one he does not believe is comparable to the Great Recession in 2008.

Moen earned his doctorate from the University of Chicago, where the economics program is ranked in the top 1 percent in the nation. He joined the Ole Miss faculty in 1990, after serving as an economist at the Federal Reserve Bank in Atlanta, one of 12 regional branches of the Federal Reserve System, the country’s central banking system.

Moen is the author of more than 35 scholarly articles. His most recent research study – “How J. P. Morgan Picked the Winners and Losers in the Panic of 1907: Resolving Adverse Selection and Restoring Surplus to a Frozen Deposit Market” – was accepted for presentation at the 2020 Annual Conference of the Economic History Society at St. Catherine’s College at Oxford University.

Let’s begin with some ABCs. What’s the difference between a stock and a bond?

A stock is an ownership share of the future earnings of a company. When a company is profitable, the stockholder gets a share of that profit. A bond is a loan to a private company or government entity made by the bondholder.

For most people, the income from a bond is made either by collecting interest payments on the bond – the loan – or by selling it for more money than you paid for it. Most people’s financial investments, such as a pension fund, are a mixture of stocks and bonds.

How do you know if you’re making money with your stocks?

There are three major U.S. indices (indexes) that take the temperature of the New York Stock Exchange and other equity markets. These are the Dow Jones Industrial Average, the Standard and Poor’s (S&P) 500, and the NASDQ (National Association of Securities Dealers Automated Quotations).

How do these indices differ from each other?

The Dow Jones measures the future earnings of 30 companies, each of which represents a major sector of American economy. That’s why it’s called the “industrial average.” For example, some of the companies in the Dow are Exxon Mobile (energy), Walt Disney (entertainment), McDonald’s (fast-food restaurants), Microsoft (technology) and United Health (health care) – that’s just a sampling.

The S&P 500 is an index of a diverse group of 505 smaller companies, from BorgWarner, which makes and supplies components for the automotive industry, to companies that sell real estate.

The NASDAQ is the most recently created index. It measures computer trading. There’s no “place” where this trading takes occurs, like the floor of the New York Stock Exchange. And there are no people physically trading stocks. It’s all done by high-speed computer.

Why are there big swings in the stock exchange, for example, when a lot of investors are buying or selling their stock at the same time?

It’s kind of like being in a grocery store and seeing a lot of people buying a certain thing. It makes you think, “Maybe I should buy that, too.” Investors look at what other investors are doing, and they don’t want to be left out as a buyer or a seller, so they start doing the same thing – even if they don’t know why they’re doing it. It’s herd behavior.

A lot of people are comparing the losses on the stock market now to the crash in 2008. Is the current financial situation just a repeat of that?

No. These are two very different situations. Now, there is a specific, identifiable reason for the market decline: expectations of decreased earnings by companies and individuals because COVID-19 is putting them out of business. Businesses are shutting down because of something completely out of their control; they’re not just behaving badly or making bad decisions as they were in 2008, when they were creating layers of derivatives based on mortgage-backed securities.

This pandemic isn’t happening on paper. It’s a real thing in our environment.

What’s the role of government when the stock market goes south?

The government identifies causes and sees if there is anything it can do to mitigate or dampen the effects of the losses.

Is there such a thing as a stock market going to zero – so that stocks have no value anymore?

That didn’t happen even in the Great Depression. It could happen theoretically, but it’s never occurred.