MAC Honors Scott Barretta with Excellence in the Arts Award

Writer, editor and research has contributed greatly to the world’s understanding of the blues 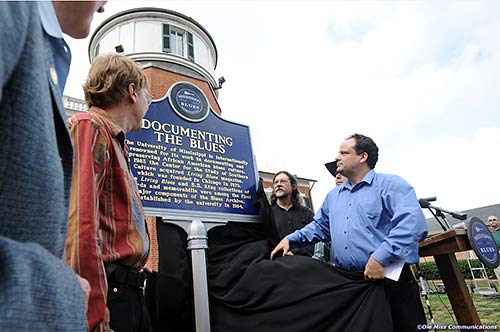 Scott Barretta, writer and researcher for the Mississippi Blues Trail and an adjunct instructor of sociology and anthropology at the University of Mississippi, has lived in the state for 16 years, but his blues journey began long before his arrival here.

Barretta’s multidecade musical odyssey has led to him receiving the Mississippi Arts Commission 2016 Governor’s Award for Excellence in the Arts for Mississippi Heritage. The award will be presented at the 28th Governor’s Awards ceremony, set for 6 p.m. Feb. 11, 2016 in Jackson.

“I’ve worked with MAC over the years in various capacities, and have always followed and admired the Governor’s Awards because they’ve honored so many of my heroes and friends,” Barretta said. “I’ve previously written nomination letters for others and attended multiple ceremonies, and it’s kind of a shock to now be on the other side.”

Barretta, who grew up in northern Virginia, recalls first seeing live blues while visiting the Smithsonian Folklife Festival with his parents. He began exploring the Mississippi blues roots of rock artists around age 14.

He collected blues LPs and, within a couple of years, began venturing out regularly to clubs in the nation’s capital to hear artists such as Willie Dixon and John Lee Hooker.

As a student at George Mason University and the University of Virginia, Barretta focused his undergraduate and graduate work on political sociology, concentrating on homelessness. He remained a fan of the blues and did some research on blues history at UVA. In 1992, his doctoral studies took him to Lund University in Sweden, where his adviser encouraged him to pursue the topic further.

Barretta addressed issues around the reception of the blues by new audiences, including Swedes. To many people, the blues is both exotic and universal, he said.

“The larger-than-life figures in the blues and the legendary stories about artists such as Robert Johnson certainly have a romantic appeal, but I think that the blues’ typical themes about romantic disappointment and its pragmatic solutions to these problems, such as getting rid of the ‘blues’ by singing and playing the blues, is easy for any human being to relate to,” Barretta said.

There’s also a non-mainstream appeal in the songs that attracts listeners worldwide.

“It’s often hard to imagine nowadays but, like folk music, the blues was also an important ‘alternative’ music for many young people outside of African-American culture back in the ’50s and ’60s when there was so much questioning of mainstream values and culture,” he said.

Barretta began writing for the Swedish blues magazine Jefferson, named for Blind Lemon Jefferson and entirely in Swedish, and in 1995 became its editor. This led him to write for other publications in the United States, including Living Blues, a bimonthly publication of the University of Mississippi Center for the Study of Southern Culture. He first came to Mississippi in 1988 to attend blues festivals and visit juke joints in Clarkdale, Greenville, Chulahoma and other places. He met Living Blues editor David Nelson, who recruited Barretta to succeed him as editor in 1999.

“I really had no plans for leaving Sweden when David initially approached me, but I eventually decided that it was a once-in-a-lifetime opportunity to get paid to study blues in Mississippi,” Barretta said. “I was an academic who was editing a blues magazine on the side, and becoming a full-time editor at the Center for the Study of Southern Culture seemed like a good move.”

Sixteen years later, Barretta says he has developed a deep love for Mississippi while learning the intricacies of its musical culture and how its connections permeate the state. He has experienced the blues firsthand, getting to know legends such as Bobby Rush and going to Junior Kimbrough’s juke joint, Otha Turner’s fife and drum picnic, the Flowing Fountain in Greenville and Betty’s place in Noxubee County, where Willie King played every Sunday night.
Barretta has not only been witness to the blues, he has helped make it accessible to people around the world. Besides his work with Living Blues and Highway 61 radio program, Barretta is, along with founding editor of Living Blues Jim O’Neal and graphic designer Wanda Clark, on the team that created the Mississippi Blues Trail, which features more than 180 historical markers across the state and as far away as Norway and France.

“It is groundbreaking in terms of cultural and historical interpretation of African-American vernacular culture – the fact that we have so many markers that featured multiple images and over 500 words, and the fact that we’re doing so in Mississippi,” Barretta said. “Other states and regions often contact us to inquire about how they can do this, but no one has really followed suit.”

Still researching and writing for the Blues Trail, Barretta hosts his weekly radio show, writes a weekly column for The Clarion-Ledger newspaper in Jackson, Mississippi and teaches courses, including Anthropology of Blues Culture, at UM. He collaborated with photographer Ken Murphy on the coffee-table book Mississippi: State of Blues and is the coauthor of the Mississippi Blues Trail Curriculum.

He is working with filmmaker Joe York and UM’s Southern Documentary Project to produce the forthcoming documentary “Shake ‘Em on Down: the Blues According to Fred McDowell.”

Barretta has worked tirelessly to help students, faculty and all Mississippians better understand the social significance of the blues, said Kirsten Dellinger, chair and professor of sociology and anthropology.

“The Governor’s Award provides much-deserved recognition of Scott’s expertise and shines light on the tremendous amount of behind-the-scenes work he has done for many years to document, analyze and share the meaning of the blues with a wide range of audiences,” Dellinger said. “Scott has made a mark on Mississippi’s airwaves, highways and classrooms through his ‘Highway 61’ radio show, work to establish Blues Trails markers throughout the state and efforts to bring blues history into the curriculum at all educational levels.”