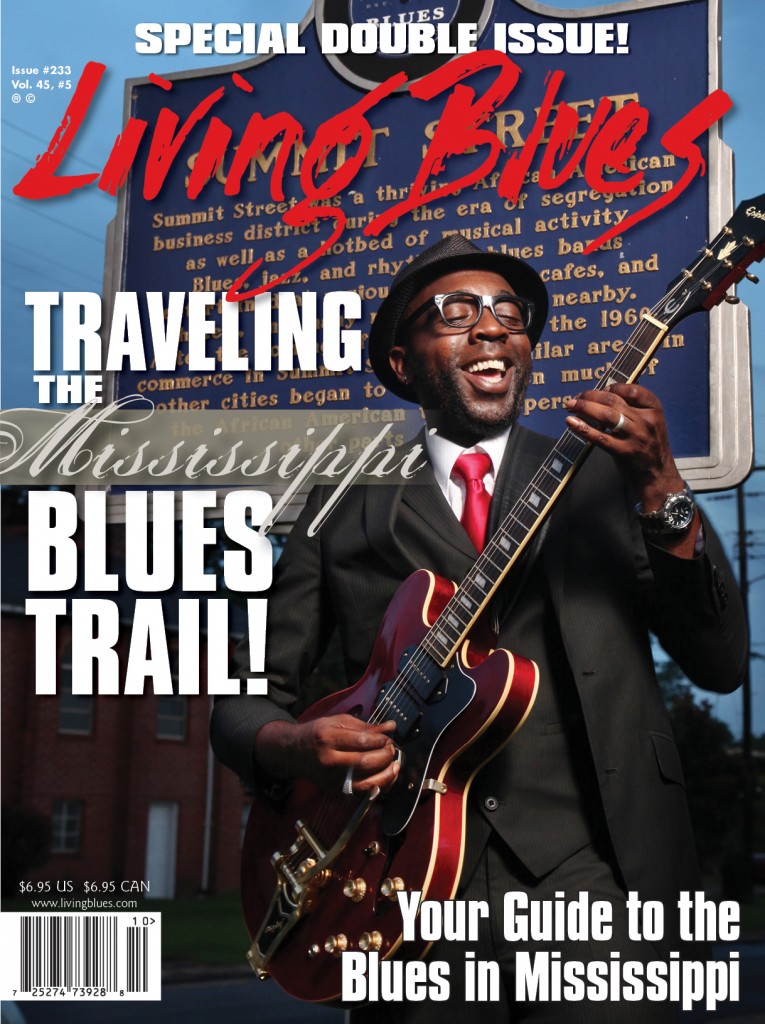 Blues tourism in Mississippi is highlighted in the special October double-issue of Living Blues magazine. Focusing on more than 180 Mississippi Blues Trail markers, the issue spotlights the people, places and themes of the blues in Mississippi with hundreds of destinations including clubs, museums, festivals and restaurants.

The issue is underwritten with a grant from Visit Mississippi.

“We have decided to revisit the blues in Mississippi and provide readers with a travel guide to the markers and some of the many exciting experiences visitors can have while driving the back roads of Mississippi,” said Brett Bonner, editor.

This is the second-largest issue of Living Blues ever, and the second time Visit Mississippi has collaborated with the magazine to produce a Mississippi-themed issue. Living Blues was founded in Chicago in 1970 and was acquired by the University of Mississippi Center for the Study of Southern Culture in 1983.

“Ten years ago, we partnered with Living Blues, but that was before the state embarked on the Mississippi Blues Trail marker program, before the B.B. King Museum and Delta Interpretive Center opened its doors, and before festivals like Juke Joint and Mighty Mississippi were making waves internationally,” said Malcolm White, director of Visit Mississippi. “We here at Visit Mississippi felt like it was high time to revisit the partnership with Living Blues, the nation’s quintessential blues publication, during our 2014 Year of the Creative Economy campaign.”

White said that Living Blues’ writers, researchers and photographers have worked with them on the Mississippi Blues Trail since its inception, so it was only natural to help share the story of one of the state’s greatest tourism assets.

Living Blues received a Mississippi Blues Trail marker from the state in 2009, which is located outside of Barnard Observatory on the UM campus. The magazine was also honored as a past recipient of the prestigious Blues Foundation Keeping the Blues Alive Award.

“With the generous support of Malcolm White and Visit Mississippi, I once again tapped my dynamic blues duo of writer Scott Barretta and photographer Bill Steber to tackle the project,” Bonner said.

The effort of hard work of several months, 5,000 miles, 40,000 words, and thousands of photos later, the issue is a user-friendly guide for adventurers traveling the Mississippi Blues Trail. Using the Mississippi Blues Trail Markers as anchors, there are hundreds of destinations identified throughout the state including museums, juke joints, festivals, famous gravesites, and more than 100 places to eat great Southern food.

This issue of Living Blues is also available as a digital edition, with songs available to correspond with each region. Downloads are available on the Living Blues Facebook page. For more information, visit http://www.livingblues.com/.