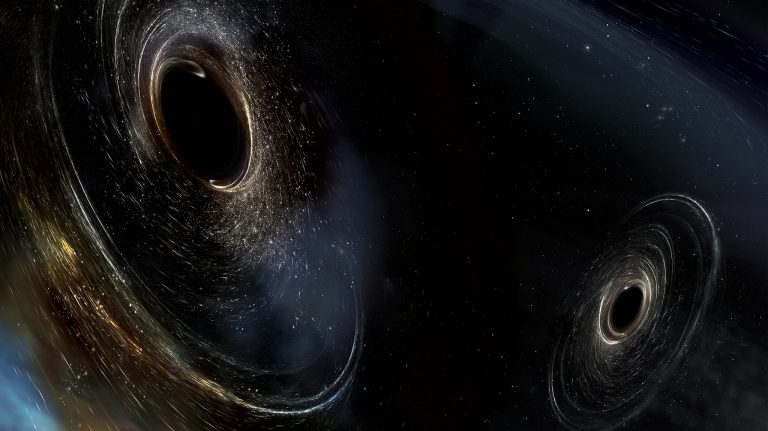 The black holes detected by LIGO are much more massive than any previously observed using X-ray telescopes. Here, two black holes spiral around each other just before merging into one massive black hole. Illustration courtesy LSC/Sonoma State University/Aurore Simonne

University of Mississippi researchers involved with the Laser Interferometer Gravitational-wave Observatory Scientific Collaboration have confirmed that the international partnership has made a third detection of gravitational waves, demonstrating that a new window in astronomy has been firmly opened.

The LIGO Scientific Collaboration is a group of more than 1,000 international scientists who search for cosmic gravitational-wave signals together with the European-based Virgo Collaboration. LIGO made the first-ever direct observation of gravitational waves, ripples in space and time, in September 2015.

The second detection was made in December 2015. The third detection, called GW170104 and made Jan. 4, 2017, is described in a new paper accepted for publication in the journal Physical Review Letters.

“This new detection is important because it allows us to further test the nature of gravity,” said Marco Cavaglia, associate professor of physics and astronomy and principal investigator of the University of Mississippi LIGO Group. “Our tests show that Einstein’s general relativity works flawlessly even in these extreme situations. None of the tests we performed indicate any need for corrections to Einstein’s theory.”

As was the case with the first two detections, the waves were generated when two black holes merged to form a larger black hole. The latest finding solidifies the case for a new class of black hole pairs, or binary black holes, with masses that are larger than what had been seen before LIGO.

The newfound black hole, formed by a pair’s merger, has a mass about 49 times that of our sun. This fills in a gap between the masses of the two merged black holes detected previously by LIGO, which had solar masses of 62 (first detection) and 21 (second detection) solar masses.

The new observation occurred during LIGO’s current observing run, which began Nov. 30, 2016, and will continue through the summer. The observations are carried out by twin detectors, one in Hanford, Washington, and the other in Livingston, Louisiana.

In all three cases, each of LIGO’s twin detectors detected gravitational waves from the tremendously energetic mergers of black hole pairs – collisions that produce more power, during the instant before the black holes merge, than is radiated as light by all the stars and galaxies in the universe at any given time.

“The University of Mississippi is so pleased to be a member of this international collaboration of talented scientists and engineers, which is producing such astounding breakthroughs,” Chancellor Jeffrey Vitter said.

“It is a testament to the quality and reputation of our physics department and research faculty to be an integral part of this endeavor since 2007. Their work is a great example of UM’s transformative impact on our understanding of the world.” 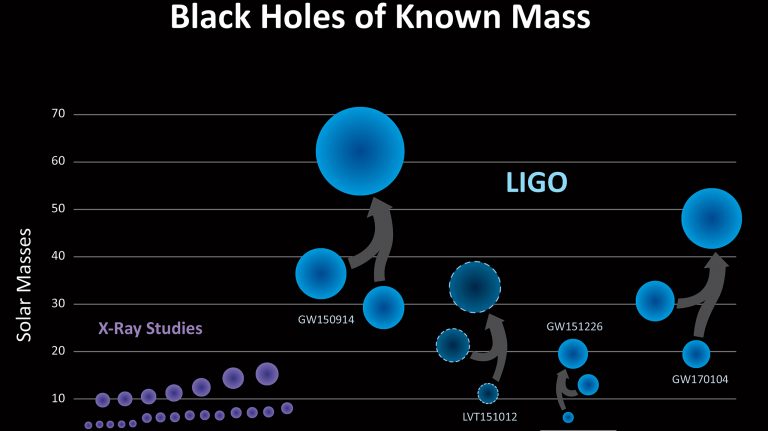 The newest observation also provides clues about the directions in which the black holes are spinning.

As pairs of black holes spiral around each other, they also spin on their own axes – like a pair of ice skaters spinning individually while also circling each other. Sometimes black holes spin in the same overall orbital direction as the pair is moving – what astronomers refer to as aligned spins – and sometimes they spin in the opposite direction of the orbital motion: an anti-aligned spin.

What’s more, black holes also can be tilted away from the orbital plane. Essentially, they can spin in any direction.

The new LIGO data cannot determine if the recently observed black holes were tilted but they can indicate if the black holes were aligned or anti-aligned compared to the overall orbital motion, and this offers clues about how the pair formed.

The other model proposes that the black holes are born together, forming when each star in a pair explodes and then, because the original stars were spinning in alignment, the black holes remain aligned.

The study also again puts Einstein’s theories to the test. LIGO researchers looked for an effect called dispersion, which occurs when waves in a physical medium travel at different speeds depending on their wavelength.

For example, light in glass disperses; this is how a prism creates a rainbow. Einstein’s general theory of relativity forbids dispersion from happening in gravitational waves as they propagate from their source to Earth. LIGO did not find evidence for this effect.

“This third confirmed gravitational wave detection is another step to an entire new field in astronomy: gravitational wave astronomy,” said Josh Gladden, UM vice chancellor of research and sponsored programs. “This new way of observing will deepen our understanding of our universe in ways we could not imagine just a decade ago. UM is proud to be part of this revolution in astronomy and physics.”

Scientists will continue to search the latest LIGO data for signs of space-time ripples from the far reaches of the cosmos. They are also preparing technical upgrades for LIGO’s next run, scheduled to begin in late 2018.

“During the time between observing runs, the detectors’ sensitivity to gravitational waves will be improved,” said Katherine Dooley, UM assistant professor of physics and astronomy. One of the upgrades will draw from Dooley’s research.

“A squeezed light source will be installed to manipulate the quantum nature of light and make the detectors even more precise measurement devices,” she said.

“With the third confirmed detection of gravitational waves from the collision of two black holes, LIGO is establishing itself as a powerful observatory for revealing the dark side of the universe,” said David Reitze, a physicist at the California Institute of Technology and executive director of the LIGO Laboratory. “While LIGO is uniquely suited to observing these types of events, we hope to see other types of astrophysical events soon, such as the violent collision of two neutron stars.”

LIGO is funded by the National Science Foundation and operated by Caltech and the Massachusetts Institute of Technology, which conceived and built the project.

LIGO partners with the Virgo Collaboration, a consortium including 280 additional scientists throughout Europe and supported by the Centre National de la Recherche Scientifique, Istituto Nazionale di Fisica Nucleare and Nikhef, as well as Virgo’s host institution, the European Gravitational Observatory. Additional partners are listed at http://ligo.org/partners.php.