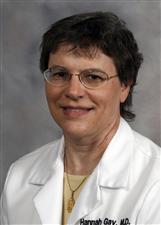 One of the world’s most influential people will deliver the keynote address at the annual spring convocation for the University of Mississippi’s Sally McDonnell Barksdale Honors College.

Dr. Hannah Gay, who was recognized by Time magazine for “orchestrating an incredible breakthrough” in the long-running search for an HIV cure, will speak about her experiences as a student, mother and doctor in a world laden with public health challenges.

Douglass Sullivan-Gonzalez, Honors College dean and associate professor of history, said he believes Gay will deliver timely questions and answers that will encourage Honors College students to make a difference in the world.

“Dr. Gay and her team have become renowned as pioneers in HIV/AIDs treatment by assessing and acting in creative and imaginative ways,” Sullivan-Gonzalez said. “Honors students need to see that they can set new standards – just like Dr. Gay – as they work to answer life’s toughest questions through hard and creative interaction with our community.”

In 2011, Gay and her team accomplished only the second recorded “cure” of HIV. An infant, born to a HIV-positive mother, was given a faster and stronger dose of medication, which eradicated the HIV cells before they could take refuge in the baby’s body.

After two-and-a-half years, the child still does not need to take HIV medications.

“Her team’s treatment could become the ‘new standard of care,’” Sullivan-Gonzalez said.

Gay graduated from the University of Mississippi honors program with degrees in biology and chemistry in 1976 and earned her M.D. from the UM Medical Center in 1980.

“As one of our own, she has already made an incredible difference in the life of one infant and potentially, in the lives of millions of others worldwide,” Sullivan-Gonzalez said.