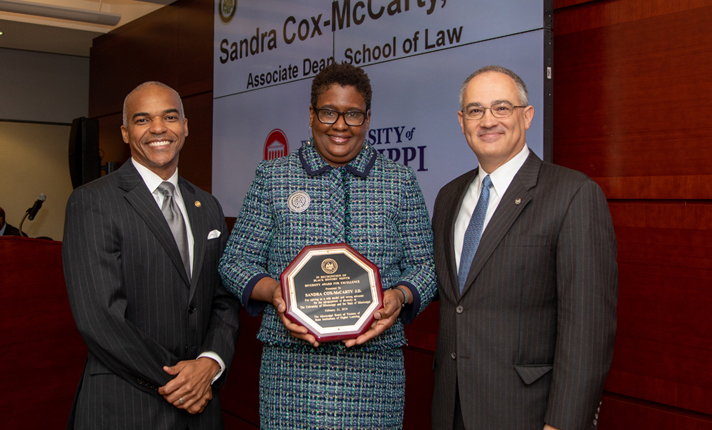 Sandra Cox-McCarty, associate dean for administration and diversity initiatives at the University of Mississippi School of Law, is dedicated to diversity and inclusion.

For more than 27 years, she has worked diligently to create an atmosphere of inclusivity and tolerance. Because of her efforts and successes, Cox-McCarty has be recognized for her work by the board of trustees of Mississippi Institutions of Higher Learning with its Excellence in Diversity Award.

Cox-McCarty (BA political science ’84) joined the law school in 1992 and has dedicated her career to making it a diverse and inclusive environment for all students. Her main role is dealing with administrative day-to-day aspects of the school. But she does much more than that for students, the school and the university behind the scenes.

She coordinates HBCU visits to the law school and develops relationships with those institutions through pre-law initiatives. In service, she mentors prospective law students and continues to serve as adviser for the Undergraduate Black Law Students Association.

“I am honored to have received this award,” Cox-McCarty said. “I want all students to feel welcome at the law school. I know how overwhelming the law school experience can feel initially and if I can help in any way, I would like for the students to know that my door is always open as a safe space. “

Last year, Cox-McCarty also was among 30 recipients nationwide to receive the Council of Legal Education Opportunity award for Education, Diversity and Greater Equality. She was honored with the CLEO EDGE award at the council’s annual conference in November.

One of Cox-McCarty’s many mentees includes UM alumnus Rod Hickman, who was influenced by Cox-McCarty before his legal education career even began. When he was accepted into the program, he had several questions about the atmosphere at the law school. However, those concerns were put at ease when he got a call from an administrator, Cox-McCarty, who called him personally to answer his questions.

Hickman graduated from the law school in 2017 and practices at Brunini Attorneys at Law in Jackson, but the foundation of his career began with his first conversation with Cox-McCarty.

“I don’t think there is a more deserving person for this award,” he said. “She is an asset to the law school and has been for a long time. As a pillar of the law school community, she puts in a lot of hard work and is so passionate about it.”

Hickman began working closely with her in coordinating efforts with HBCUs, including Law Preview Day events and recruiting, but he said she does so much more than that.

“She helps make sure the environment at the law school is conducive to diversity, and makes sure all students are heard, regardless of race, nationality, sexual orientation or even age, since many nontraditional students attend law school,” Hickman said.

Hickman followed Cox-McCarty’s lead and began to mentor incoming students as well, including second-year law student Conisha T. Hackett. Of the many tidbits Hickman impressed upon her, he suggested Hackett get to know Cox-McCarty. After meeting her for the first time, Hackett then began to look to Cox-McCarty as a resource within the law school.

“She is more of a guidance counselor, helping us navigate our way through law school and life,” Hackett said.

She described McCarty as having a confidence that permeates through the lived experiences of her students.

When Hackett chose to run for vice-president of the law school’s Student Bar Association, she turned to Cox-McCarty for advice.

“She reminded me that if something doesn’t work out the way we want it to, we can mold that experience into something else and redefine what success looks like.”

Hackett, from Summit, said Cox-McCarty’s conversations have inspired her and redefined what diversity and inclusion mean to her.

“Inclusion does not really happen because other people are in the room; it’s about including them in the way that you think,” she said. “I didn’t really grasp that until after one of my conversations with her.”

As busy as Cox-McCarty is, she always finds time to speak with students, and her door is always open.

“Even if she doesn’t have the time, she’ll make time for you, which is so valuable,” Hackett said. “When you sit across from her, she treats you as an equal and you can open up and be honest. She’s always honest with me, despite everything else.”

Valuable lessons have been learned along the way, according to Hickman, Hackett and countless other current and former students.

“She has meaningful conversations with you and always leaves you with something to think about, sometimes for days and weeks,” Hackett said. “You’re thinking about it even if you don’t know you are.

“Those little nuggets teach you how to process and articulate your thoughts in a way that you need to move forward. Dean McCarty is truly one of the law school’s most valuable gems.”