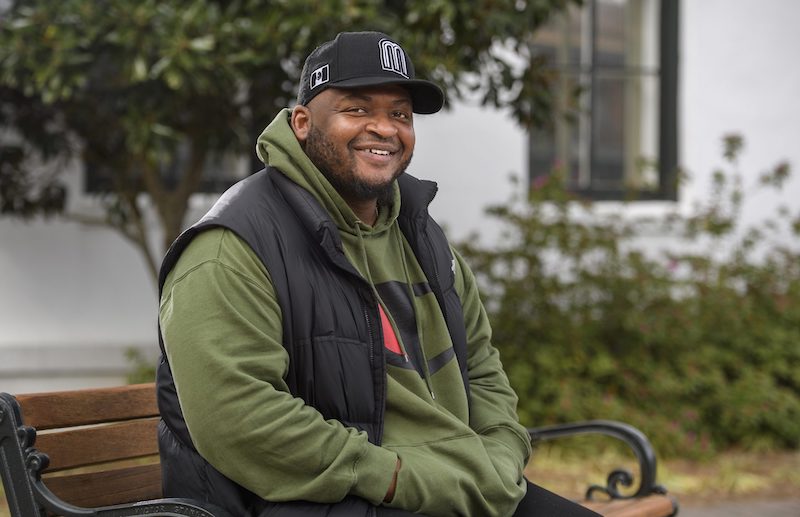 UM professor Kiese Laymon has seen his book ‘Heavy: An American Memoir’ gain national acclaim over the past few months. The memoir, focusing on Laymon’s upbringing in Jackson, has been honored with the Andrew Carnegie Medal for Excellence in Nonfiction by the American Library Association. Laymon is the university’s Ottilie Schillig Professor of English and Creative Writing. Photo by Thomas Graning/Ole Miss Digital Imaging Services

When Kiese Laymon began working on his memoir “Heavy: An American Memoir,” he was writing to an audience of one.

“I wrote that to my mother,” he said. “It was directly addressed to my mom and to my region (Jackson). If anybody outside that region and those people like it, that’s a plus.”

Laymon never expected that, just five months after the book’s release, “Heavy” would garner international acclaim and be honored with several of the highest awards in literature, including the Andrew Carnegie Medal for Excellence in Nonfiction.

Laymon, who serves as the Ottilie Schillig Professor in English and Creative Writing at the University of Mississippi, has seen his memoir recognized as a top book by multiple outlets, including The New York Times, NPR, The Washington Post, Publishers Weekly and many more.

The praise “Heavy” has received, outside that of his family and his hometown, has surprised Laymon.

“I was really writing it to the place and people that raised me,” he explained. “It’s been shocking to see other people feel so much because of the book. I’ve been traveling a lot, and everywhere, from the East Coast to California, people seem to be thanking me for saying stuff that sometimes they wanted to say and couldn’t say.

“They say, ‘Thank you for having the courage to find those words.’ It’s strange to create a piece of art that way more people than you intended to love, love.”

Laymon’s book describes, often with brutal honesty, the successes, failures, happiness and sadness of growing up as an overweight, black child in Jackson and the adult that upbringing eventually created.

“In his artfully crafted and boldly revealing memoir … Laymon recalls the traumas of his Mississippi youth; the depthless hunger that elevated his weight; his obsessive, corrective regime of diet and exercise; his gambling, teaching, activism, and trust in the power of writing,” said the American Library Association, the organization that has presented the Andrew Carnegie Medal since its inception in 2012.

As recognition continues to cascade in for Laymon, he said that some of the highest praise he has received has come from colleagues in the UM writing department, a group he called “inspirational.”

“‘Heavy’ is one of the most honest and intense books I’ve ever read,” said Ivo Kamps, UM English department chair. “When we tell stories about ourselves, there’s always a tendency to edit our experiences and shape events in ways that have an audience in mind. We probably want to see ourselves as smarter, kinder or more heroic than we really are.

“When you read ‘Heavy,’ you get the feeling that Kiese is telling you the unvarnished truth, no matter how painful, embarrassing and self-incriminating that truth may be.”

Laymon grew up in Jackson, raised by his mother, who instilled a love of reading, writing and learning.

He began writing at a young age and his mother enforced the importance of revision. “Revise, revise, revise” is a refrain in “Heavy,” and Laymon said that mentality applies not only to his writing but to the way his mother taught him to live life. 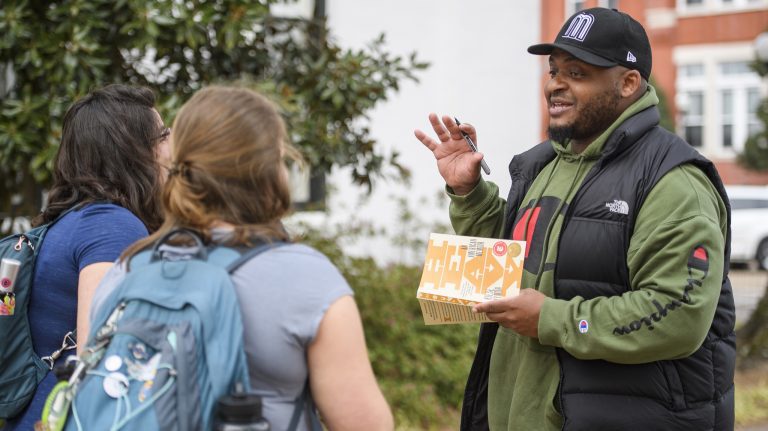 Kiese Laymon autographs a copy of his book ‘Heavy: An American Memoir’ for fans outside the Lafayette County Courthouse. Laymon was a featured speaker in the 2019 Conference for the Book. Photo by Thomas Graning/Ole Miss Digital Imaging Services

“Always commit to looking back at what you didn’t do so well and try to do it better the next time and be honest about how you failed, so you can be less likely to fail going forward. I think things that make us healthy, loving adults can make us competent writers.”

Education played a major role in his upbringing, and “Heavy” pays a lot of attention to his academic successes and failures. Laymon’s mother taught for many years at Jackson State University, and his love of learning pushed him toward the profession.

“I love learning, and I do my best learning through teaching,” he said. “I love watching people take one idea and revise it and have that idea come out a million times better. I like the educational process. I like being a part of it, but I also like watching it happen.

“I like students who inadvertently teach other students in classrooms. I think classrooms are magical places. Obviously, they can be very difficult places, too, but I think there can be magic that happens in classrooms.”

He received his education from Millsaps College, Jackson State University and Oberlin College. He earned an Master of Fine Arts in fiction from the University of Indiana and published his first two books, “Long Division” and “How to Slowly Kill Yourself and Others in America,” in 2013.

Laymon had teaching stints at the University of Iowa and Vassar College before being offered the John and Renee Grisham Visiting Writer Fellowship to teach at Ole Miss in 2015.

“He accepted our invitation and became an immediate hit with our students, as well as the faculty,” Kamps said. “We already knew he was a great writer willing to tackle important and difficult issues, but we quickly learned that he is also a committed educator.

“He cares deeply about our students, their education and their well-being.”

The fellowship turned into an offer to serve as the university’s Ottilie Schillig Professor, which Laymon accepted, saying he wanted to come home with a mission of lifting up the place he loves.

“I love Mississippi with everything I have. I just want us to be better. I’m trying to do my part to help myself be better, but I also want to help our state be better, and I think part of that is acknowledging how wonderful and incredible we have been.

“I think this is by far the most acclaimed and accomplished artistic state. We come from a long lineage of incredible writers who are trying to make the world and the state better, and I think that’s part of my tradition.”

He is using his growing platform to raise awareness and aid children in Mississippi. Laymon donated the $5,000 prize he received for the Andrew Carnegie Medal to youth organizations in the state that help educate and assist underserved youth populations. 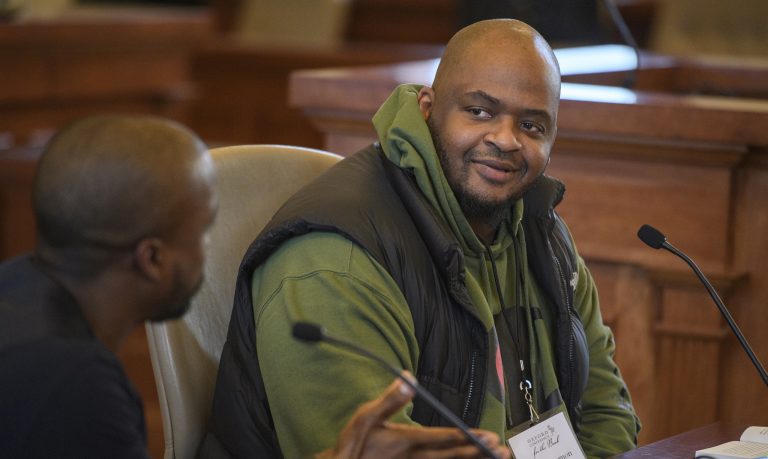 Laymon immediately made his mark on campus as well, Kamps said.

“Kiese has many assets in the classroom – his life experience, his talents as a writer, his keen insights into our society with its persistent racial and gender inequalities – but I think that his ability to connect with his students as a compassionate human being is decisive in establishing a rapport with them and in inspiring them to become writers who can have a positive influence on their world,” Kamps said.

Laymon’s success has not changed the way he’s treated on campus, he said. He sometimes gets congratulations from students and has seen an uptick in requests for letters of recommendation. But his colleagues in the Department of English, many accomplished authors themselves, help keep him focused and grounded.

“It’s hard to find people who are as genius as they are generous, but that’s what I found in my colleagues here.”

Laymon divides time between teaching and traveling to promote his book and collect awards. His most recent, the 2018 Christopher Isherwood Prize for Autobiographical Prose from the Los Angeles Times, will be presented at the LA Times Festival of Books in April.

But most importantly for him, “Heavy” received the approval of its prime target.

“When my mother saw the final product, she was shocked,” Laymon said. “Part of her was sad, but she was also really happy. She created a writer. She created a reader. So, part of her was happy in terms of seeing the art of reading and writing and her investment paying off in this way.

“She was happy with the artistry of it, but sad that I went back and remembered so many things and made some of those public.”

Laymon is also writing prolifically. He just finished writing for a television show, he’s working as a consultant on a film adaptation of “Heavy” and is in the process of writing a new novel.

Although he remains on the periphery with the film, Laymon says it’s not out of the question that he makes his big-screen debut, albeit not playing himself.

“I don’t even care (who plays me),” he said. “I’m trying to be as hands-off as possible. That book was so hard to write; I don’t want to write a screenplay. I’m going to be a consultant.

“I might do one of those cameos, like be one of the janitors in the background or something.”

Traveling the country and appearing at various venues to talk about his book has been rewarding for Laymon, but he said he looks forward to settling down and spending more time at home and “finding time to sit down with my grandmother and just talk and listen to her for a while.”

Laymon also looks forward to shifting his focus back to his students, he said.

“It’s harder to teach when you have all these other things pulling on you, but there is part of me that looks forward to getting done with some of this stuff, so I can get back to focusing on teaching,” he said.