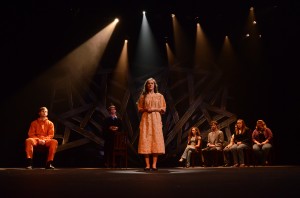 The students will travel to Hollins University for the festival and perform at the Mill Mountain Theatre, thanks to funding and support from several UM departments and organizations. The troupe joins some 900 students and faculty from colleges and universities in Alabama, Florida, Georgia, Kentucky, North Carolina, South Carolina, Tennessee and Virginia. The festival is billed as “the fifth of eight consecutive, weekly celebrations of excellence and achievement in theater in higher education.”

“I am honored and proud that our students have been invited to perform ‘The Laramie Project’ at KCACTF,” said Rene E. Pulliam, interim chair of the UM Department of Theatre Arts. “We are all thankful to the university and all of those who so generously supported us. Without them, this would not have been possible.”

The play was performed in fall 2013 as part of UM Theatre’s “Beyond Boundaries” series. It tells the story of Matthew Shepard, a gay man who was kidnapped, tortured and left on a fence to die. The killing in Laramie, Wyo., drew worldwide attention in 1998. The production deals with issues of homophobia, forgiveness and healing, all of which are part of the theme of Beyond Boundaries performances, which are intended to raise awareness and understanding of the human condition.

The crew includes: stage manager Mallory King, of Cleveland; sound designer Kurt Davis, of Pearl; lighting designer Jeffrey Hannah, who is a UM staff member, scenic designer Christopher Marzella, of Oxford; and crew members Skyler Thomas, of Hernando; Nina Farris, of New Orleans; Kate Lindsay, of Starkville and Paul Kennedy, of Tupelo. King and Lindsay are nominated for the Stage Manager Award, while Marzella and Kennedy are nominated for the Barbizon Scenic Design Award. Farris and Thomas are also nominated for the Irene Ryan Acting Award.