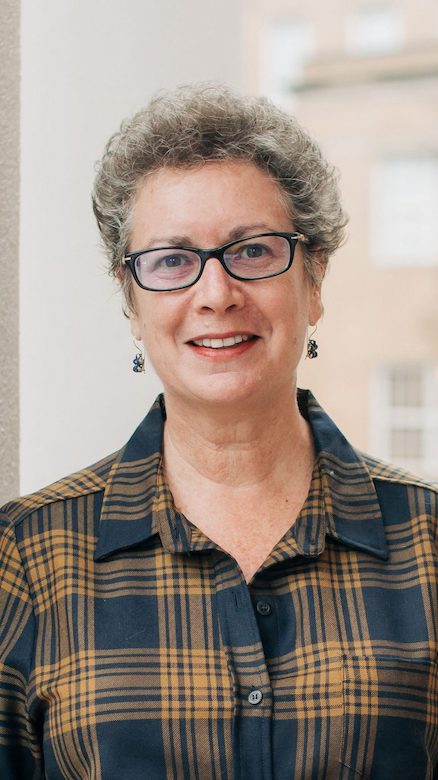 Karen Raber, a professor of English at the University of Mississippi, has been named the university’s recipient of a 2019 Southeastern Conference Faculty Achievement Award.

This is the eighth year the program has honored one person from each of the 14 SEC universities for their excellence in teaching – particularly at the undergraduate level – and research.

“I’m honored to be recognized by the university, and thrilled that the award is being given for what I believe is the very first time to a (UM) professor from the humanities,” Raber said. “I think it can be much harder for folks in humanities disciplines to demonstrate their achievements. …

“Yet our work in the humanities keeps culture and literature alive, thriving and relevant; without it, we would be living in an impoverished world. So I see this award as a step toward acknowledging the importance of the humanities in the university community.”

The approximately 14,000 full-time, tenured faculty members in the SEC are eligible for the award if they have achieved the rank of full professor, have a record of extraordinary teaching and have a record of research that is recognized nationally and/or internationally.

“Dr. Karen Raber has made substantial contributions to literature, which benefits our university, state and nation,” Provost Noel Wilkin said. “Her receiving the 2019 Southeastern Conference Faculty Achievement Award for our university places her among the top faculty recognized in the SEC this year. She is an accomplished scholar, and I am truly appreciative of all that she does to advance her field.”

Raber specializes in Renaissance literature with an emphasis on ecostudies, animal studies and posthumanist theory. She joined the Ole Miss faculty in 1995 after earning her bachelor’s degree from Yale University and her master’s and doctoral degrees from the University of California at San Diego.

“As the recipient of this award, Dr. Raber has been acknowledged by her peers as an exceptional faculty member who exhibits the qualities that are critical in providing our students with a top-tier educational experience,” said Lee Cohen, dean of the College of Liberal Arts.

“This is the second time one of our faculty members in the College of Liberal Arts has received this prestigious award, and I believe this confirms that our faculty is made up of scholars of the highest caliber across the disciplines represented in the college. We are proud of Dr. Raber’s many academic accomplishments and are delighted that she is being recognized with this high honor.”

Raber has written three monographs, including “Shakespeare and Posthumanist Theory,” which was published last spring. She also is author of 2013’s “Animal Bodies, Renaissance Culture,” a finalist for the 2015 Association for the Study of Literature and Environment Book Award, and “Dramatic Difference: Gender, Class and Genre in the Early Modern Closet Drama,” published in 2001.

She is author of more than 30 articles and book chapters, and co-editor of several other works, including “Early Modern Ecostudies: From the Florentine Codex to Shakespeare” with Ivo Kamps, chair of the UM Department of English, and Thomas Hallock, an English, literature and cultural studies professor at the University of South Florida.

Raber’s works in progress include a handbook of Shakespeare and animals, a dictionary of Shakespeare’s animals and a monograph that uses new materialist methods to investigate the nature of meat in early modern culture.

In 2014, Raber was honored with the UM Faculty Achievement Award.

“Not only is professor Raber a prolific and internationally recognized scholar of early modern literature, but she’s also the executive director of the Shakespeare Association of America and the first person in our university to hold that prestigious post.”

On June 1, 2018, Raber assumed the position of executive director of the Shakespeare Association of America, a national organization dedicated to the work of William Shakespeare now based on the UM campus.

“We are becoming a powerhouse among English programs in the U.S., and this award reflects our status,” Raber said. “Bringing the Shakespeare Association of America to the university, under the auspices of the English department, was a huge coup – literally everyone who interacts with the SAA in any capacity now identifies it with us, which brings our department constant positive awareness.

“But the SAA’s decision was also based on the fact that we have gained a reputation for our English faculty, who are of extraordinary quality, nationally and internationally known and respected.”

With the SEC Faculty Achievement Award, Raber receives a $5,000 honorarium from the SEC and will become the university’s nominee for the SEC Professor of the Year Award, which is named in April. That award winner receives an additional $15,000 honorarium.

Both the SEC Faculty Achievement Awards and the SEC Professor of the Year Award are selected by provosts at member universities. The two awards are part of SECU, the academic initiative of the Southeastern Conference, and are designed by the conference to support and promote the academic endeavors and achievements of its students, faculty and administrators.