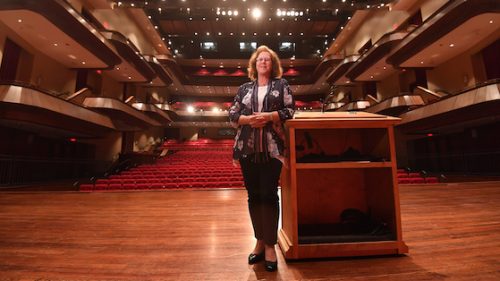 Julia Aubrey, new director of the Gertrude C. Ford Center for the Performing Arts, brings experience and a focused vision to the University of Mississippi’s premier performance venue.

She plans to collaborate with the university and surrounding community to expand the mission of the Ford Center and engage students, residents and their families. Aubrey said she believes the Ford Center can be a producer as well as a presenter, incubating projects that will establish it as a regional arts leader.

“Oxford is such an exceptional place and there’s such a variety of interests,” she said. “We want to tap into that. We want more people to experience this wonderful venue.”

The St. Louis native is part of a musical Ole Miss family. Her husband, Robert, is an instructional assistant professor of music at UM, and her son, Michael, graduated with a double major in international studies and Spanish in the Sally McDonnell Barksdale Honors College and the Croft Institute for International Studies.

Aubrey has been involved in music her entire life. She earned both bachelor’s and master’s degrees in vocal performance and a master’s in theater at the University of Missouri at Columbia. However, she entered college as a political science major.

“Music was just too strong a pull, so I stayed with that discipline,” she said.

Aubrey started her career as a performer, appearing in musical theater and opera productions beginning in 1982. Her major focus soon became direction, serving as a professional artistic director, musical director and state director throughout the country.

She helped bring to life the opera “Hamlet, Prince of Denmark,” composed by UM alumna Nancy Van de Vate, which included invited guest artists and UM faculty, staff and students from the university’s Opera Ensemble. This presentation served as the world premiere of the opera in the Ford Center and the European premiere in Prague, Czech Republic.

Her role as a youth musical theater workshop director for the last 21 years has given her a vision of expanding the workshops and programming for children.

“We want to work toward providing grants and scholarships to children for them to experience the arts and view them as a method of personal expression,” she said. “We are looking forward to dreaming the next chapter in the Ford Center’s history and then making those goals a reality.”

The university community expressed excitement that Aubrey has been named permanent director.

“Julia Aubrey has many years of experience in the arts at a variety of levels: community, university and through national and international organizations,” said Rene Pulliam, interim chair of the Department of Theatre Arts. “She has a vision for the Ford Center to be a catalyst using the arts to bridge the gap between the university and the Oxford-Lafayette community.

“Having worked with her in the past, she is dedicated to the arts and is a tireless worker and advocate. I look forward to seeing what changes she will bring to the personality of arts at the Ford Center.”

“I’ve have had the privilege of working closely with Julia in the past,” he said. “I know her to be a tremendous professional and someone who is committed not only to the arts, but also to our university, city and region. Taking these things together, she is a stellar choice to serve as the Ford Center director.”

Aubrey has begun the Ford Center’s season schedule by bringing in comedian Lewis Black, a national tour of “Fame – The Musical” and performances by the Los Angeles Guitar Quartet and piano quartet Faure.

“We are excited to try to new things and provide entertainment for everyone, no matter what their interest,” she said. “I’m glad to be here with such a great staff and look forward to the future.”

For a full schedule of Ford Center events, visit http://www.fordcenter.org.