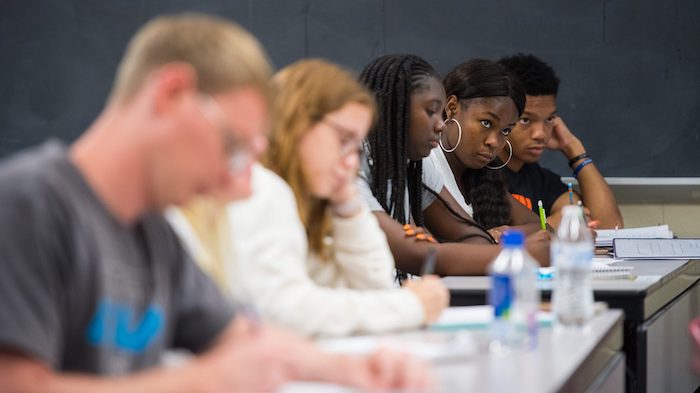 Before arriving at the University of Mississippi two weeks ago, incoming freshmen Eumetria Jones and Jemiah Johnson each expected their summer session experiences to be more or less a breeze.

Jones and Johnson are among 25 African-American students participating in the Mississippi Bridge STEM Program, a monthlong event designed to give them a head start on science, technology, engineering and mathematics majors. Funded by the Hearin Foundation under the Louis Stokes Mississippi Alliance for Minority Participation, the program runs through July 26.

Both Byhalia natives, who graduated at the top of their respective senior classes in May, have found that the rigorous academic curriculum and expanded cultural awareness of university life bears little resemblance to their high school days.

“It’s really been a huge adjustment for me,” said Jones, who plans to major in computer and information science this fall. “I was at the top of my graduating class in high school, but I never really had to study like this before this. Now, I’m spending eight hours a day studying just to keep up with the demands of the courses I’m taking.”

Johnson, a biology major who plans to one day become a biochemist, said coming from a predominantly African-American student body into the very diverse one at Ole Miss has been “very interesting.”

“Before coming here, I was used to everyone I went to school with looking and thinking more of less like me,” she said. “Being here has made me realize that there are a lot more kinds of people in the world than what I thought.”

Alainis Johnson, also a biology major from Ridgeland, said she found being in the Bridge STEM Program is helping her adjust to living on campus and attending the university.

“It’s been nice being with other African-American students who are in the same major that I am,” said Johnson, who wants to attend medical school and aspires to become a surgical nurse. “I’m truly thankful to be having this summer experience before I begin taking full course loads in August.”

“The bridge program’s been good for me,” said Horne, a biochemistry major who’d like to become a neonatologist. “Honestly, I wasn’t expecting to have to be in so many labs. That just shows me how much I need to study. It’s all good.” 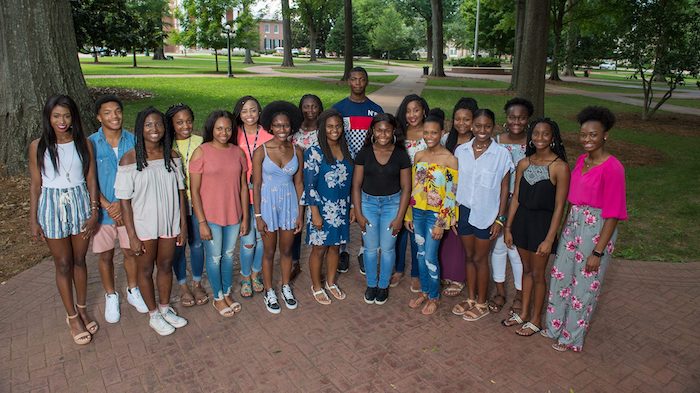 Twenty-five incoming freshmen from across Mississippi are participants in the Bridge Summer STEM Program at the University of Mississippi. Photo by Kevin Bain/Ole Miss Digital Imaging Services

Deundre Briggs, a general engineering major from Southaven, said being in the program has significantly improved his study habits.

“So far, I’ve learned that engineering is going to be tougher than I thought,” he said. “I found out that I can’t just memorize the material. I really have to know it. So, I’m really going to have to work hard to pass.”

A UM staff member said she is pleased with the participants’ feedback about the program.

“All the students are required to take a math course of their choice and EDHE 105,” said Jacqueline Vinson, co-principal investigator of the Bridge STEM Program, EDHE 105 instructor and project coordinator for Increasing Minority Access to Graduate Education, or IMAGE. “Students will also attend various seminars, including health promotion, career center, financial aid, counseling center, student organizations and so forth.”

IMAGE was born from the Mississippi Alliance for Minority Participation, which is funded through Jackson State University by the National Science Foundation’s Louis Stokes Mississippi Alliance for Minority Participation. These programs began with the recognition that more could be done to stimulate growth in the number of STEM-educated professionals.