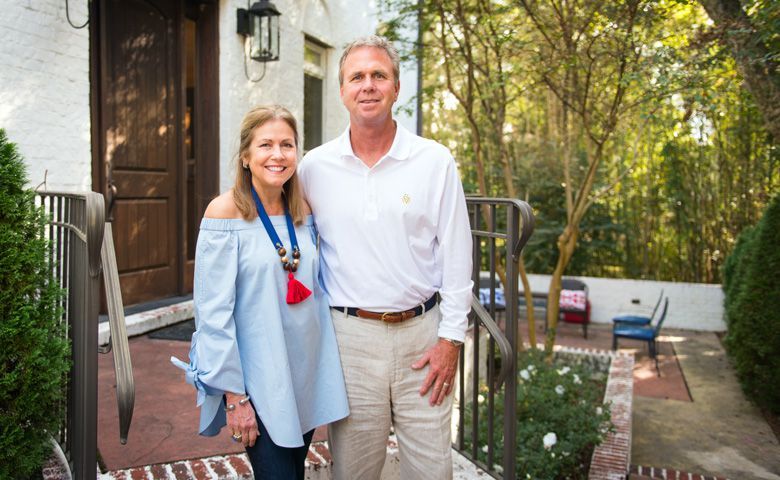 The home (pictured here) that Kirk and Shelly Morgan purchased in Oxford, Mississippi, has kept them connected with campus and friends; renewed their love for the area; and provided an excuse to visit. The whole family often meets here to enjoy Rebel sports and all that Ole Miss and Oxford have to offer.

Kirk and Shelly Morgan of Lexington, South Carolina, say their recent gift to the University of Mississippi’s College of Liberal Arts is, in a sense, simply supporting their family.

“Our Ole Miss family just gets bigger,” said Kirk Morgan, a Charleston, South Carolina, native who knew no one when he arrived at Ole Miss his freshman year. But the relationships he formed on campus and beyond have inspired his desire to give back by establishing the Shelly and Kirk Morgan Fund for Faculty Excellence.

“I have been fortunate enough to realize that Ole Miss is as much an important factor in our entire family’s lives as any other group deserving of support,” Kirk Morgan said. “I am hopeful that the College of Liberal Arts can utilize our financial assistance to continue improving the faculty and facilities and encourage other young students to attend. I have particularly enjoyed the fact that, like our family, many out-of-state students attend Ole Miss.”

The Shelly and Kirk Morgan Fund for Faculty Excellence supports the recognition of outstanding teaching, scholarship and service by a faculty member within the College of Liberal Arts as deemed appropriate by the dean.

“The Morgans’ generous gift is a testament to how much they care for the quality of instruction at the University of Mississippi as well as their desire to ensure that Ole Miss students continue to receive the very best higher education has to offer,” College of Liberal Arts Dean Lee M. Cohen said. “Their gift will have a significant impact for years to come.”

In addition to meeting his wife on campus, Kirk Morgan’s ties to Ole Miss include an uncle, John Gainey, a former All-American Rebel baseball player.

“He encouraged me to visit Ole Miss to meet the coach so that I might get an invitation to join the team, which I got,” said Morgan, who also lettered in golf his sophomore year.

Family ties continued as both of the Morgans’ sons, Eddie and Sam, became UM graduates as well as Eddie’s wife, Alaina McClain-Morgan of Houston, Texas. And one person in particular is like family to the Morgans, even though she’s not a blood relative: Linda Spargo, coordinator of special projects in the Chancellor’s Office, became a friend and trusted educational counselor to both Eddie and Sam. Additionally, Spargo remained “on call” for the family when Eddie and Alaina were seriously injured in a car wreck their junior year.

“During Eddie’s convalescence, the support, friendship and practical advice we received from Dr. Linda Spargo was a prime motivation in my realization that Ole Miss was not just a great school but also a family,” Morgan said.

Morgan found great value in his final year as a student in Oxford: “We made many great friends who remain so today and are a big part of our continued involvement and commitment to Ole Miss.

“We look forward to continuing our support of the College of Liberal Arts for the balance of our lives, to enjoying many new relationships and friends made as a consequence of our gift, and to watching the College of Liberal Arts have an impact on the lives of faculty and students because of this gift,” he continued. “It’s a chance for us to return the favor and make a difference in our university. We want to be a part of its future successes.”

Nikki Neely Davis, a UM development director, thanks the Morgans for their gift.

“We appreciate so much their vision in making this type of gift. While scholarship endowments are crucial, endowments that provide support for faculty and programs are equally important to supporting the university’s future,” she said. “The Morgans are gracious and generous people whom I’ve greatly enjoyed getting to know.”

The Shelly and Kirk Morgan Fund for Faculty Excellence is open to gifts from individuals and organizations. To contribute, send checks with the endowment name noted in the memo line to the University of Mississippi Foundation, 406 University Ave., Oxford, MS 38655; visit www.umfoundation.com/makeagift; or contact Davis at nlneely@olemiss.edu or 662-915-6678.