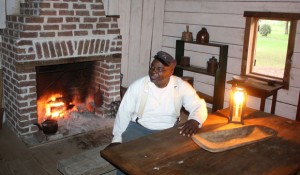 Historic preservationist Joseph McGill Jr. is set to visit the University of Mississippi on Wednesday (April 10).McGill, a program officer for the National Trust for Historic Preservation who works in the Southern Office in Charleston, S.C., is responsible for the states of Alabama, Louisiana and South Carolina.His lecture, “Behind the Big House: My 41 Nights in Slave Dwellings,” which chronicles his stays in the homes of former enslaved persons in several states, will be at 3 p.m. in the Tupelo Room of Barnard Observatory, home of the Center for the Study of Southern Culture. The event is free and open to the public.

“I met Joseph McGill in South Carolina after I heard about his slave dwelling project,” said Jodi Skipper, assistant professor of anthropology. “He stays overnight in slave dwellings to bring attention to their existence and to urge their historic preservation. As a historic preservationist, I admire his innovative way of highlighting these overlooked structures, while bringing attention to the enslaved families who lived there.”

“This tour was meant to help compensate for a lack of narratives about enslaved populations on the Holly Springs pilgrimage tours,” Skipper said. “It is my hope that McGill’s talk will bring much needed awareness to a broader range of our local antebellum sites. I hope that the audience will get a better sense of the lives of enslaved communities and the worlds they built, in addition to how important the preservation of slave dwellings is to all of our histories.”

McGill’s visit is sponsored by the Center for the Study of Southern Culture and the UM Department of Sociology and Anthropology.