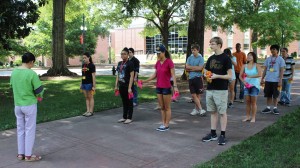 Students in the 2014 StarTalk program.

Exceptional high school students from 13 states recently received intensive instruction in Chinese through the Mississippi StarTalk program at the University of Mississippi during summer session 2014.

Each of the 29 high school sophomores and juniors selected were given full StarTalk scholarships to delve into a cultural program that introduced them to China, its people and the culture.

While earning six hours of college-level Chinese credit, students were introduced to UM’s premier undergraduate Chinese Language Flagship Program from the Department of Modern Languages, one of only 12 such programs in the United States. They also had the chance to sample the college experience.

Adam Jackson, a sophomore at Episcopal Collegiate School in Little Rock, Arkansas, took Chinese 101 this term and enjoyed studying the language while taking the illustrative glimpse into college life.

“I’m glad I got to get a feel for college and learn Chinese,” Jackson said. “I’m starting to look at colleges now and it was helpful to experience living in the dorm and experiencing other aspects of college, like time management.”

StarTalk was created eight years ago to meet the United States’ economic competitiveness and national security needs in learning critical languages. The program can take a student interested in learning the language and teach them enough to enroll in a Chinese language program in college, said Alex Kynerd, program coordinator and 2007 participant.

“It’s a rewarding experience getting to see new students learn the language,” Kynerd said. “Many of them start the class knowing zero Chinese and leave with the ability to talk about their family, friends, hobbies and write diaries in Chinese.”

Jackson had studied Chinese at various camps, but lauded Mississippi StarTalk as the most fulfilling experience to date.

“I had a really good teacher here, and I learned a little more than I expected,” said Jackson.

He intends to submit an application to participate in Mississippi StarTalk next summer.