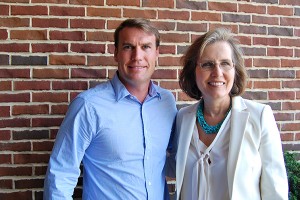 Kathy B. Knight, associate professor and interim chair of Nutrition and Hospitality Management, and Jody Holland, visiting associate professor of public policy leadership, participated in a roundtable discussion with the Appalachian Regional Commission September 12, 2013 in Tupelo. The group is touring the region, talking to those involved with efforts to grow local food economies.

Holland and Knight talked about efforts to strengthen local farmers’ markets and also get more local fruits and vegetables in schools across the state. Removing some of the barriers to doing so would boost the state’s economy by helping local growers prosper, Holland said.

“There’s potential income from this and increased tax revenue that would be important to our cities and counties,” Holland said. “That’s something we need to build on.”

Holland has been working with a grant from the ARC to fund efforts to ramp up capacity in the region’s food systems. He said he believes there’s plenty of support for the movement, which he described as a grassroots one. Farm-to-table food is gaining in popularity around the nation.

“There’s energy around the people, around suppliers, around producers and around consumers, and also infrastructures and institutions to be developed,” Holland said.

But there’s fragmentation in the local food systems. Holland said he believes local officials also need more information about the programs, which might help get some barriers removed. Proponents of the efforts told ARC that the costs of local foods are usually lower than what’s for sale in “big box” retail stores.

Knight has been working on providing nutrition education for children through her nutrition intervention program “Eating Good … and Moving Like We Should.” The program has been based in the Delta and is growing in the Oxford area.

The program has helped establish school gardens in six Delta schools, and Knight’s effort has brought in Delta-area growers to help with the gardens and  get more “farm-to-table” foods in schools. The effort also involves educating students and their parents.