Pushing the Weird in Your Writing

by Sara Kiparizoska, March 31, 2014
Courtesy of The Daily Mississippian 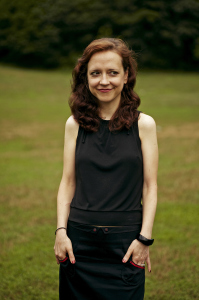 Described by author and creative writing professor Tom Franklin as having the best titles of any author he knows, Megan Abbott has been inspiring Oxford’s readers and writers ever since her first visit down South in 2007.

The current John and Renee Grisham Writer-in-Residence at The University of Mississippi and this year’s Southern Literary Festival keynote speaker, Megan Abbott is an award-winning author of six novels, including “The End of Everything” and “Dare Me.” Her latest novel, “Dare Me,” has been named one of the best books of 2012 by Amazon and Entertainment Weekly and is on its way to becoming a motion picture. Abbott also has a new novel, “The Fever,” slated for release in June 2014.

This past Friday, Abbott’s keynote address at the Southern Literary Festival took the audience down memory lane as she explored the “weirdness of literature” by discussing Archie Comics and Faulkner to Freud and everything in between. Abbott’s quirky humor and humble attitude entertained the audience in the most unexpected of ways.

Starting her keynote by referencing Tennessee Williams, Abbott said that “the weirdness is the greatness in all great books.” She continued to describe the weirdness in some of her favorite novels by admitting that when she first read William Faulkner’s “The Sound and the Fury,” she did not know what she was reading at all.

“This was the first time I was reading a book, finished it, flipped to page one and started again,” Abbott said. “These types of books are the muse to ourselves and to other books.”

Abbott cites Faulkner and Jack Pendarvis as the reasons for her move from New York to Oxford.

“Oxford is the richest literary locale I could have dreamed of,” she said.

Abbott is not only working on her writing; she is also a professor for an advanced fiction workshop at the university this semester. Abbott praised her students for their creativity and “unusual literary surprises.”

Abbott referenced a few of her students in her keynote, and many of them were there Friday night to support her.

Mary Marge Locker, junior English major and current student of Abbott, described her class as “a time to talk about all the great things that make writing weird. Abbott is always so great.”

Abbott received the invitation to be the keynote speaker about a year ago from Beth Spencer, the organizer of this year’s festival. The festival was held as part of 21st Oxford Conference for the Book, bringing in students from universities around Mississippi, Tennessee, Arkansas and other nearby states. As part of the festival, the night’s events after the keynote address at The Inn at Ole Miss included a book signing at Off Square Books and a concert at the Powerhouse.

After this semester, Abbott’s plans definitely include coming back to Oxford. Her next major appearance will be in 2015 as the honorary curator of the William Eggleston exhibition at The University of Mississippi Museum.

“I am very excited,” Abbott said. “It’s a good excuse to come back.”