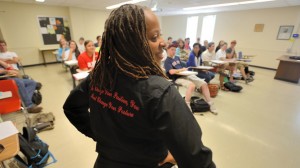 Torina Lewis teaches a mathematics class at the University of Mississippi. UM photo by Kevin Bain.

Business, academic and government leaders warn that the United States must boost its production of professionals trained in science, technology, engineering and mathematics, or STEM, fields to remain competitive in the world economy.

Such an increase will require investments in human capacity across diverse groups, with perhaps the greatest growth potential coming from groups that are underrepresented in the national STEM workforce, including African-Americans and women.

The University of Mississippi is helping to fill this pressing need by recruiting, supporting and graduating more minority doctoral candidates in STEM fields. Two UM departments have received funding under the Graduate Assistance in Areas of National Need, or GAANN, program.

Twelve years ago with the help of a GAANN grant, the Department of Mathematics took on an aggressive initiative to increase the number of minority math professors in the state and nation.

And that’s just the beginning. The U.S. Department of Education has once again awarded the mathematics department a $399,798 GAANN grant to continue its leadership role in producing math scholars. In the same GAANN competition, the university’s Department of Chemistry and Biochemistry also won its own $399,798 award from the program to recruit and support minority doctoral students.

For each grant, the university contributes matching funds of $99,951 for a funding ratio of 80 percent federal to 20 percent nonfederal.

Gerard Buskes, professor of mathematics and principal investigator of one of the grants, said he is confident the program will help UM increase the percentage of STEM professionals in Mississippi.

“There is a broad, national movement to get more math professionals,” Buskes said. “GAANN has helped our relatively small department be at the forefront of bridging the gap and ultimately helping fill the shortage of STEM professionals in Mississippi and in the nation.”

The GAANN program provides fellowships through academic departments and programs to assist graduate students who have excellent records, demonstrate financial need and plan to pursue the highest degree available in their course of study in a field designated as an area of national need.

Producing more math professors is “truly important for Mississippi as the state continues to grow from an agricultural-driven state to a more technological-driven economy,” Buskes said.

What’s more, a 2011 report from the National Center for Education Statistics notes the percentage of African-Americans earning STEM degrees has fallen drastically during the last decade.

But STEM barriers are not unique to African-Americans, said Donald Cole, UM associate professor of mathematics and assistant provost.

“Across the U.S., we are simply not producing as high a percentage of STEM professionals as before,” said Cole, also a co-principal investigator on the grant. “Women and Latinos also lag behind. Because of GAANN, Ole Miss is able to carve out a unique program that eases the financial obligations of obtaining a Ph.D., and also offers mentoring, traveling and overall professional preparation.”

Since 2001, the UM math department has recruited 25 minorities into its graduate program. Thirteen have graduated with doctorates, while eight of the remaining 12 recruits are still in school.

Pursuing a Ph.D. is a long and arduous process with an average time-to-degree of at least five years, Buskes said.

“The investment pays off when we recruit, mentor, train, retain and graduate our students,” he said. “We are not just educating a group of students. We are investing, mentoring and essentially ensuring they finish this program and go into the field.”

In the chemistry department, associate professor Susan Pedigo is spearheading the effort.

“The department has had an aggressive program to increase the number of minority chemistry Ph.D.s for years, but graduate school can be a financial burden,” Pedigo said. “GAANN recognizes the need to help Mississippi promote excellence, graduate level education that produces and trains future young chemists.

“In Mississippi, we have the lowest household income and what that means is that our students just don’t have the resources to pursue higher level degrees. But GAANN recognizes the need and helps lift some of that financial burden.”

The funding should help UM accomplish its goals of providing accessible and affordable education to a diverse student body and preparing STEM leaders and professionals, especially those from underrepresented groups, said Alice Clark, vice chancellor for research and sponsored programs.

“Winning two GAANN awards in the same competition cycle is a first for our institution,” Clark said. “With this great success, Buskes and Pedigo have demonstrated what can be accomplished when faculty collaborate and share their experiences within the competitive funding process.”

“In addition to providing funding for eight or more students to complete Ph.D.s in math or chemistry, these awards serve as a gratifying affirmation of UM’s commitment to quality graduate education and our unique capacity to contribute toward diversity in research and teaching at the national level,” Kiss said.

Torina Lewis, a visiting assistant professor of mathematics, earned her Ph.D. at the university as a GAANN fellow. Before learning about the program, she never thought she would earn a doctorate.

“I was a member of the National Guard and a teacher,” she said. “Obtaining a Ph.D. never entered my mind. But Dr. Cole contacted me and told me about Ole Miss’ wonderful math department. Then he said those magic words, ‘We can get you funding.’”

A 2003 graduate of Southern University at New Orleans, Lewis said that she didn’t have to think long about Cole’s offer.

“I’m glad I came here,” said Lewis, who earned her Ph.D. in December 2010. “They pushed me. They mentored me. Just being around dedicated and respected professionals reminded me once again why I love math so much.”

Lewis, also an assistant professor of mathematics at Bethune-Cookman University, said her job is to introduce a love of math to other minority students.

“Black students lose a love for math so early in life and that’s a sore point for me,” she said. “Maybe, just maybe, the key to getting more students in this awesome field is to produce more professors and teachers. It’s a good starting point.”