Exhibition is the culmination of a seminar class, features ‘fresh, evocative’ works of art 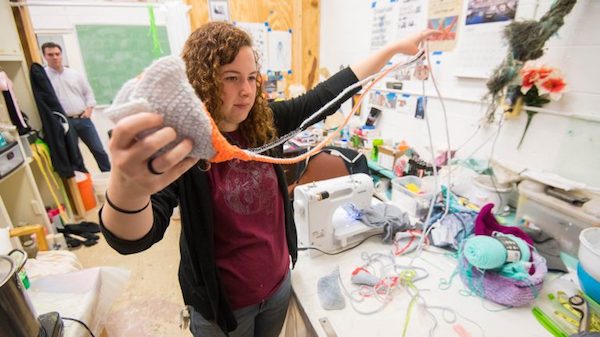 Christen Parker works on soft sculptures in her art studio. Her pieces will be on display April 2-6 at Southside Gallery in the exhibit ‘Chroma.’ Photo by Kevin Bain/Ole Miss Communications

Nine University of Mississippi graduate students are showcasing their artwork on the Oxford Square through three different exhibits as part of a graduate seminar class.

Each exhibit at Southside Gallery features the work of three students, all of whom are working toward an M.F.A. in their respective areas, under a common theme. The first exhibit, “Unknowns Illuminated,” runs through Friday (March 30) at the gallery. “Chroma” follows next week (April 2-6), and the final show is “Manifestations,” the week of April 9-13.

This is the third year Southside has partnered with Philip Jackson, UM associate professor of art, to host students at the gallery.

“We’re always looking to build relationships with emerging artists in the community and we like working with professors and the art department on campus,” said Wil Cook, gallery director. “It’s beneficial for us because it gives us an opportunity to see different work by younger artists and it gives us exposure to a new audience. 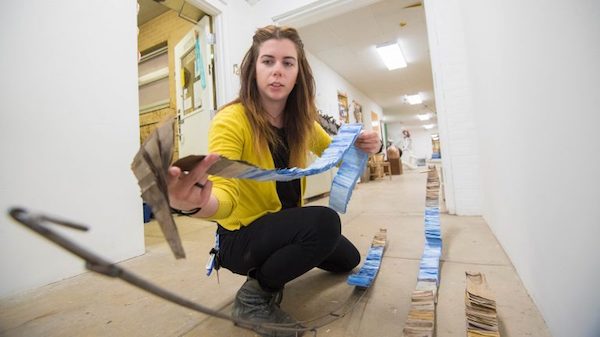 Gabrielle Dinger works on wire sculptures in her art studio. Her pieces will be on display April 9-13 at Southside Gallery in the exhibit ‘Manifestations.’ Photo by Kevin Bain/Ole Miss Communications

“It’s also good for the students because it gives them the experience of showcasing their work and having a presence in an art gallery.”

In “Unknowns Illuminated,” the artists illustrate mystery and void with the presence and absence of light. The goal is to have viewers explore the layers of each piece with what they actually see.

“I want to make these common objects uncommon through light and shadow,” Alexander said. “I hope my drawings lead the viewer to explore these familiar objects with an interest they don’t normally experience on an everday basis.”

Sculptor Nick Vialpando, of Denver, created a large wood structure entirely painted dark black. The structure hangs on the wall and has a concave, half-circle shape that viewers can stand inside, which blocks their peripheral vision. He also added sound to enhance the experience of a void.

“I wanted to confront the viewer with a void of light so they exist as space alone,” Vialpando said.

“Everybody engages with simple shapes,” Meyer said. “Most of us have memories of playing with blocks as kids, and we develop knowledge of the complexity of those forms. I want to invoke curiosity of the complexity and simplicity of these objects.”

The gallery will host an artist talk and reception for “Unknowns Illuminated” at 5:30 p.m. Tuesday (March 27). 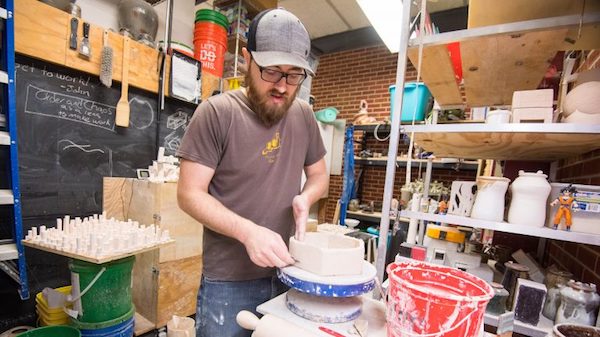 Nicholas Meyer creates ceramics in his art studio. His pieces are be on display through March 30 at Southside Gallery in the exhibit ‘Unknowns Illuminated.’ Photo by Kevin Bain/Ole Miss Communications

The “Chroma” exhibit allows the artists to use intensity of color in an abstract manner to invoke an emotional response.

Ceramicist William McKinney, of Morgantown, West Virginia, is using a miniature sculpture series based on human manipulation of the environment. His inspiration is drawn from the placement of a natural gas pipeline in his home state.

“I want to create awareness of what’s going on around us,” McKinney said. “Being from there, I know firsthand what’s going to happen. I see the benefits, but I also see the destruction.

“I want people to see what’s going on through an abstract object that makes you actually think.”

Sculptor Christen Parker, from Monroe, Louisiana, wants viewers to concentrate on the material itself and is creating pieces of colorful soft sculptures by sewing and crocheting.

Painter Marisa Andropolis, of Chicago, uses abstract paintings of bright colors to convey emotion while incorporating a glimpse of realism in each piece.

“I like taking people out of this known reality and presenting it in a different way through something familiar and recognizable,” Andropolis said. “I want to bring awareness to what is real and what is not, and I want it to be deceptive, inspiring people to asking themselves what is real.”

The “Chroma” exhibit includes an artist talk and reception at 5:30 p.m. April 3.

The final exhibit, “Manifestations,” will feature pieces that communicate for themselves while allowing viewers to contemplate what they are seeing while incorporating their own experiences. Many elements are inspired by both the industrial and natural world.

“I started from specific sources but abstracted them,” Dinger said. “I don’t want to make an object that has a specific representation or message. I want the viewers to bring their own experiences to it and appreciate the piece for what it is.

“I want to inspire a sense of awe where the viewer will want to guess what it is, but can’t quite put their finger on it.”

Ceramicist Will McComb, from Lexington, Kentucky, is using clay sculpture in angular and soft shapes to illustrate a state of change in both architecture and the human body.

“I wanted the interpretation of each piece to be open,” McComb said. “I hope that if I do it just right, I’ll make people see bodies and buildings, but I hope they see the temporariness of everything and that when things are changing, it doesn’t have to be scary. It can be a beautiful thing.”

Sculptor Ian Skinner, of Jacksonville, Florida, is assembling mixed media sculptures of wood and fabricated metals to illustrate change in the environment.

“A lot of my work has been referencing industrial forms in nature, with resemblances of oil refining towers, buoys and other markers for passive travel,” Skinner said. “It’s a commentary of man’s impact on nature through exploitation.”

The “Manifestations” exhibit will feature artist talks and a reception at 6 p.m. April 10.

Jackson said he’s always excited to work with talented young artists. He created this style of course is to share the students’ creative vision with the community and to challenge students with a collaborative experience.

“A majority of exhibitions that artists are invited to participate in, both the topic and the artists that are invited are non-negotiable,” he said. “It is a rare experience that the students have the opportunity to both curate who participates as well as the theme explored.”

Each group of students collaborated around a central theme and produced an entire body of work in less than a semester.

“These works are fresh, evocative and worth the time to see,” Jackson said.