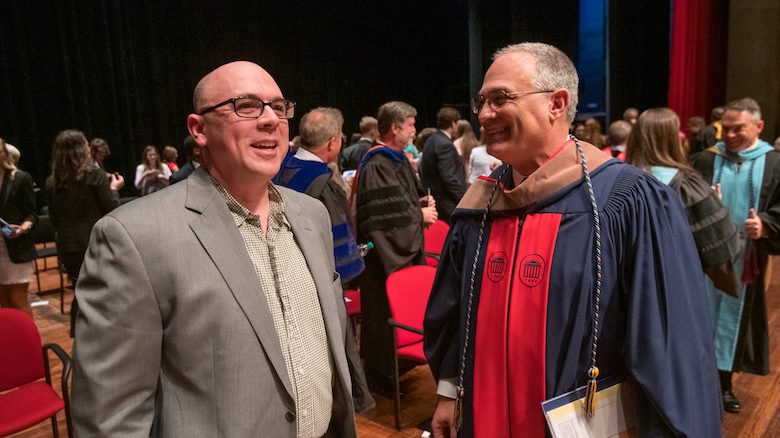 Glowing, superlative-filled recommendation letters paint the picture of a professor who “pours his heart and soul into his work.” Those comments from University of Mississippi students have led to John Young, associate professor of psychology, being named the 2019 Elsie M. Hood Teacher of the Year.

The honor, which is the highest one bestowed on those who make a difference in the classroom at the university, was presented to Young Thursday evening (April 4) at the Gertrude C. Ford Center for the Performing Arts as part of the annual Honors Convocation.

Young said he was taken aback to win the award, given the strength of the university’s faculty across the board.

“I can succinctly say that I did not expect to win or even be considered for this award,” Young said. “Our university is replete with great minds and dedicated professors who educate and inspire every day. To think that I am being recognized among that group is a profound honor and it’s still something of a shock.”

Assistant, associate and full professors are eligible, except previous recipients of the award. The winner receives a $5,000 prize and a personal engraved plaque, and their name also goes on a permanent display in the J.D. Williams Library.

“Dr. Young is an exceptional teacher, well-regarded by his students for his extensive knowledge and his ability to make subjects engaging,” said Interim Chancellor Larry Sparks, who presented the award.

“True to the purpose of the Elsie Hood award, he’s an outstanding example of the traits we value in higher learning: he broadens horizons and demonstrates an unfailing dedication to his students. We’re fortunate to have Dr. Young at the university, and I commend him on this much-deserved award.”

The Elsie Hood selection committee comprises previous recipients, along with the director of Alumni Affairs and a student representative. Criteria include nominating letters that describe examples of exceptional teaching and letters that have been submitted for the nominees in previous years.

The Faculty Senate submitted a proposal to Chancellor J. D. Williams in 1965 to create a program of recognition and awards for superior teaching. The following spring, a committee solicited nominations for an Outstanding Teacher Award from faculty, students and alumni. Vice Chancellor W. Alton Bryant suggested that the award be presented on Honors Days and announced during Commencement exercises, and this has remained the policy. 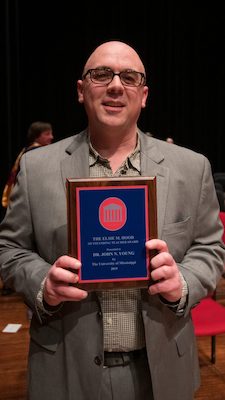 Rimoldi, a professor of medicinal chemistry and environmental toxicology in biomolecular sciences, chaired the selection committee and noted a common thread in letters supporting Young.

“Student nominations consistently speak of Dr. Young in superlatives, pointing to his selfless dedication and commitment to student engagement and learning,” Rimoldi said. “He is undoubtedly making a positive and lasting impact on students and is most deserving of the Hood Award.”

One student called Young an “exceptional educator who pours his heart and soul into his work.”

“He is an excellent teacher who not only provides a wealth of knowledge through his lectures, but who does so in a way that is engaging and understandable for his students,” the student wrote. “Dr. Young’s presentation and evaluation style help to ensure that students learn and retain the most information possible from his courses.”

Another student also was effusive in praising Young’s work. The student said Young made them fall in love with the epistemological method and also influenced their decision to pursue a career in academia.

“I think the best way to summarize his teaching prowess is to simply state that students universally contend that he makes graduate-level research methods fun and interesting,” the student wrote. “Anyone who has taken this course understands the gravity of that statement.”

Young said it’s particularly meaningful to him that students thought enough about their experiences in his classes to take the time to nominate him.

“This is strong reinforcement and indicative of the broader impact of teaching beyond what we can see at any given point in time,” Young said. “I feel a deep sense of gratitude for this award and am very appreciative of the opportunity to learn, grow and share that process with others on a daily basis as a professor.”