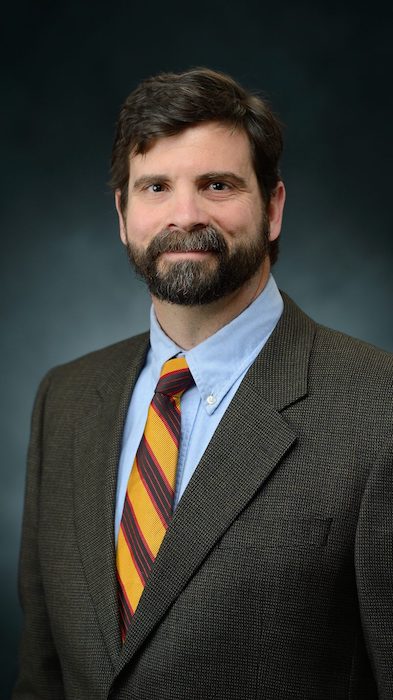 Josh Gladden, who serves as the University of Mississippi‘s chief research officer, has been elected as vice president-elect of the Acoustical Society of America.

Gladden’s role as ASA vice president-elect began Friday (May 15). He will automatically assume the office of vice president on June 6, 2021.

Founded in 1929, ASA is the premier international scientific society in acoustics devoted to the science and technology of sound. The society’s purpose is to generate, disseminate and promote the knowledge and practical applications of acoustics, and help members exchange theoretical and applied knowledge.

The society’s membership includes more than 6,800 leaders in the field of acoustics in the U.S. and around the world.

“The ASA has been my professional home since starting my graduate studies in 1999, and I am thrilled to be given this opportunity to serve the society,” said Gladden, who is the university’s vice chancellor for research and sponsored programs.

“ASA has a long tradition of servant-leaders who listen carefully to the voices of the membership and strive to provide a high level of value to the acoustics community. I’m very excited to be joining that leadership team and carrying on that tradition.”

Gladden became a fellow of the society in 2018. He has served on the archives and history, education in acoustics, and physical acoustics committees, and was an associate editor of the Proceedings of Meetings on Acoustics from 2012 to 2018.

He also serves as director of the Physical Acoustics Summer School.

Following Gladden’s one-year term as vice president, he will serve as a member of the ASA executive council for an additional year. As vice president, Gladden will oversee the society’s Technical Council, which is responsible for coordinating the policies and activities of various committees and technical groups and advises the Executive Council.

Maureen L. Stone was elected president-elect of the society. She is a University of Maryland dentistry professor with a joint appointment in the Department of Neural and Pain Sciences and the Department of Orthodontics and Pediatric Dentistry. She also serves as director of the university’s Vocal Tract Visualization Laboratory.

“I am honored and grateful for the opportunity to serve the ASA and its members as president,” Stone said. “I look forward to working together with the leadership team and all ASA members to continue our important initiatives, encourage new members and motivate progress in the field.”

Although acoustics is a highly interdisciplinary, and mature and established field, the society’s success depends on a healthy mix of both academics and government and industry leaders, Gladden said. This merging creates new and creative concepts and applications that emerge regularly at meetings and in journals.

“It is critical for the long‐term sustainability of the acoustics research community that these novel concepts, techniques and applications be effectively communicated to an ever‐widening group of problem-solvers in both the private sector and government,” he said. “Working on ways to affect that communication will be one of my priorities.

“Another priority is maintaining and growing our early and mid‐career membership. Much work has been done by the ASA in recent years with specific initiatives outlined in ASA strategic plans. I agree this is a vital issue for the health of the society and will work to continue implementing those plans and work with others to develop new strategies in this area.”

The Office of Research and Sponsored Programs serves and supports Ole Miss faculty, staff and students who are pursuing research or other sponsored projects funded by federal, state or private agencies and organizations.

Gladden also served as director of the UM National Center for Physical Acoustics from 2013 to 2016. During that time, external funding for the center increased from $2.8 million to $6.2 million.

His research interests are focused on energy-related materials and include developing novel methods of acoustics and vibration sensing in harsh environments and using these methods to study numerous energy-related materials. Recently, his research has started focusing on poroelastic effects in rigid ceramics, as well as structural health monitoring in harsh or complex environments, such as in storage casks for spent nuclear fuel rods.