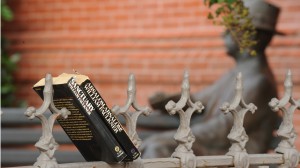 The Lafayette-Oxford-University community is gathering July 6 for a daylong series of events to mark the 50th anniversary of the death of William Faulkner.

“A William Faulkner Remembrance” is designed to promote reading and literacy as well as to honor Faulkner’s legacy and celebrate the role of the arts in lives of Mississippians.

“At least since he won the Nobel Prize for Literature in 1950, Faulkner has been an indisputable part of Oxford’s identity, and I believe that he’s now an integral part of the university’s identity as well,” said Jay Watson, Howry Professor of Faulkner Studies and professor of English. “His legacy has attracted writers to the area, dramatically enhancing the literary reputation of the community, and has helped recruit students to the university and new residents to Oxford and Lafayette County.

The Remembrance day program comes at the end of a week of events celebrating the 175th anniversary of the city of Oxford’s incorporation. Like those events, the Remembrance was conceived, planned and organized as a program for the general public and the local community, rather than for a specialized community of scholars or literary professionals. The day’s itinerary will connect the town, county and campus, along with other significant spaces from Faulkner’s personal history. The program will begin with a marathon reading of Faulkner’s final novel, “The Reivers,” on the grounds of his home, Rowan Oak.

Like the marathon readings of “Absalom, Absalom!” in 1997 (for the 100th anniversary celebration of Faulkner’s birth) and “Go Down, Moses” in 2005 (for the Mississippi Reads Initiative), the reading will draw on volunteer participants who will each read aloud a short section of the novel. Beginning at 6:30 a.m., it will unfold over an estimated nine hours. Refreshments will be served and tents will be set up to help keep everyone comfortable in July heat.

Following the marathon reading, participants will adjourn to the second-floor courtroom of the Lafayette County Courthouse, a building immortalized in Faulkner’s fiction, for a pair of keynote addresses at 4:15 p.m. Philip Weinstein, the Alexander Griswold Cummins Professor of English at Swarthmore College, will address the significance of the writer’s life and career.

After Weinstein’s address, keynote writer Randall Kenan will comment on Faulkner’s legacy from the literary artist’s point of view. Kenan is an associate professor of English at the University of North Carolina and a former John and Renee Grisham Writer in Residence at UM. In his fiction, Kenan has created a rural North Carolina community he calls Tims Creek, a domain that bears suggestive affinities with Faulkner’s Yoknapatawpha County.

Participants will reconvene at 8 p.m. for a “late show” screening of the 1969 film adaption of “The Reivers” (directed by Mark Rydell and starring Steve McQueen, Sharon Farrell, Rupert Crosse and Will Geer) at the Lyric Theatre on the Oxford Square. The Lyric has its own special place in Faulkner history, as the venue for the local premiere of “Today We Live,” the first film to be adapted from a Faulkner work, in 1933, and the international premiere of “Intruder in the Dust” in 1949.

During the Remembrance, university shuttle vans will run in a loop linking the Lyceum, University Museum, Rowan Oak and the Oxford Square.

The museum will host two exhibits in conjunction with the event. The first is a mixed media exhibit by Brooklyn artist John Shorb entitled “Absalom, Absalom!” in homage to Faulkner’s 1936 novel. The second is an exhibition of paintings by Faulkner’s wife, Estelle Oldham Faulkner. Many of her paintings have never been seen by the public.

Estelle Faulkner was known for painting, reading and playing the piano. She began painting while living in China in the 1920s with her first husband, a district judge, and later had her art studio in Charlottesville, Va.

All Remembrance events are free and open to the public , thanks to the assistance and sponsorship of the UM Department of English, the Center of the Study of Southern Culture, the Center for Writing and Rhetoric, the Mississippi Humanities Council, the Lafayette Oxford Foundation for Tomorrow, the Oxford Convention and Visitors Bureau, Vintage Books, First National Bank of Oxford, the Lyric Theatre, Larson’s Big Star and the city of Oxford.

The following day, July 7, kicks off the annual Faulkner and Yoknapatawpha conference at UM with a day of guided tours of “Faulkner country” in north Mississippi and Memphis.

This year’s conference, “Fifty Years After Faulkner,” also seeks to commemorate the anniversary by bringing together an expanded lineup of almost 60 writers and scholars to reassess Faulkner’s achievements and reflect on where the study of his work will be headed in the future.

Besides the lectures, talks, panels and tours, conference-goers will be treated to sessions on teaching and collecting Faulkner, an open mic night at Southside Gallery and exhibits at University Museums and the J.D. Williams Library’s Archives and Special Collections.

“It should make for one of the most memorable Faulkner and Yoknapatawpha conferences ever,” Watson said.