From the Lyceum to the White House: UM Choir Sings in D.C. 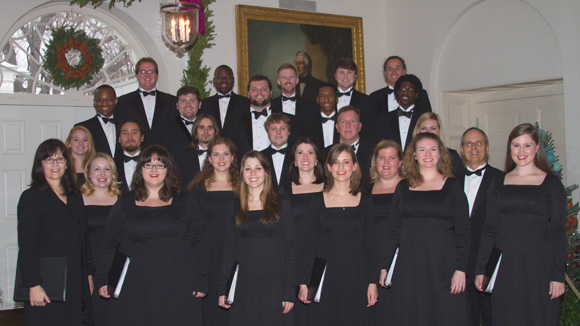 Singing Christmas music is common during the holidays, but for the 25 University of Mississippi choir members invited to sing in the White House Wednesday (Dec. 12), the experience was anything but ordinary.

Unexpectedly, the choir had the unique privilege of meeting President Barack Obama.

“When we arrived, our guide from the social office asked if we had a selection that was 30 seconds or shorter,” said Donald Trott, UM professor of music and director of choral activities. “When I asked why, she indicated that there would possibly be an opportunity to meet President Obama.”

At 4 p.m., the group was escorted to the diplomatic reception room, where they were positioned for a photo and given instructions on protocol when the president would enter.

“President Obama entered the room and in a joyful tone exclaimed, ‘Hello, University of Mississippi!’” Trott said. “He then continued by thanking the choir for coming and being part of their White House holiday. The president then shook hands with each member and took a photo with the choir.”

Everyone in the choir was thrilled and walked away with a lifetime memory.

“Words can’t fathom my excitement about this wonderful opportunity,” said John McMeen of Nashville, a first-year choral conducting graduate student who participated in the three-day trip to the nation’s capital. He and 24 others performed four hours of holiday choral music for a reception at the White House. The group’s repertoire included arrangements of familiar songs as “Joy to the World,” “Hark! The Herald Angels Sing,” “Silent Night,” “Little Drummer Boy” and “Sing We Now of Christmas.”

Years in the making, the event is the fulfillment of a dream for Trott.

“While teaching at Longwood University in Virginia, I made contact with a U.S. senator there who arranged for me to have a choral ensemble sing in the White House,” Trott said. “Ever since I began teaching here 11 years ago, I wanted to provide Ole Miss students with a similar opportunity.

“This year, I decided to pursue the possibility again. I must acknowledge (U.S.) Sen. (Roger) Wicker for helping secure our invitation to perform.”

Due to White House space limitations, the size of the ensemble was restricted. Trott could select only 25 to make the trip. Of those chosen, 18 had never been to the nation’s capital.

“Seniority was the main consideration,” Trott said. “I felt the graduating seniors and graduate students who might only have this one chance to do this most deserved the privilege of going.”

Having previously taken a group to Washington, Trott said he knew the wonders they were sure to experience while in D.C.

“It was an honor to represent the University of Mississippi in the White House in front of the President of the United States,” he said.