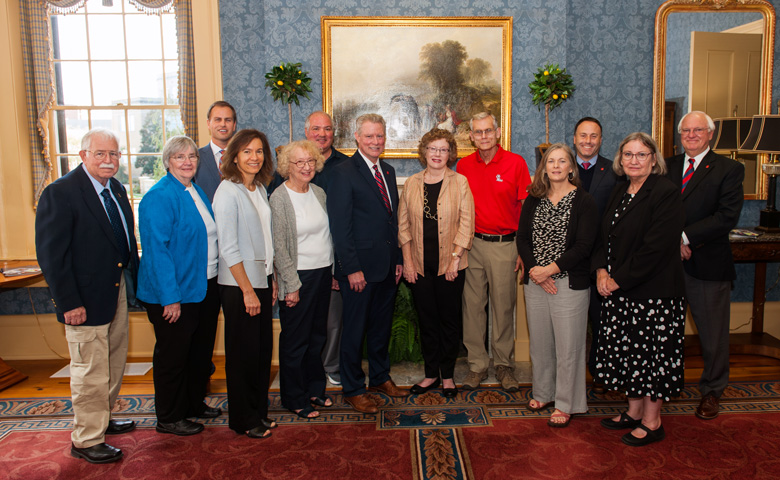 A University of Mississippi graduate’s major gift will honor two of his favorite professors while also supporting instruction in the fields of science, technology, engineering and mathematics (STEM).

With a gift of $1.5 million, Dr. Rhett Atkinson and his wife, Elaine, established the Doctors Andrew Stefani and Eldon Miller Memorial Chair for STEM Teaching and Research Endowment.

“My wife and I strongly believe in education and academics, and we want to give back to the institution that gave me the background and the tools I needed to be successful,” said Atkinson of Sedona, Arizona, who earned bachelor’s and master’s degrees in mathematics from Ole Miss in 1970 and 1972 and graduated from the UM School of Medicine in 1979.

The Atkinsons’ gift will provide income to the College of Liberal Arts to support the recruitment and retention of a top-tier scholar who demonstrates outstanding teaching in STEM and is also a productive researcher in biology, chemistry, biochemistry, mathematics, physics or astronomy.

“Lifelong learning and education are the keys to success,” Atkinson said. “We want to see Ole Miss continue to recruit outstanding teachers who can motivate and stimulate students to be interested in learning and encourage them to do their best.”

The endowment honors two such teachers: the late Eldon Miller, a professor in the UM Department of Mathematics for over 35 years, who was chosen Humanities Professor of the Year in 1990 and served as department chair on three occasions. The late Andrew Stefani retired from the university in 1997 as chair and professor emeritus of chemistry.

“Dr. Miller was my favorite math teacher and we got along extremely well. He challenged me to do the best I could and was very supportive. Under his guidance, I received the Alfred Hume Prize, which is awarded to the university’s most outstanding student in mathematics,” said Atkinson who studied organic chemistry under Dr. Stefani.

At one point, when Atkinson was trying to balance coursework with an extracurricular activity — managing his friend Glenn Galey’s campaign to be student body president — both professors “demonstrated the flexibility and caring that is so typical of our university. It’s for this reason I wanted to honor them and promote education at the university by providing a STEM chair in their names.”

Income from the endowment can provide support for salary supplements, research, creative activity, programs and more.

“We are extremely grateful to Rhett and Elaine for their generosity and support. Their gift helps us continue to provide quality educational and transformative opportunities in STEM fields,” said Interim Chancellor Larry Sparks. “It’s encouraging to see alumni who are so positively impacted by their educational experiences that they choose to give back so others may have similar opportunities.”

The new chair comes at an opportune time, with the university planning to build one of the nation’s leading student-centered learning environments for STEM education. Among factors driving plans is the crucial need on the state, regional and national level to increase graduates in STEM fields. The 204,000-square-foot building, which will join the Science District in the heart of campus, has an estimated price tag of $150 million. Private support is being sought for the state-of-the-art facility, which will serve all Ole Miss students with active learning classrooms and labs.

Atkinson grew up in Oxford, Mississippi, where his mother, Dorothy Atkinson, was registrar for the UM Graduate School for many years and his uncle, Rufus Jones, was the university’s first director of development. His aunt, Kittye Strickland, was assistant to then Head Football Coach Johnny Vaught; she later became the first female interim athletic director for NCAA sports at a major university.

In college, Atkinson attended 53 of 55 football games and kept the official statistics for the Rebels for seven years.

“I had great fun and I had the best seat in the stadium with all the chili dogs I could eat!”

Additionally, he was a member of Omicron Delta Kappa and president of Sigma Nu fraternity and was named National Sigma Nu Scholar of the Year in 1970. He was also Air Force ROTC Cadet Commander and a Distinguished Cadet.

After leaving the Oxford campus, Atkinson served the U.S. Air Force until 1975 when he also earned a master’s degree in business administration from the University of Santa Clara (California).  While serving in the Air Force, he met his wife, who at the time was a satellite programming engineer.

“Without Elaine, I’d be absolutely nothing; she is the love of my life. My biggest achievements are helping her raise three incredible children and practicing safe, high-quality anesthesia for 38 years at Stanford University Medical Center and in the Palo Alto, California, area,” Atkinson said.

Now, the Atkinsons enjoy outdoor activities in Sedona, including hiking and biking, both on- and off-road. In fact, Rhett Atkinson is a Mountain Bike Patroller with the Red Rock District and a preceptor for a youth mountain bike club.  He also volunteers with Friends of Forest, greeting visitors to the national forest around Sedona, and helps maintain and patrol forest trails. Additionally, he helps the AARP provide tax services for low-income elderly.

The Doctors Andrew Stefani and Eldon Miller Memorial Chair for Stem Teaching and Research Endowment is open to gifts from individuals and organizations. Checks may be mailed to the University of Mississippi Foundation, with the endowment noted in the memo line, to 406 University Ave., Oxford, MS 38655. Gifts can also be made online by visiting give.olemiss.edu.

For more information on supporting STEM, contact Denson Hollis, executive director of development, at dhollis@olemiss.edu or 662-915-5092.