From Finland to the Flagship 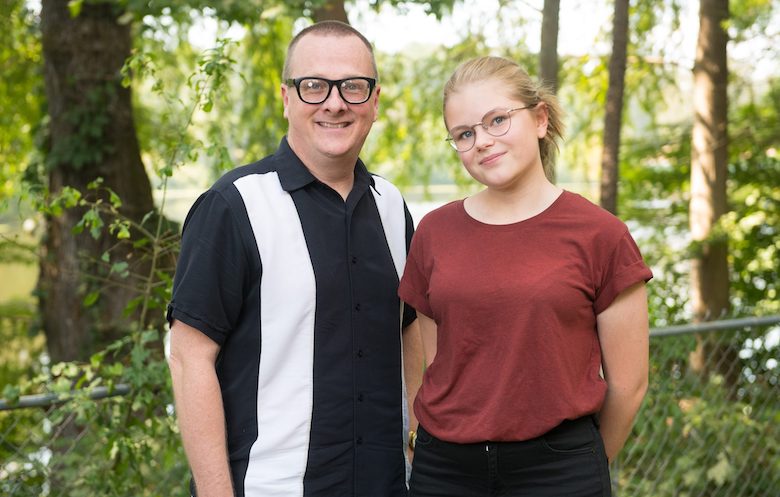 When Lance Herrington was in high school in 1986, his family hosted a visitor from a faraway land who would shape his life forever.

Pirjo Tupamäki had come as an exchange student from Jyväskylä, in the Lakeland region of Finland, to Herrington’s small hometown of Belton, Texas, a bedroom community between Austin and Waco. Pirjo became like a sister to Herrington, who is now an instructor and coordinator of instructional support in the University of Mississippi‘s Intensive English Program.

Years later, Herrington is still struck by the spirit of his friend, Pirjo, and the experience of having her live with his family in the 1980s.

Thoughts of a friendship formed long ago have cropped up recently for Herrington, and for good reason. This fall, Pirjo’s daughter, Teresa, boarded a plane and made the long journey from Helsinki to Oxford to study at UM, and live with Herrington.

The 19-year-old, who Pirjo named after her hero Mother Teresa of Calcutta, is finding her way around Oxford these days.

Herrington’s parents had struggled to communicate with Pirjo. Lance Herrington found himself working as a translator of sorts, which sparked his curiosity about teaching. Though he wasn’t conscious of it at the time, this steered him on the career path that eventually led him to teach.

“I could understand or intuit enough to know you couldn’t use idioms with her,” Herrington remembered. “I would know that what they use in English 101 textbooks is not going to be what is sometimes spoken in Texas or Mississippi. I guess maybe I’ve had an instinct for it in high school.”

He remembers fondly Pirjo’s love for the band Dire Straits, and she played their music on cassettes in her bedroom, where she would dance and sing along. She loved music festivals and also animals, including the Herringtons’ Spitz, who slept in her room every night.

“Pirjo was one of the kindest and most genuine people I’ve ever met,” Herrington said. “She was a gentle soul who lived life without pretense. As a teenager, she was positive and fun, and enjoyed life to the fullest.”

After she left the Herringtons’ home in Texas to return to Finland, the two stayed in communication. Sadly, Pirjo, who went on to become a social worker, died two years ago during her second battle with cancer.

Her daughter enrolled in the Intensive English Program program at Ole Miss thanks to the connection to Herrington.

The Intensive English Program offers a wide variety of instruction and support for students studying English as a second language. The IEP offers credit-bearing courses for students interested in improving their language skills for a short time or to move into one of the university’s degree programs.

The IEP also runs a Learning Center for international students who need additional help in any English language skill.

The Community English as a Second Language program, offered by the IEP, allows graduate students to get teaching experience while helping people new to the United States get a better handle on the language, and also how to handle new cultural situations they may encounter. The Community ESL program is free and open to adult relatives of faculty, staff and students.

Teresa, who experiences a form of dyslexia, is learning and is immersed in the environment of her new language through the ESL work. In Finland, English is commonly taught, and she made the minimum to pass but wants to hone her skills.

She has good command of the language, but with any foreign language, the writing and grammar part is trickier. She almost made an A on her English in Finland, but the only problem is there, an A is the lowest grade.

“In Finland, people are so good at English, but I am one of the ‘worst-est’,” she joked.

Teresa is thrilled to have an experience similar to what her mother had when she was about her age – coming to the American South as a teenager to study and soak up the culture.

“I think it is so cool to have the experience my mother had in coming to America,” Teresa said. “I won’t have exactly the same experience, but I’m so glad I had the chance to come here.”

But the new experiences aren’t all for Teresa; Herrington is having plenty of his own, including figuring out how to care for a teenager. For someone who doesn’t have children, that can be easier said than done.

One real benefit of hosting an international student is the months of relaxed conversation, which can lead to a greater understanding of each other’s cultures. Herrington is already seeing that, after having been around Teresa only a few weeks.

“The other night, she made reference to the Finnish Civil War,” Herrington said. “I’m an adult with a graduate-level education. I didn’t know. There was a Finnish Civil War? When was this? I thought when I went to bed (that) I was going to have to read about it.

“Still, there is so much I am learning that I didn’t know until Teresa and I had these kinds of conversations.”

He’s also helping her learn the language outside the classroom in everyday life. He believes she sells herself short, and he’s impressed with how she is handling the fish-out-of-water experience of being in a land where little to none of her native language is spoken.

“All of the students in our IEP program are all doing something I don’t think I could do in a similar situation,” Herrington said. “This all-English-speaking environment has really improved her confidence.”

It’s more than a classroom experience after all. It’s about becoming part of a new community. In Finland, Teresa was very active in Scouting, and here in Oxford, she has already connected with local Scouting groups such as UM’s Venturing Scholars and Boy Scout Troop 146.

She’s also been to Ya-Ya’s for frozen yogurt and out to eat in many of the town’s restaurants.

Food in America is different for her in several ways, she said. She’s never had to worry much about the nutritional values for food in Finland, but U.S. cuisine is much more decadent.

“When I’m in Walmart or Kroger, I always need to think about which one would be healthier because in Finland, everything is healthy; but here, I need to pay attention,” Teresa said.

She also believes American breads are too soft. She is used to hard rye breads in her homeland, but they are almost nonexistent here. She is learning to make her own breads though, to lessen some of the homesickness.

Herrington notes that food is one of the first items in a new land where culture shock happens. It makes sense. You need food to survive, so often you immediately hunt it.

For Herrington, he learned while in Japan that a lot of the pizza comes with corn on it. He never knew why, just accepted it as a reality of being in a different place with different culinary customs.

The two plan to travel to Belton during Thanksgiving break so Teresa can see where her mother learned all about America. Herrington’s parents still live in the same house, and they will see some of the same sites around town where her mother walked years ago, including her old high school, the classrooms and the gym where she practiced volleyball.

“I think it is so cool that I am going to exactly the same house,” Teresa said.

“As we can see from Mr. Herrington’s experience, he has built lifelong international friendships and lasting memories through home stays,” McElroy said

Herrington said he would encourage anyone to host a foreign exchange student.

“It’s an amazing opportunity,” Herrington said. “I know other families in Oxford that have hosted international students that have had such positive experiences. Usually, people who do it want to do it again and again.

“My hope is that years after Teresa, her younger brother will come and do something similar here.”