Freshman Out to Leave a Legacy at UM 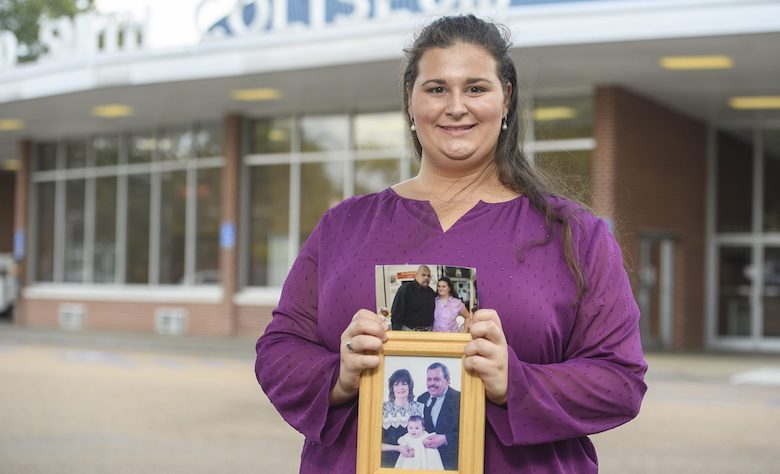 With every step of Leah Timmons’ journey at the University of Mississippi comes a reminder of the words of encouragement her father left her years ago.

“Being an only child, I’ve always been extremely close to my parents, especially my dad,” said Timmons, a freshman from Saltillo majoring in international studies and chemical engineering with an emphasis in manufacturing. “He was the one who always told me I could accomplish anything I set out to do. So much of what he told me shaped me into who I am academically.”

Timmons’ parents attended college themselves, but neither of them graduated. Following her father’s death when she was 12, their dreams of completing college and earning degrees became Timmons’ own.

It’s a goal Timmons has set not only for herself, but one that she knows will honor her father’s legacy.

“I know that if my dad were alive, he’d tell me to be my best at whatever I do,” said Timmons, a member of the Sally McDonnell Barksdale Honors College, Croft Institute for International Studies and Haley Barbour Center for Manufacturing Excellence. “His words are always in my mind.”

Timmons was the first National Merit scholarship finalist at Tupelo Christian Preparatory School and a STAR student who graduated at the top of her class and set a new record for the school’s highest-ever ACT score, a 35.

Timmons believes that coming to the state’s flagship university is one way she can reach her full potential.

“Ole Miss is where I need to be,” Timmons said. “I now have opportunities to become more.”

But before she could start preparing for life on a college campus, Timmons became intentional about being the best student in her high school, with hopes her involvement in school and with extracurricular activities would help her find the financial assistance needed to attend college.

“I became a peer tutor, working with as many as four students at least one hour each per week,” she said. “I also learned to play piano, sang in my church choir and participated in the Scholars Bowl academic competition and UM’s Summer College for High School Students program.”

While attending Summer College, Timmons met Ryan Upshaw, assistant dean for student services in the School of Engineering. He was immediately impressed with her academic record.

“She was a dynamic student who, I knew, we needed here at the university,” Upshaw said. “That’s why I offered Leah a Brevard scholarship in the School of Engineering.”

Timmons was still contemplating her options when Connor Phillips, coordinator of admissions for the Croft Institute, also began recruiting her.

“We are fortunate to have such a well-rounded and bright student here at Croft,” Phillips said. “Leah is planning to do something that has not been done before by combining international studies with manufacturing. Her confidence and tenacity shine in everything she does.”

Timmons also received other scholarship offers, but turned them down to come to Oxford.

Timmons, who said she never had to study in high school, is finding the university’s curriculum rigorous.

“For the first time in my life, I’m really having to study,” she said. “I spend an average of four hours per day now reading and reviewing subject matter for my classes.”

Still, Timmons is a typical student who enjoys reading, volunteering at the Ole Miss Food Bank, attending Wesley Foundation meetings and tailgating with her family at home football games.

“I stay in touch with friends I made in high school,” she said. “I tell the ones who were behind me that if they plan on joining me at Ole Miss, they need to learn how to study now.”

Because of her dual major, Timmons anticipates that she will take longer than the usual four years to earn her degrees.

“I know that the Croft Institute will require me to spend a semester studying abroad and an internship in a foreign country,” she said. “I’d really like to go to Spain.

“My dad, who was retired military, told me many stories about his time stationed in Europe. I’ve always wanted to go there because of what he said.”

Even though graduation is years away, Timmons already has begun setting goals for her future.

“I definitely want to go to grad school and earn my master’s, maybe even my Ph.D., in chemical engineering,” she said. “After I earn that degree, I may want to teach university-level courses at some point. But I think I’d rather go to work in the industry first.”

Whatever her future holds and wherever she goes, Timmons said she will continue to carry her father’s memory with her.