Freshman Intent on ‘Fulfilling Her Purpose’ 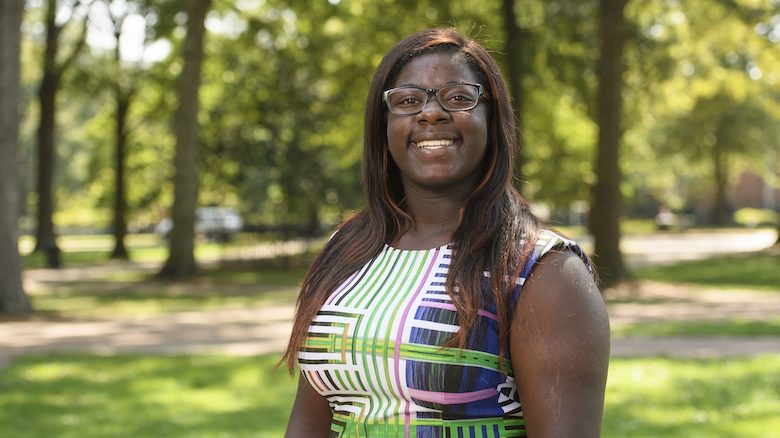 UM freshman Khadeejah Franklin is a biology major interested in pre-med with plans to minor in chemistry. Her ultimate goal is to become a neurosurgeon. Photo by Thomas Graning/Ole Miss Digital Imaging Services

“Remember your purpose.” That’s the advice University of Mississippi freshman Khadeejah Franklin received from her mother before leaving her hometown of Vancleave for Oxford.

“Stay focused,” Triniss Wilkerson said she told her daughter. “I also told her do not lose sight of the reason why she is there. It’s OK to have a little fun, but do not ever forget your purpose.”

That purpose comes in stages. A biology major interested in pre-med with plans to minor in chemistry, Franklin expects to earn her bachelor’s degree at UM and then go to medical school at the University of Mississippi Medical Center.

The ultimate goal? Becoming a neurosurgeon.

The Vancleave High School graduate has already laid a successful foundation for her future. Valedictorian of her 2019 class, Franklin was involved in and out of the classroom. She was in the Family, Career and Community Leaders of America club, and the Spanish Club; was a member of the Vancleave student council; and earned her membership into the Vancleave High School Hall of Fame and the National Honor Society.

She did all this while excelling in the classroom and playing varsity softball, basketball and volleyball.

“My key to making good grades and being successful in school was always keeping God first in my life,” Franklin said. “After keeping Jesus first, I had to put in the work. It took many long nights of studying after ballgames, waking up early to make sure all of my homework was finished and staying on top of my game in order to be successful in high school.

“It definitely was not an easy task. I honestly do not have any explanation of how it was all possible except for the fact that I had Jesus guiding my path.”

Wilkerson agrees with her daughter but notes Franklin also put in the work.

“She would not be where she is at if it had not been from God,” she said. “She studies a lot. She is a hard worker and puts God first in everything.”

Franklin had no previous connections to Ole Miss but was drawn to the university because of its great pre-med program. That and generous scholarship money attracted her to UM.

“I also really love the campus and how beautiful it is,” she said. “The University of Mississippi is about five hours from my home, which is not too close or far from home.”

Beyond her mother’s advice of not forgetting her purpose while in college, Franklin picked up other pieces of advice before making the journey to the university. That advice includes having good study skills, not stressing too much about the future, getting involved on campus and in the community, having an open mind about different things and never forgetting where she came from or what she believes.

While she has been on campus for only a few days, Franklin is already looking forward to the challenges and opportunities of college life. She is taking Biological Sciences I, a rigorous comprehensive study of modern biology’s major principles, and she said she would like to go on a mission trip or study abroad in the future.

“I hope to make a positive and memorable name for myself at UM,” she said. “I do not want to be just another graduate. I want to help make some type of change and leave this place better than when I found it.

“My initial impressions are nothing but positive. Everyone at UM is very sweet, genuine and helpful. I have made some associates who will definitely be around for a long time.”