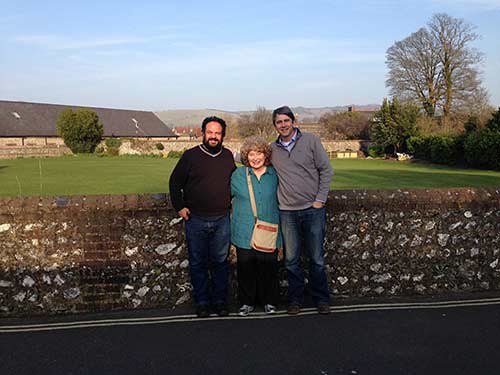 Scott Barretta (left) and Joe York with Shirley Collins in Lewes, England. Collins accompanied Alan Lomax on his 1959 trip through the South, during which the duo made the first-ever recording of Fred McDowell.

The life of hill country bluesman singer and guitar player Mississippi Fred McDowell is the subject of a documentary film by Scott Barretta and Joe York.

The idea for the film came about when the two discovered that the university owned a short film about McDowell called “Bluesmaker,” which was made in his longtime home of Como by Christian Garrison, who was a resident filmmaker for the university.

Barretta and York were interested in the Como community, and in particular, the Hunter’s Chapel, where McDowell was a member.

“McDowell made recordings with other members, including his wife,” said Barretta, an adjunct instructor of sociology and anthropology.

“Otha Turner, the patriarch of the fife and drum tradition in the Hill Country, was also a member, and the current preacher is (the) Rev. John Wilkins, a gospel bluesman whose father was pioneering bluesman Robert Wilkins. Joe and I covered all of this information in a ‘Highway 61’ radio show a couple years ago, and Joe filmed Wilkins and some other artists at a North Mississippi Hill Country Picnic.”

McDowell’s story is a fascinating one. He was a laborer who played local house parties, and for most of his life was relatively unknown. In 1959, Alan Lomax and his assistant, Shirley Collins, made his first recordings, and shortly after the recordings were released, McDowell went out on the festival and coffeehouse circuit. Hhe later traveled several times to Europe and was a major inspiration to artists including Bonnie Raitt and the Rolling Stones, who covered his song “You Gotta Move.” He has also been a major influence on guitarists who play in the bottleneck slide style.

“That’s the general arc of our story—from obscurity to international influence—and we’re trying to capture as many parts of it as possible,” Barretta said. “Earlier this year, we traveled to England, where our interviewees included Shirley Collins, now 79, who had wonderful recollections of McDowell’s ‘discovery.'”

Other interviewees so far include Oxford’s own Dick Waterman, who managed McDowell, and Wolf Stephenson, who booked McDowell at “tea dances” on campus when he was the social chairman of Pi Kappa Alpha fraternity and later recorded McDowell’s classic “I Do Not Play No Rock ‘n’ Roll” album at the Malaco studios in Jackson.

York, senior producer at the Southern Documentary Project at UM, has served as producer of “Highway 61,” Barretta’s radio show, for almost a decade, and they worked together some years ago on another film, “Smoke and Ears,” about the Big Apple Inn on Jackson’s Farish Street.

“We’ve both always been drawn to Fred’s music and his remarkable story, from his chance encounter with Alan Lomax that launched his recording career, through his influence on the Rolling Stones and Bonnie Raitt, to name a few, and his lasting impact on the culture and music of Mississippi,” York said. “We’ve traveled as far as San Francisco and London and parts in between recording interviews for the film and we couldn’t be happier with how well it’s coming along.”

Given SouthDocs’ commitment to tell stories about the region through food, literature and, in this case, music, it was finally the right time to make the film, York said.

The biggest obstacle is raising money to pay for the film clips and sound recordings of McDowell.

“We’ve discovered some film clips that are not even known to blues aficionados, and they don’t come cheap,” Barretta said. “I expect that we’ll be finished with the interview process by the end of this year, so hopefully the film can come out sometime next year.”